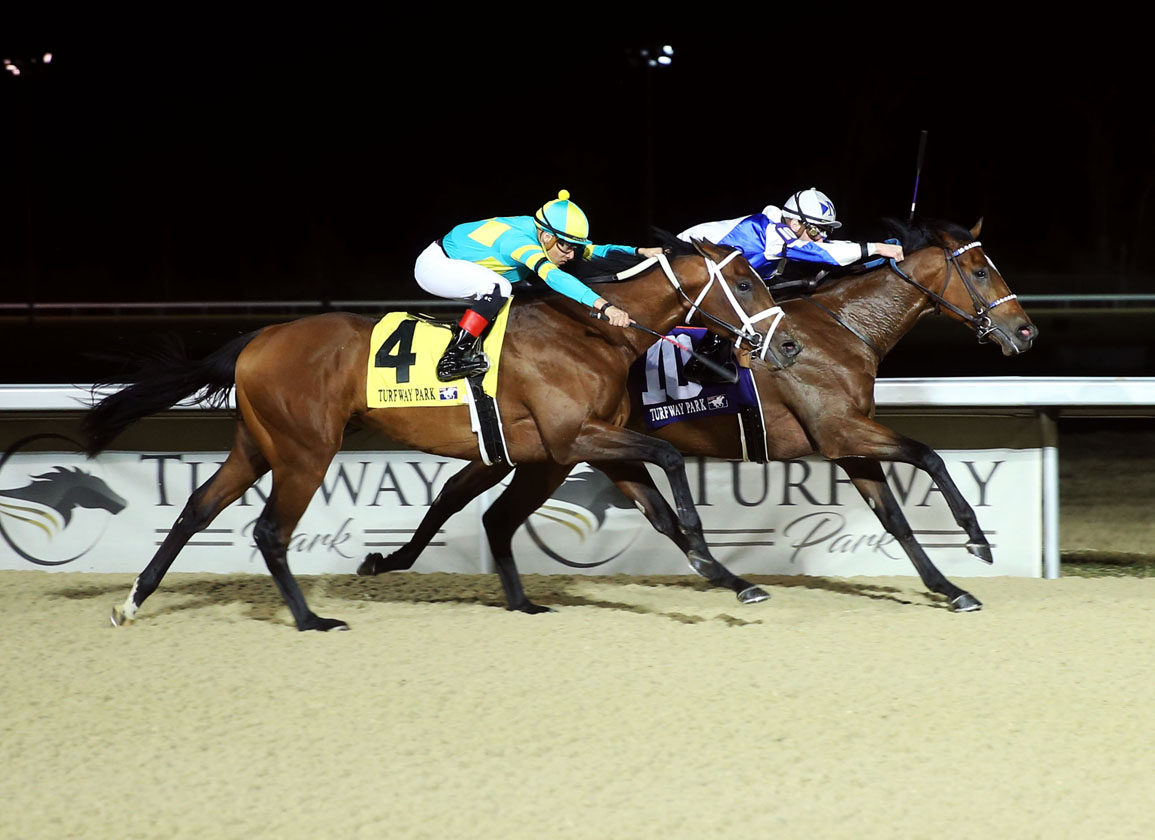 A veteran of just seven career starts, Tiz the Bomb (Hit It a Bomb) has already won races on dirt and turf and looks to stay perfect in two starts on the synth in Saturday's GIII Jeff Ruby Steaks at Turfway Park.

A $330,000 graduate of the 2020 Fasig-Tipton Selected Yearling Showcase, the bay aired in a rained-off event over the Ellis main track to graduate at second asking last July, then switched to the grass to take the lucrative Kentucky Downs Juvenile Mile Sept. 6 and the Oct. 10 GII Bourbon S. at Keeneland. Second–though pari-mutuelly first–in the GI Breeders' Cup Juvenile Turf, he flopped when seventh in the GIII Holy Bull S. Feb. 5 and took nicely to this surface when outgaming Bourbon runner-up and Juvenile Turf seventh Stolen Base (Bodemeister) in the Mar. 5 John Battaglia Memorial S. The latter adds blinkers Saturday afternoon. In addition to the Triple Crown, Tiz the Bomb holds entries for the G1 QIPCO 2000 Guineas over Newmarket's straight mile Apr. 30 and for the G1 Cazoo Derby going a mile and a half at Epsom June 4.

Dowagiac Chief (Cairo Prince) is the owner of the field's best Beyer Speed Figure, having earned an 88 for his five-length romp in the grassy Black Gold S. at the Fair Grounds Mar. 5. Fifth and beaten four lengths at 42-1 in the Bourbon S., the $110,000 Keeneland September yearling purchase is a full-sister to Cairo Diamond, who made each of her five career starts on the synthetic main track at Woodbine, coming from the clouds to break her maiden in what was her final appearance.

Red Run (Gun Runner) ran out a half-length winner of the Jan. 30 Texas Turf Mile last time, leaving Stolen Base and Dowagiac Chief behind in third and fourth, respectively. The Winchell homebred is meant to be any kind, as he is out of a full-sister to champion Untapable (Tapit); to GISW Paddy O'Prado (El Prado {Ire}), runner-up in the 2010 GI Toyota Blue Grass S. on the Polytrack; and to the dam of GSW Majestic Eagle (Medaglia d'Oro).

The outposted Blackadder (Quality Road), last-out winner of the El Camino Real Derby at Golden Gate Fields, is expected to scratch in favor of next Saturday's GI Toyota Blue Grass at Keeneland. The defection will allow Swing Shift (Midnight Storm) to draw in off the also-eligible list.