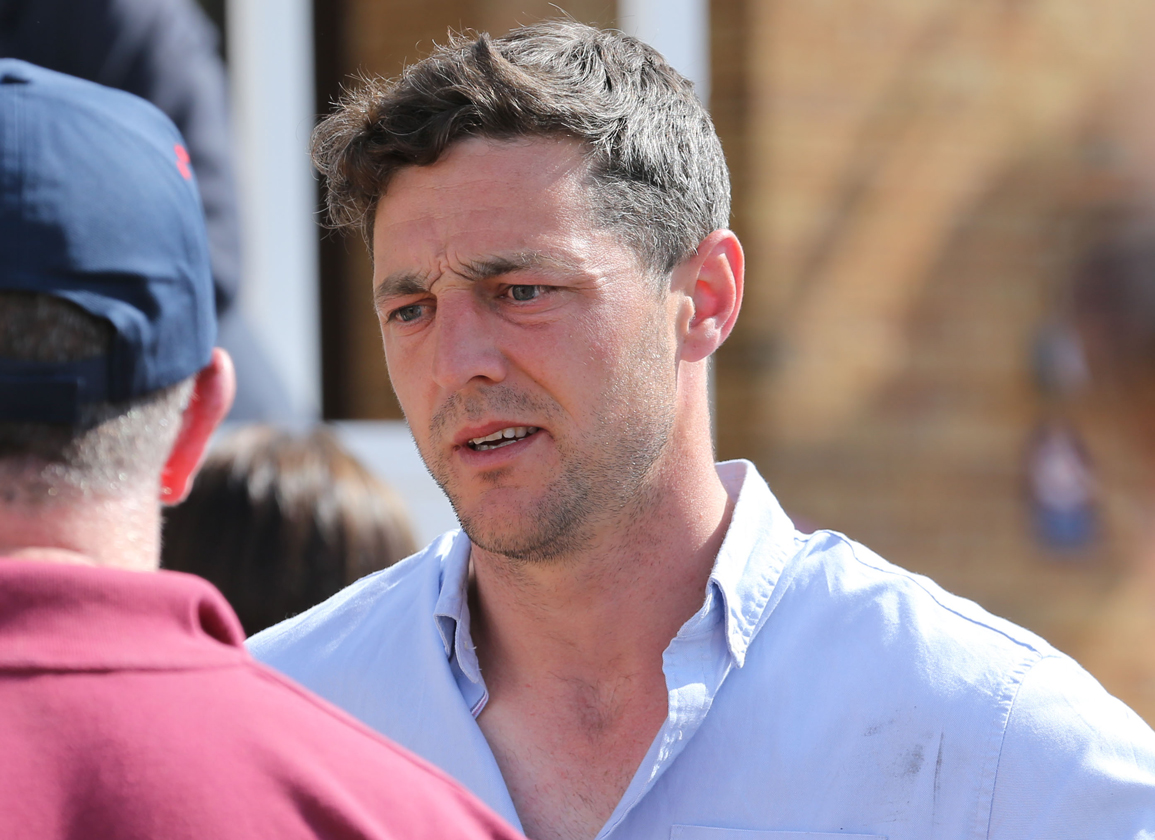 Justin Timmons: “I raced up here to try and pay for the nappies” | Tattersalls

TATTERSALLS, Ireland–Justin Timmons revealed the heightened importance to the Dolmen Bloodstock consignment selling well at the Tattersalls Ireland Goresbridge Breeze-Up Sale after he welcomed his first-born into the world in the early hours of Wednesday morning before making the dash to Barn B on the eve of what he described as the biggest sale of his year.

Dolmen Bloodstock consigned the top lot at last year's sale, a Dark Angel (Ire) colt who fetched 410,000gns, and now that there are nappies to pay for, Timmons is hoping for another profitable end to the breeze-up season.

Timmons nominated a colt by New Bay (GB) (lot 15) and fillies by Zoffany (Ire) (lot 184) and Harry Angel (Ire) (lot 119) as being the pick of Dolmen's six juveniles that will go under the hammer on Thursday and joked that, if the Harry Angel was to shoot the lights out, he may have to twist his partner Jody's arm to revisit the naming of their newborn from Harvey to Harry.

“I'm a relieved man and everything else is a bonus now,” said a visibly ecstatic Timmons after the breeze on Wednesday. “Mother and baby are doing well so I raced up here to try and pay for the nappies!

“It's our first child and Jody was helping all throughout her pregnancy. She was even riding out at the start of the pregnancy and, when she wasn't able to continue that, she was in the yard mucking out boxes. She's superwoman.”

Timmons added, “The little man is called Harvey at the minute but if the Harry Angel sells well we might have to change it to Harry. I was happy with how he breezed and, to be honest, I thought I brought a nice bunch of horses here this year so fingers crossed it works out.”

This sales season has been up and down for Dolmen Bloodstock, according to Timmons, who is quietly confident of signing off on the breeze-ups for the year with some strong results given he kept his best team for Tattersalls Ireland.

He explained, “I always try and bring a nice bunch here as it's our local sale here in Ireland and I always support it. It's one of the most important sales in our year.

“This year has been a bit of a mixed bag so far. The Craven Sale was a bit disappointing but the Guineas Sale made up for it. That's the way this game goes sometimes so hopefully we have a bit of luck tomorrow.”

Lot 15 is the only New Bay colt in the sale and was picked up by Jerry Horan at the Tattersalls Ireland September Yearling Sale at Newmarket for £15,000 while the Zoffany filly, out of the listed-placed Ermine And Velvet (GB) (Nayef), was sourced at the same sale for £14,500.

Speaking about his draft, Timmons said, “The New Bay, the Zoffany and the Harry Angel are all exciting. The New Bay is a fine horse. My friend Jerry [Horan] bought him at Tattersalls last year and he's a nice horse who does everything well at home.

“I was expecting him to breeze well and he did. He's the only New Bay colt in the sale and I think he is an incredible sire. He's only going one way.”

He added, “I've always been sweet on the Zoffany. She's a good-moving filly with plenty of boot, but I think she probably wants seven furlongs or even a mile. We galloped her last week on the Curragh, I rode her myself and I was taken by the fact that she actually quickened up twice. Not many do that.

“The Harry Angel is a ball of a filly. She's a real 2-year-old type and is only going to get better as the season progresses. She's on a real upward curve. They are the three I'm looking forward to most.”

He may be surviving on minimal if any sleep but you won't hear Timmons complain. In fact, if things go to plan on Thursday, he may even have time to celebrate what has been a whirlwind 48 hours.

“I'll be nipping back to Portlaoise Hospital this evening. I can't wait to keep an eye on Mammy and the little baby and there won't be much sleep. If these sell well on Thursday, there definitely won't be any sleep, we'll have to celebrate.”

The sale, of which Layfayette (Ire) (French Navy {GB}) is a deserving poster boy, being the most successful graduate following his Group 2 victory in the Mooresbridge S. at the Curragh this season, begins at 10:30 a.m on Thursday.

The best May foal I ever laid eyes on! Now it's time to head to @tatts_ireland to sell a few ✈️✈️. swing by Barn B! pic.twitter.com/fxXAbFfGvx