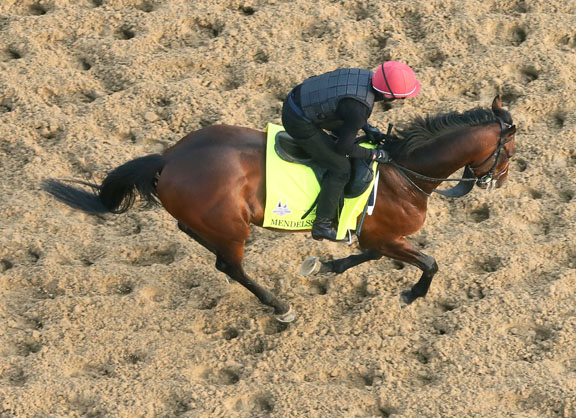 LOUISVILLE, Ky – Now that's how you make an entrance.

Mendelssohn (Scat Daddy), the blowout winner of the G2 UAE Derby, finally took his first spin beneath the Twin Spires on a very pleasant Thursday morning.

The striking bay, a $3-million KEESEP yearling topper and half-brother to the brilliant racemare Beholder (Henny Hughes), looked a picture and had his neck arched and was on his toes while jogging a clockwise 1 1/4 miles along the outer rail. He was accompanied to the track by three Aidan O'Brien-trained stablemates immediately following the private session reserved for the Kentucky Derby/Oaks runners at 7:45 a.m.

Just as he exhibited in the mornings prior to securing the GI Breeders' Cup Juvenile Turf at Del Mar last fall and his aforementioned score in the desert by 18 1/2 lengths, Mendelssohn was his vocal self and did plenty of whinnying (or shouting) as he made his way around the oval.

The Tabor, Magnier and Smith colorbearer did get a little hot and was lathered by his neck, but nothing alarming there as that's quite common when the Euros make their first trip to the track in the States, regardless of what the temperature might be.

Mendelssohn was immediately placed in quarantine at Churchill Downs after arriving from Ireland late Monday evening.

“We just wanted to get him out there and stretch his legs,” Pat Keating, O'Brien's head traveling lad, said while swarmed by reporters. “He's a good traveler and handles it perfect; very straight forward. He handles it a lot better than I do.”

The Ballydoyle trainer is expected to be at Churchill Downs Friday morning.

OK, so who's looked the best in the mornings this week?

If you ignore the pp's and the names on the yellow saddle towels, the three Derby horses that have made the best impression on the racetrack have been a trio of flashy chestnuts: the unbeaten 'TDN Rising Star' Justify (Scat Daddy), GI Florida Derby runner-up Hofburg (Tapit) and champion 2-year-old colt Good Magic (Curlin).

One quick look at Justify, a $500,000 KEESEP yearling, and that massive stride of his, you can immediately see why Hall of Famer Bob Baffert is on the record as saying that he's the best- looking horse that he's ever trained.

Juddmonte homebred Hofburg has been all the rage on the backstretch since arriving in Louisville and he's been galloping like he's owned the place since exiting his four-furlong breeze here Sunday.

Good Magic, a $1-million KEESEP yearling, has also given off plenty of good vibes in his gallops and looks like he's sitting on a career-best performance as well.

Click below to watch a TDN interview with bloodstock agent Jacob West: