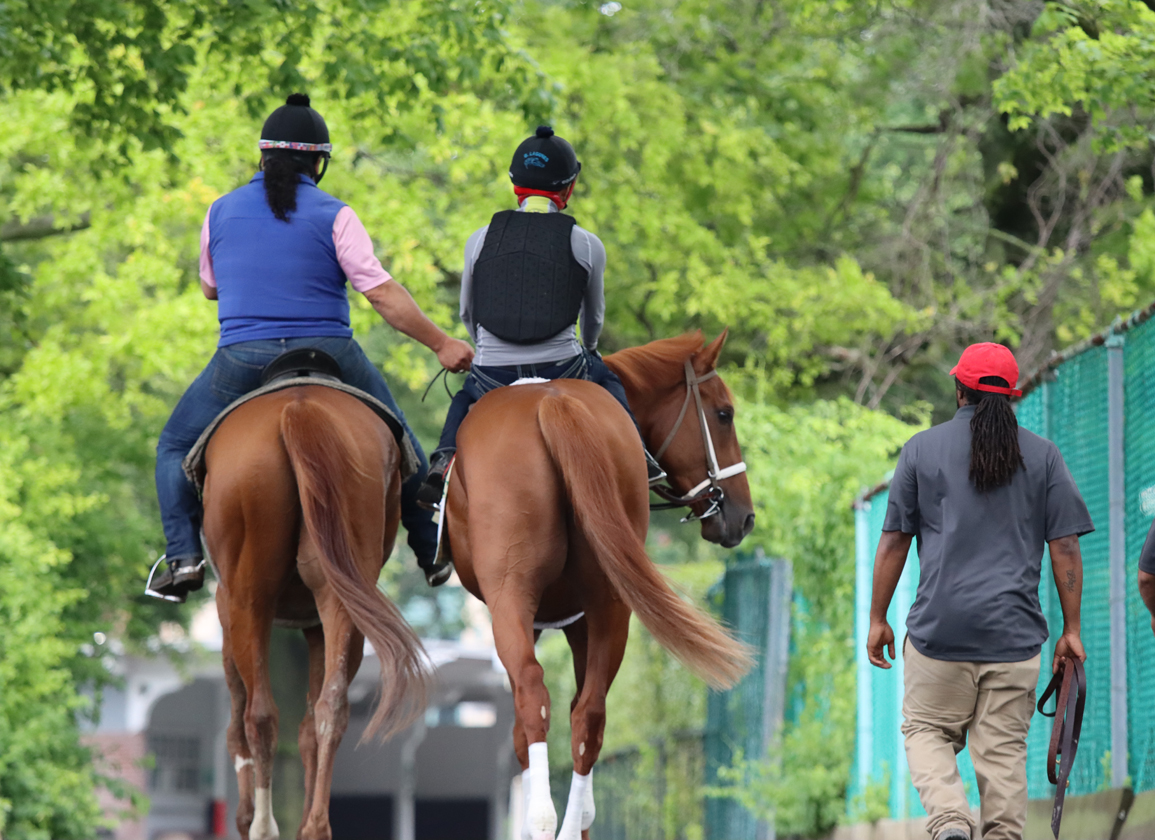 Making his way through the picturesque Belmont backstretch about 10 minutes later with a good-sized entourage in tow, Rich Strike entered the paddock via the tunnel as owner Richard Dawson and trainer Eric Reed, both sporting plenty of black-and-red Rich Strike swag, chatted by the famed Secretariat statue.

With torrential pre-dawn thunderstorms leaving the main track a sloppy-and-sealed mess, it was a second straight day of light training for the 7-2 third choice on the morning-line for Saturday's 154th GI Belmont Stakes.

“All we were doing today was getting a little maintenance work in him and he had to go school in the gate anyway,” Reed said outside of a sun-splashed Barn 29 after the chestnut was done getting cleaned up.

“With the off track, I didn't want to turn him around in case he decided to get real tough. So, we just went the mile-and-a-half in the wrong direction, stood in the gate and brought him home. Tomorrow, he'll have a little bit of a gallop.”

Rich Strike has breezed twice since shocking the world at 80-1 off the also-eligible list in Louisville, most recently working five furlongs in a bullet :59 at Churchill Downs May 30. The $30,000 claim-to-fame put on a show with an absolute powerhouse gallop at Belmont Park on Tuesday.

“That's what we call the 'happy gallop.' He'll do that once a week,” Reed said. “Two days prior coming off the track with normal gallops, he was rearing up. He was telling me, 'You haven't trained me hard enough.' We don't try to go that fast, we just let him have his way. Usually, he'll set his own pace, then he comes back to us after a little bit.”

After receiving plenty of criticism for taking the road seldomly traveled and skipping the GI Preakness S. with the Derby winner, Reed continues to have no regrets about heading to the final leg of the Triple Crown with a fresh horse.

“It wouldn't have worked with him,” Reed said. “It takes him three weeks to calm down. In a two-week turnaround, he would've been crazy in the paddock. He wouldn't have been behaving on the track. His mind would be way too aggressive and it would've jeopardized this race.”

He continued, “Not that we thought this was a race we couldn't lose. It just made a lot more sense because it was the proper time between races and we know he'll get the distance. Our problem is, he has a terrible running style for this race. Either he has to change it on his own or we have to get really lucky because you just don't come from last and win this race. Since the Derby though, he's a much different animal about how he does things.”

As far as life after the Triple Crown series for Rich Strike, following a break for a month or two, Reed has identified the GI Runhappy Travers S. at Saratoga Aug. 27 as his next potential target.

“Our intentions, if things go well, is to run him next year,” Reed said. “We don't want to stop at the end of this year. We're not gonna dance every dance and run every race, we're gonna pick the right ones and give it our best shot.”

It's almost been five weeks now. Kentucky Derby-winning trainer Eric Reed. How does that sound to you?

“I can't get used to that,” Reed concluded with a big smile.

“I've been real busy and I love what's going on for my guys. I haven't had time to step back yet. I'll get that chance after the Belmont. Then, I think it will all soak in.”

The runaway, front-running winner of a saturated renewal of the local GIII Peter Pan S. stood like a gentleman beneath trainer Rodolphe Brisset after entering the track through the paddock at 7:52 a.m. The 'TDN Rising Star' began to jog the wrong way with the pony about five minutes later, and, after schooling in the starting gate, came rolling down the center of the stretch outside of the dogs for another very good-looking, one-mile gallop.

While leading sire Tapit can't add to his already record four Belmont Stakes tallies this year, his presence will certainly still be felt Saturday. The Gainesway kingpin is the grandsire of both We the People and Kentucky Derby sixth-place finisher Barber Road (Race Day), and he is also the broodmare sire of the lightly raced Preakness third-place finisher Creative Minister (Creative Cause), respectively.

For more pedigree tidbits on the field of eight, stay tuned for Saturday's 'Where Did They Come From?' feature.