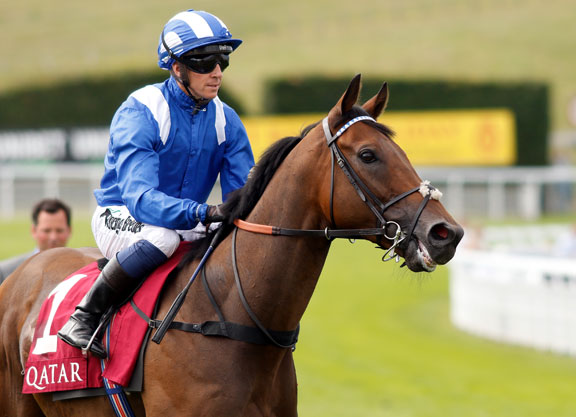 Keeping it simple despite all the pressure before Friday's G2 King George Qatar S., Jim Crowley steered Battaash (Ire) (Dark Angel {Ire}) to a record third renewal of Goodwood's speed test to bring more history to this prestigious meeting. Held on to initially as Ornate (GB) (Bahamian Bounty {GB}) provided a target to his left, Shadwell's dragster took control two out and found the line a half length ahead of the strong-closing Australian import Houtzen (Aus) (I Am Invincible {Aus}). “Everybody expected him to win by a large margin, but I didn't have to use my stick and he was idling and not doing an awful lot in front,” Crowley said of the 1-4 favourite. “I tried to keep something in the tank and he's getting better all the time. I'd have loved a lead and something to slipstream, but I didn't want to take him out of the race and he was just looking around. He loves it here and is the fastest five-furlong horse around.”

Eclipsing this race's legendary dual winners Abernant (GB) and Lochsong (GB) and the recent double merchant Take Cover (GB) (Singspiel {Ire}), Battaash joins Tuesday's G1 Goodwood Cup hero Stradivarius (Ire) (Sea the Stars {Ire}) in accruing three consecutive editions of one of the festival's key contests. With such a high-mettled racer, the margin between glorious victory and crushing disappointment in defeat is slim and the impressive manner of his wins only serve to augment the catastrophes of his reversals. He does have some glaring omissions from his resume, but the G1 King's Stand S. monarch Blue Point (Ire) (Shamardal) has been the reason for his failure to score at Royal Ascot while the last two runnings of York's G1 Nunthorpe S. have happened on rare off-days.

It is not inconceivable that the latest in a line of Shadwell sprinting stars will be able to add more editions of this to his record, with retirement a long way off and a new maturity seemingly coming into play. “I think he's gone a little bit the other way now–he was idling in front today–and that's a good thing as he can take his races better now,” trainer Charlie Hills said. “That was nerve-racking and quite emotional, as sprints are funny and anything can happen. It depends on the draw and where the pace is in the race, but luckily he got a lead for the first two furlongs and had control after. The second is a good mare and I suspect we'll have to take her on again at York.”

There is still time for the brilliant 2017 G1 Prix de l'Abbaye hero and winner of the last two renewals of Haydock's G2 Temple S. to make amends for his Nunthorpe flops and connections are set on a return to the Knavesmire next for the Aug. 23 event. “There are three or four left before the end of the season and York is a track that you would think is tailor-made for him,” Hills added. “I can't understand why he hasn't won there and am scratching my head, but he's not the first good horse to be beaten there. York is such a speed track and maybe the others eyeball him a lot sooner and the race doesn't suit. We need to be careful how we ride him there, but he's very lightly-raced really and is taking everything in his stride. He's much less stressed at the races. He is in a good routine at home now and we know what to do with him.”

Trainer Martyn Meade was excited by the effort of Houtzen on her first start for the stable and said, “She got bumped and had to go round, which didn't help but she's a fabulous mare. We thought she was going well at home, but you wonder if it's a fool's paradise and she's not as good as you think. We wondered how she would cope with the wide-open spaces of Manton, but she has absolutely flourished and ran an absolute blinder. I am hoping to run her again, but the idea was this run and then to put her in foal so I'll talk to the owners. I'd like to keep going with her for another couple of big races. She is a five-furlong horse–I think she was getting to the end of her tether there. I will have to twist their arm and see how convincing I can be. I'll get the old champagne out and hope for the best”

Battaash is the first foal out of Anna Law (Ire) (Lawman {Fr}), who is a half-sister to four black-type performers headed by Etlaala (GB) (Selkirk) who took the G2 Champagne S. and was third in the G1 July Cup for Shadwell. Her other half-sibling Bird Key (GB) (Cadeaux Genereux {GB}) produced another top-class sprinter to race in these colours in the G2 Duke of York S. winner and G1 Diamond Jubilee S. and G1 QIPCO British Champions Sprint S.-placed Tasleet (GB) (Showcasing {GB}). Anna Law also has Phoenix Thoroughbreds' unraced 2-year-old filly Valletta Gold (Ire) (Gutaifan {Ire}) in training with John Quinn and a yearling full-sister to Battaash.