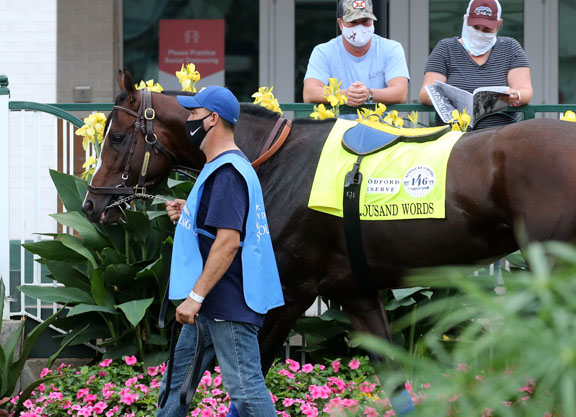 The adage reckons a picture to be worth 1,000 words. Of course, as has been remarked, that means 1,001 words must be worth more than a picture. (On which wiseguy basis, I will generously trade this column for that Rembrandt in your loft.) But then it might take something closer to 1,000 pages to record everything the owners of Thousand Words (Pioneerof the Nile) have experienced over the past year.

This colt gave a literal quality to their topsy-turvy fortunes when rearing and toppling in the Derby preliminaries, sending Bob Baffert's lieutenant Jimmy Barnes to hospital and himself back to the barn in mild disgrace. For the Albaugh family, the sudden deflation must have taken them back to the numbing split-second when Dennis' Moment (Tiznow), stumbling out of the gate, threw away a juvenile championship at the Breeders' Cup last fall.

Yet between those dispiriting bookends, their stable has been achieving some quite remarkable things–so much so, in fact, that success for Thousand Words in the GI Preakness S. would perhaps put Dennis Albaugh in contention for an Eclipse Award of his own.

Last month, in the space of three days, Dale Romans saddled two Ellis Park debut winners to follow up in graded stakes at Churchill: Sittin On Go (Brody's Cause) in the GIII Iroquois S.; and Girl Daddy (Uncle Mo) in the GIII Pocahontas S. In the process, each earned the first 10 starting points for the 2021 Derby and Oaks, respectively.

By the time those gates are secured and opened, perhaps, we might finally be restored to those simple indulgences past that now seem so decadent; measurable, as well as anything, by the notion of a crowded infield on the first Saturday in May. But if the whole of society can't get ahead of itself, right now, then certainly nor can those whose aspirations are contingent on a conveyance as unpredictable as the Thoroughbred.

The Albaughs won't need telling that, not least after Sittin On Go's success earlier on the card intimated that the force might be with Thousand Words in the GI Kentucky Derby. In the event, they were reserved the cruellest portion of the hollowness that must have filtered from the deserted grandstands into the hearts of all those whose privilege, in making that coveted walkover, had been rendered so bittersweet.

But our business is all about the long game. And the kind of calls that these guys are making will surely flatten even such bumps in the road as unaccountable as the slips and flips of Dennis' Moment and Thousand Words. Because even with an unbeaten colt and filly on track for the Breeders' Cup, the Albaugh family's potential impact on next year's Classic scene could prove to be broader still.

The way Not This Time has started at Taylor Made, we could be looking at one of the most exciting young stallions of recent times. I can't resist repeating that I've been in his corner throughout, annually banging the drum in our midwinter stallion survey. And he has overcome even that ruinous disadvantage to set a searing pace in the freshman's championship. His 13 scorers from just 27 starters to date are headed by the brilliant Princess Noor, at $1.35 million the most expensive 2-year-old by a rookie ever sold at OBS.

While there's plenty of Nerud-Tartan dash in his family (two of Ta Wee's five named foals put her 2×3 behind his second dam), the beauty about Not This Time is that he is so eligible to consolidate this early promise–in terms both of build and pedigree, as a Giant's Causeway half-brother to Liam's Map.

In his own track career Not This Time had already introduced the Albaughs to the rough with the smooth: he won an Ellis Park maiden and the Iroquois, just like Sittin On Go, but then narrowly failed to run down Classic Empire (Pioneerof the Nile) at the Breeders' Cup (ceding first run, the pair seven lengths clear) before being forced into premature retirement by injury.

He's out of the family's foundation investment, Miss Macy Sue (Trippi), a $42,000 2-year-old who became a graded stakes sprinter. Mr. Albaugh bought out his racing partner and resolved to give the young mare every chance with her first covers: A.P. Indy, Unbridled's Song, Medaglia d'Oro, Giant's Causeway. And that's what I love about this operation: they came into the business with no pretensions, from Iowa, but bank on old-fashioned quality in a way that reproves many a Bluegrass horseman who cheapens the breed in slavish pursuit of fashion.

Now it turns out that you can have the best of both worlds. The Albaughs appear to have produced a legitimate commercial heir to Giant's Causeway; and, in the sire of Sittin On Go, may yet give us a second.

Brody's Cause, similarly, would succeed for the best of reasons: he was bought as a yearling as the son of a proven stallion, from a regal family. Go back to his fifth dam, in fact, and you'll find a Bold Ruler half-sister to Somethingroyal.

He stands at Spendthrift–the family's partner, incidentally, in pushing a seven-figure boat out for Thousand Words as a yearling–and the Albaughs supported him at market by giving $65,000 for his very first foal, a January 11 colt bred by and delivered at Wynnstay Farm, as a weanling at the Keeneland November Sale. Returning him to the same ring last September, they set a reserve at the same price, only for bidding to stall at $62,000. That's how Sittin On Go is still in their stable; that's how these ups and downs can even out.

Let's not forget that Thousand Words had soured in the spring and would not have lined up for a May Derby, either. Turning him round to beat poor old Honor A. P. (Honor Code) in their Derby prep has been an achievement commensurate with the Preakness record beckoning Baffert. But Romans, the family's principal trainer, may yet prove equal to an equivalent challenge with Dennis' Moment, who returned to the worktab just this week.

That colt, remember, is by Tiznow–who shared one of the great Breeders' Cup duels with Giant's Causeway. Proper stallions, these, as favored by proper horsemen. Between Romans, bloodstock agent Barry Berkelhammer, and Albaugh's son-in-law and racing manager Jason Loutsch, this is an exemplary crew. And if Mr. Albaugh is already building a legacy, that's because his team are using durable, high-caliber materials: proven stallions, deep families, speed that will stretch through a second turn.

So there's one picture that really would be worth a Thousand Words–and that's one that shows him draped in a blanket of Black-Eyed Susans.