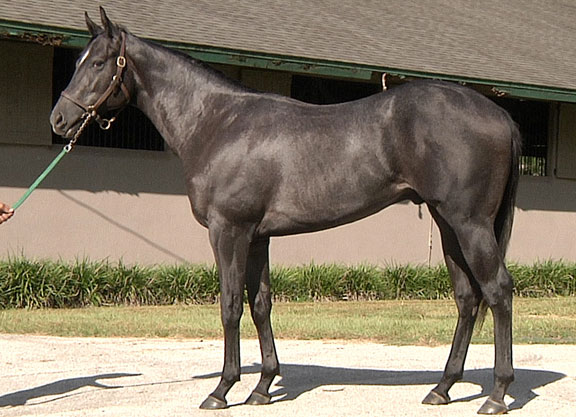 A colt by popular young sire Cairo Prince (Pioneerof the Nile) out of a mare who was purchased for just $1,000 fetched a record final bid of $340,000 from leading owner John Oxley to top Tuesday's select session of the OBS October Sale in Central Florida. Oxley also acquired the 2017 OBS October topper, going to $275,000 for Strike Silver (Violence), who in the 12 months since just missed in the GIII Sanford S. ahead of a worst-to-first victory in the Oct. 7 Indian Summer S. at Keeneland. The previous record of $335,000 was established in 2000.

Seven unique buying entities accounted for the session's nine six-figure horses, and Wojciechowski views that variety as a positive step in the right direction.

“One of the goals in moving the sale from August to October was to increase that buyer base and that's something that we're working on,” he said. “We are starting to see some positive aspects with that.”

Similarly, the day's top nine horses were each by a different sire, including a pair of Florida stallions–in one case a sire that has since been relocated to Kentucky.

“We were very happy to have such a nice variety of horses,” said Wojciechowski. “We had the Cairo Prince and an American Pharaoh, but it's also nice to see a sire like Uncaptured and other more tried-and-true sires like Kitten's Joy.”

The first of two open sessions kicks off Wednesday at noon. For full results visit www.obssales.com.

Sales-topping hip 138 was consigned to the October sale by Stuart Morris, agent for the partnership of J. R. and Katie Boyd's Brick City Thoroughbreds and Stuart and Meg Turlington's Stoney Lane Farm. The quartet teamed to purchase the colt privately from his breeder Mulholland Springs.

“We picked him out of a group of horses,” Boyd said. “He just looked really fast, a big walk, great physical. We loved his hip and his sire. They raise seriously good horses there at Mulholland Springs and they are very easy to work with.”

The group, who sold a colt by Lea for $200,000 at Keeneland September, said the Cairo Prince represented their biggest success to date.

“He well exceeded our expectations,” Boyd said. “We thought $150,000 or $200,000 max. Chad Johnson from OBS came very hard for this horse. He said this horse would sell very well and he sure was right. Stuart Morris did just an outstanding job with the colt and we thank the Good Lord, OBS and Mulholland Springs!”

Boyd is the stepson of Robby Harris and he credited his stepfather and his late mother Mary with being his mentors. Likewise, Turlington attributed his success to the teachings of his father Ed, who passed away three years ago.

“We really feel like there were a couple of angels watching over us,” Boyd said.

Nothing Upsetting About Minutia…

By her own admission, Mulholland Springs's Martha Jane Mulholland had her eye on a Quiet American mare either side the newly turned 4-year-old filly Minutia (Concord Point) at the 2016 Fasig-Tipton February Sale. To Mulholland's utter surprise, it took only the upset bid of $1,000 to take home the filly, an earner of just over $9,000 at the races.

“I was there to buy a pretty mare and I thought it was just ridiculous that she was selling for that price,” said Mulholland, who bred Tuesday's topper. “When we got her home, it was hard to figure out which mare cost $80,000 and which cost $1,000, she was that pretty.”

There was much to like about the mare's colt from the outset, Mulholland said.

“He was a stunningly beautiful colt, extremely powerful with a really classy head,” she recollected. “And I always thought Cairo Prince would make a good stallion and I have always had a lot of confidence in Brereton Jones,” she added, referring to Cairo Prince's stallion home at Airdrie Stud.

“I'm thrilled for J.R. and his partners and I hope to high heaven he runs well,” she concluded.

A Summerfield-consigned filly from the second crop of Canadian Horse of the Year Uncaptured (Lion Heart) was hammered down to Barbara Banke's Stonestreet Stables for $210,000 to lead the session's fillies. A half-sister to the stakes-winning It's High Time (Gone Astray), hip 145 is out of a half-sister to GISW Black Seventeen (Is It True) who was bought back on a bid of $7,000 when carrying this foal at the 2017 OBS Winter Mixed Sale.