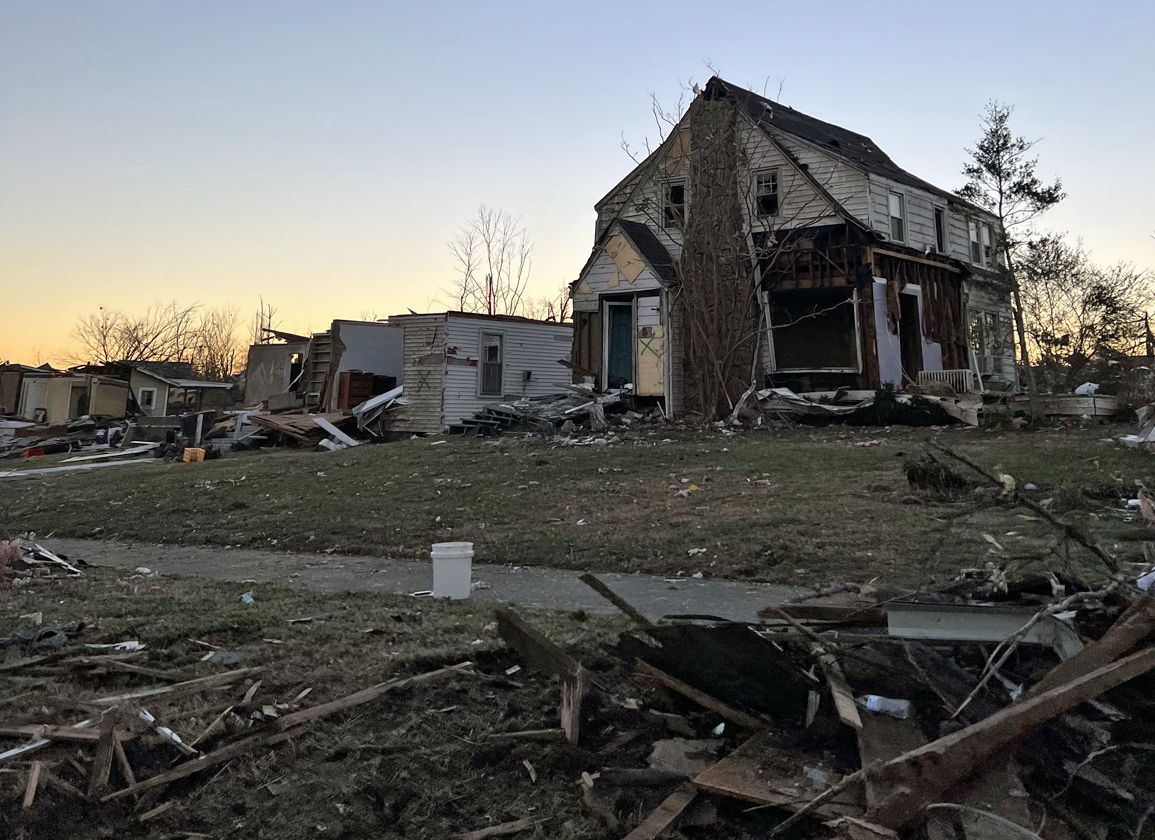 Destruction from the Dec. 11 tornado in Mayfield, Kentucky

LEXINGTON, KY–Kentuckians across the Commonwealth woke up with a text on Saturday morning: 'Are you okay?' For most, it was an uneventful night aside from perhaps being awakened once or twice to the sound of high winds. But for some, unimaginable destruction and immeasurable damage occurred overnight as a catastrophic tornado hit western Kentucky.

As of Friday, 77 Kentuckians have lost their lives due to a storm that is expected to have affected an estimated 227 miles, according to WLKY News.

Bradley Boyd, a professional Quarter Horse trainer based in Princeton, Kentucky, sent his children to the basement Friday evening when he heard news of the approaching tornado.

“The tornado passed about a mile behind our place,” the horseman recounted. “I watched it pass at 10:21 that evening; I'll always remember the time. By 10:40, I'd had a phone call from one of my best friends. It had killed three of his horses and his place was just gone.”

As Americans awoke the next morning to news of the devastation, Boyd drove to what was left of his friend's farm.

“By the time I got there, they had caught their horses so we just went digging stuff out of their house,” he said. “It's heartbreaking to see people who build and build and have it all taken at one time. It's heartbreaking. But to watch the horse community come together since this has happened, it has been incredible. It's one of my favorite things about the horse community is that when it comes to these horses, everyone steps up.”

It didn't take long for the Thoroughbred community to jump into action. On Sunday, the Kentucky Thoroughbred Association launched a GoFundMe page to aid in the relief efforts, kicking the fund off with a $7,500 contribution.

“It's something that the Thoroughbred industry has done in the past, most recently this February when there was some major flooding in Southeast Kentucky, ” said KTA Executive Director Chauncey Morris.  “We have a bit of experience not only in raising funds, but in figuring out what exactly to do with them when emergency strikes.”

As funds started to pour in, Morris got in touch with Don Campbell, a Thoroughbred trainer from Princeton and the next-door neighbor to Bradley Boyd, to find out what the immediate needs were for horse owners and farms in the area.

“Our farm didn't really have any damage,” said Campbell. “You can't even count it compared to what other people have. Most of the people who got hit lost everything–houses, barns, fencing, all their supplies, trailers, cars. It wasn't a typical Kentucky tornado where something gets torn up and something else gets left behind. It was more like if you were in the path of it, you just got wiped out. You can see the pictures, but it's nothing like it is in person. It's like a war zone. ”

Chauncey, Campbell and Boyd arranged to open up Boyd Performance Horses as a supply distribution center.

“Chauncey had told us to be ready because  they were going to send a bunch our way,” Boyd said. “I told them to bring it on and that we would make it happen one way or another.”

Since Tuesday, the KTA has organized shipments of hay, grain, water hoses, dog food, fencing and various supplies, working with agricultural centers in the area to help distribute incoming supplies to surrounding communities. 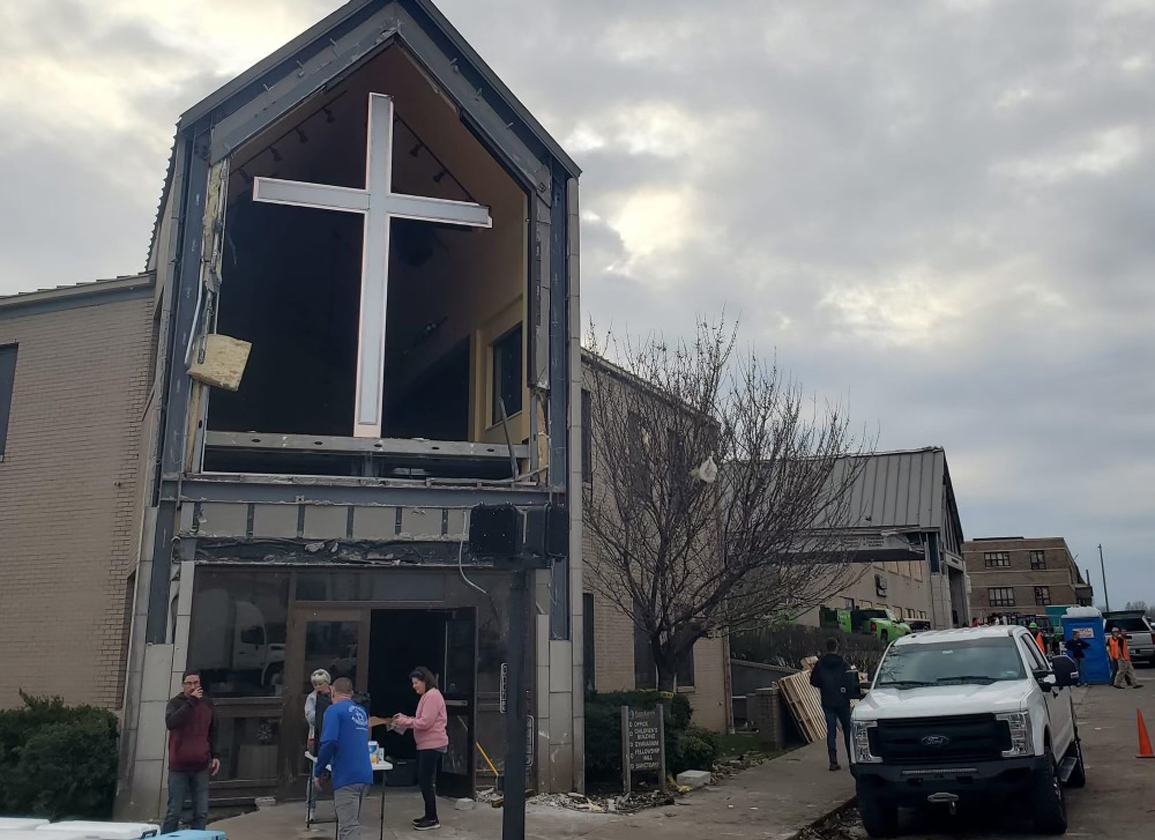 A church in downtown Mayfield, Kentucky

“The ag centers are sending people here to come pick things up and everyone is just overwhelmed with how much support we're getting,” Campbell said. “But still, we're getting more calls than we have stuff. I had 40 buckets sitting in a barn that I had kept over the years. I took them over to the distribution center and they were gone after an hour.”

“Just today alone, we've probably sent out almost 20,000 pounds of feed between hay and grain,” Boyd said on Thursday. “We're glad to be able to help in any way we can, but without Donn and the KTA, we wouldn't be able to do any of this right now.”

“We just heard that a semi-load of treated fence posts will be here on Monday,” Campbell said. “Chauncey has been ringing my phone off the wall to see what our needs are. I'm not talking about them sending a few pickup loads. Everything they're wanting to do is with semis. The way the Thoroughbred industry has stepped up has been unbelievable. That's the best way for me to put it and I'm proud to be a part of it.”

While the KTA will continue to provide necessary supplies for farms in western Kentucky, they are also beginning to look towards the future to determine how to best allocate their growing funds as the rebuilding process begins.

“We're taking care of immediate needs now, but for the medium and long term, we know that historically, federal disaster relief doesn't always pay for everything and some people fall through the cracks,” Morris said. “FEMA and SBA programs do not generally pay for people who are renting their apartments, homes or trailers. So that's where hopefully we can come in and help.”

Morris explained that the custodian for the funds raised through their GoFundMe will be the Foundation for Appalachia Kentucky. The Hazard-based organization is the same group the KTA worked with when they raised money for flood relief earlier this year and the program has already partnered with another organization in Paducah called the Community Foundation of West Kentucky.

“The scale of this disaster is so big and our industry generally has a very big heart,” Morris said. “Here in Kentucky, it's not lost on anyone just how good things are in the Thoroughbred business since the HHR bill was passed. We have a lot to be grateful for and this is our way of being good citizens of the Commonwealth of Kentucky.”

The KTA's GoFundMe has received major donations from outlets including The Jockey Club,  Juddmonte Farms, Stonestreet Farm, Godolphin and Lane's End. Spendthrift Farm gave what is currently the largest contribution with a $100,000 donation.

“This is a terrible tragedy and our donation represents our entire farm and our dedication to our brothers and sisters in need,” said the farm's owner Eric Gustavson. “We so appreciate the KTA, UK and every other organization that has stepped up to serve.”

“It's awesome to see the Thoroughbred business come together and raise so much money for those whose lives have been turned upside down,” Claiborne President Walker Hancock said. “In times of need, we are quick to lend a hand, which makes me so proud to be a part of this wonderful business.”

Hancock was featured on a local news outlet this week after discovering a family photo in one of the farm's paddocks on Saturday morning and suspecting that it might have come from an area affected by the tornado.

“I saw some mares sniffing it, I thought it might be a piece of trash I didn't want them to ingest so I jumped the fence and grabbed it and sure enough it happened to be this picture,” Hancock told WKYT on Wednesday.

Relatives of the two children in the photograph saw the story run on WKYT and notified the family, who lives over 100 miles away from Claiborne in Campbellsville, Kentucky.

Thanks to those that retweeted/shared the picture found on the farm. Relatives recognized the picture and notified the family. They live in Campbellsville, KY which is 101 miles away from us! @WKYT ran a story and helped us find the family @ChadHedrickWKYT https://t.co/6ypX1rbXHz

Another high-profile stud farm in Lexington has helped raise awareness for the KTA relief fund as Coolmore's Ashford Stud auctioned off a 2022 season to Triple Crown winner Justify with the proceeds benefitting the fund. The bidding was announced on Monday and closed on Friday, with a winning bid of $95,000 from Craig Bernick. Additional bidders included Ken Donworth, Dennis Drazin and Bobby Rankin.

Coolmore will be making an additional donation along with the proceeds raised from the Justify season.

“One of the greatest things about this business is that even though we are competitors in certain aspects, when times are tough and the need is there, the horse business shows great solidarity,” said Coolmore's Adrian Wallace. “It's great to see farms, veterinary practices, breeders and trainers come together to help out. Western Kentucky has been very good to the horse business and it's time that we show our appreciation and help out where we can. Even though it won't bring these lives back, hopefully it will help ease the suffering that a lot of these people are going through.”

Other racing organization have also stepped up in the past week. Breeders' Cup donated $50,000 to disaster relief efforts, splitting the donation evenly between the KTA fund and the University of Kentucky's “Kentucky United for Tornado Relief” telethon, and the Kentucky HBPA donated $25,000 to the Team Western Kentucky Tornado Relief Fund organized by Governor Andy Beshear's office.

Several fundraising events have been organized by Lexington's equine community and will be happening in the coming weeks.

Multiple equine-related groups including the Kentucky Horse Council have joined forces to organize a supply drive for equine-specific needs. Donations including buckets, winter blankets, halters, lead ropes, wheelbarrows and water hoses can be dropped off at the Kentucky Horse Park's Alltech Arena from 8 a.m. to 5 p.m. on Dec. 18 – 20. Donated goods will be delivered on Tuesday by Brook Ledge Horse Transportation. Learn more here.

On Sunday, Jan. 2, Frank & Dino's restaurant in downtown Lexington will serve complimentary food and drinks from 12 p.m. to 8 p.m. All proceeds will benefit the families in Mayfield, Kentucky affected by the tornado. Owner/breeder/trainer and Frank & Dino's managing partner Carlo Vaccarezza spoke with the TDN on Thursday regarding the event.

As of Saturday afternoon, the KTA's GoFundMe had surpassed $308,000 in funds raised with over 290 donations made. Click here to view.