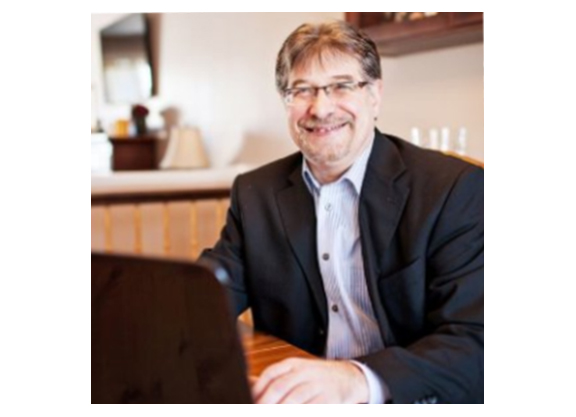 For decades, the horse racing chicken littles have been proven wrong with their “our patrons are dying off” narrative, but the tide is changing and racing needs to be ready for it.

Alarmism is defined by the Merriam Webster dictionary as the “often unwarranted exciting of fears or warning of danger.” If we turn on the news or open an online magazine, we see it almost daily. It's everywhere.

Racing is certainly not immune to alarmism, and the narrative that racing does not attract a younger customer is one which has led to many fantastical claims. Year after year, decade after decade, we've been told that one day soon everyone will die off and Kentucky Derby ratings will be lower than that of Matlock reruns; attendance for the Breeders' Cup will consist of horsepeople, a few octogenarians and a half dozen barn cats; that when the game's patrons get older and pass on, it's over.

This, in large part, hasn't happened. Sure, racing is not as popular as it was once was, but revenue keeps chugging along; this despite the fact that many fans and bettors born in 1930's or 1940's are no longer with us.

I think the alarmists have been wrong for several reasons:

• Racing has always enjoyed a quasi-monopoly in the skill game gambling market, i.e. if you want to play a legal brain game, the sport is right in front of you, licensed in almost every state. Others have not been so lucky.

• In the online, connected age–an age in which only 20 short years ago Amazon.com didn't exist, and Mark Zuckerberg was in grade school–racing, through the Unlawful Internet Gambling Enforcement Act, has continued to exploit its carve out.

• The sport has been regulated since the early 1900's and this has had many benefits. Regulatory capture has helped the business, and states have long depended on horse racing for revenue. Racing is the devil the regulators and politicians know; slot machine revenue didn't go into general state revenues, it went to racetracks for this very reason.

The above pillars have allowed racing to hold an advantageous position in the wagering market. As regular, everyday patrons pass on, the top of the funnel keeps getting stuffed with younger customers eager for skill-game wagering opportunities.

Racing has owned its space.

Although this has worked well for decades, I'm here to submit that we are seeing cracks in racing's near impenetrable wall. I believe there's strong evidence that the alarmist “we need to get younger or die” message is finally very real.

The Numbers Are, Frankly, Staggering

A couple of weeks ago I had the pleasure to present on a panel at the World Trotting Conference in Prince Edward Island. A co-presenter on my topic–“A Brave New World, New Ways to Bet on Horses”–was Chris Lush, Senior Vice President of Technology, Wagering and Broadcast for Woodbine Entertainment Group. A part of Chris's presentation focused on demographics for Woodbine's nationwide betting ADW, and it was eye-opening.

From 2009 to 2017, Woodbine has garnered the most business from those above the age of 60, with the over-50 set holding their own. This in itself is not new news. But what was most worrisome was that the top of the funnel for this lifetime pursuit we all enjoy has been sputtering–the 20's to 40's segment is seeing negative growth. 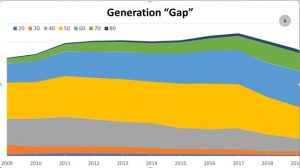 What caused an audible gasp from a few in the audience was when Chris extended the graph, as below: 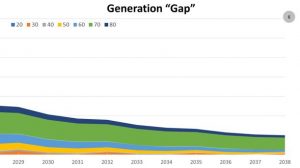 Based on analysis of Woodbine's current trends, in two decades wagering will be a fraction of what it is today, with most almost all the betting giant's patrons over 60 years of age.

To Woodbine's credit, Chris shared what he and the executive team was working on to slow this trend and capture new markets. However, the takeaway was very obvious. A quarter century ago this graph would've never existed.

What Has Changed in 25 Years?

In the late 1960's and early 1970's, lotteries and gaming expansion occurred, with both governments and smart entrepreneurs looking for new revenue. Despite these new competitors, racing soldiered on. I believe one reason it did was because horse racing was not a slot machine or a lottery ticket; in fact, it's probably the antithesis of a slot machine or a lottery ticket. Horse racing commonly attracted a completely different gambler and that gambler–outside betting with his or her bookie, or flying to Vegas to play poker–had little choice in the matter. It was racing or bust.

Forty or so years later, this is no longer the case:

• While Las Vegas slot machines and table games stagnate, betting on sports is flourishing. From 2006 to 2016–which includes the years of the great recession–handle on sports in Vegas casinos has doubled. This market, which is now offering in-game betting and other innovative ways to wager, appears to be only scratching the surface of what's possible. This doesn't even include the likelihood that sports betting will become legal in the not so very distant future.

• Fantasy sports–something played for years by engaged sports fans–became more mainstream and lucrative through Daily Fantasy Sports, or DFS. This form of gambling has grown from no handle in 2009, to over $3.2B last year.

• While you and I may have played Atari in our basements, others do things a little differently in the present day. More people play the “League of Legends” than live in France, and video game markets with highly challenging game play have exploded in popularity. This has spawned a new betting medium called “E-Sports”. Wagering on team play is slated to grow rapidly in the coming years; with a bull case scenario calling for over $13.6B in handle by 2020. 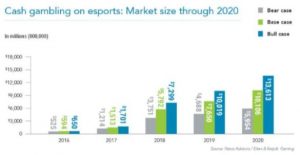 Why Does This New Type of Betting Attract Millennials in Such Big Numbers?

As I explored in a previous column, today's under 30s are not remotely comparable to the same demographic of even a half generation ago. These millennials have grown up in the smartphone age and are smarter in science, math and computing than any generation before them.

Jeff Hwang, an expert on this burgeoning gambling market, postulates that there's never been a more savvy generation when it comes to wagering, and this group is acting rationally. They tend to avoid high-hold games of chance and are more attracted to games of skill, but only if these games are priced right with something he calls “skill-based pricing”–where the game compensates for that skill. This, in part, he believes, explains some of the growth we've seen in sports betting or E-Sports, while at the same time slot machine revenue has fallen.

As horse racing (or other skill games) bettors we are hard-wired a certain way. Today's millennial is not much different than Pittsburgh Phil a century ago seeking out an edge; not different than Andy Beyer in 1970 trying to figure out how he can gain an advantage using the variant of a racetrack to standardize time. The main difference is that the Andy or Phil of 2017 has a choice of games to play where they can use their skillsets to their full potential. And many of these games represent much better value than horse racing.

Back in the early 1980's I was 12 or 13 years of age, sitting up in the grandstand, dutifully reading the past performances. An old-time railbird commented to my chaperon that he didn't see too many kids at the track reading the PP's, and that the game would be dead in 20 years. I didn't believe him, or the long line of those who followed him professing the same opinion. But, in 2017, I must confess, I'm coming around. The gambling world is changing rapidly, and so are those who patronize it. Horse racing needs to be ready.

Dean Towers has been a board member of the Horseplayers Association of North America since 2008. Dean would like to thank Chris Lush and Woodbine for allowing him to share the screenshots in the above piece.