Home » Archive » Shared News » This Side Up: Travers Win-Win Offers Choice of Honors

This Side Up: Travers Win-Win Offers Choice of Honors 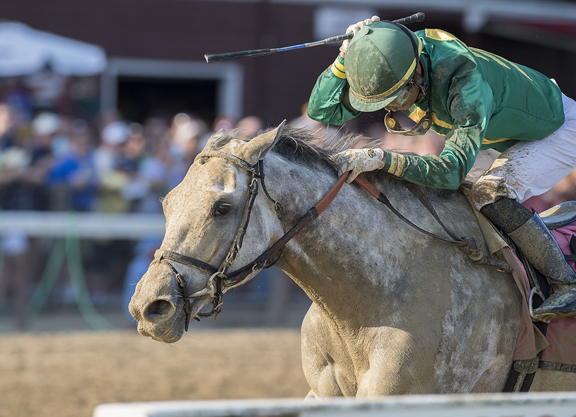 Lack of clarity isn't the same as lack of quality. A crop that produces a standout sophomore will sometimes be weaker than those, like the current one, that rotate the laurels. Either way, however, we should as usual have a better sense of where we stand after the GI Runhappy Travers S.–where the Classic veterans will either prove themselves to have been too faintly praised, or allow a later developer to come along and pick up the pieces.

Certainly the Aug. 24 showdown should help to identify who bears the standard into a clash of the generations at the Breeders' Cup. And that, potentially, is a win-win situation for William S. Farish and his team at Lane's End, who approach the Travers with a foot in both camps.

On the one hand, they have Code of Honor (Noble Mission {GB}), who was promoted to second in the GI Kentucky Derby, albeit he then sat out the rest of the Triple Crown series and appeared to show his gratitude in the GIII Dwyer S. At the same time, they have perhaps the most exciting of the slower-burning 3-year-olds in Highest Honors (Tapit), whose Saratoga reconnaissance in the Curlin S. the other day–circling the field, on his first start outside maiden company, and looking hungry for a tenth furlong–suggests that he's now kindling a pretty hot talent.

All remaining well with both colts, you can rely on Farish to let them square up; and may the best man win. People sometimes deceive themselves that they can protect their commercial interests by keeping their top horses apart, but Farish is enlightened enough to know that sportsmanship can bring incidental dividends. Because whatever one of these colts might lose from their encounter, the other stands to gain infinitely more.

As such, it's intriguing to wonder which of the pair would most gratify their breeder with success in the Travers.

Code of Honor has emerged from the first crop of Noble Mission as a priceless advertisement for the transferability of a pedigree shared with the great Frankel. Everyone is talking a good game about the growing importance of turf racing in the U.S., but so far it's largely proved just talk in terms of dollars and cents at the sales. Kitten's Joy was the premier American sire by earnings in 2018, but #34 by yearling average; English Channel was #22 by earnings, and #139 by yearling average.

That's a pretty depressing market, if you were launching Noble Mission as a pure turf influence. With his freakish ability to carry speed, however, Frankel was perhaps as ideal a dirt horse as never left “the weeds.” Noble Mission, if obviously not having quite the same dash, had a similarly relentless style. And, paired with a dirt sprinter, he has immediately produced one of the best Classic types of his crop.

For now, nonetheless, you suspect that Highest Honors might have the superior commercial traction of the Travers pair, as a stallion prospect for the farm. Because at stake for the gray is not just a run at the divisional championship, but eligibility to join the young stallions jostling to be considered the premier heir to Tapit.

For here is a horse very much bred for the opportunity before him. His pedigree is strewn with the kind of names you want to see underpin any stallion. That of Mr. Prospector three times, for a start, while the first three dams are all by glorious broodmare sires: Dixieland Band, whose daughters have produced Kentucky Derby winners Street Sense and Monarchos; Miswaki, sire of the breed-shaping mare Urban Sea; and, oh yes, Damascus!

Now there's a bedrock for any Travers colt. Damascus won the race himself, of course, equalling the track record even as he coasted home by 22 lengths. And, while his own attempt to extend the Teddy sire line has sadly tapered away, many of his sons proved conspicuously fertile broodmare sires. This is pretty consistent with the whole Teddy line, which has struggled for sires of sires despite three Triple Crown winners: Citation, and the father-and-son pair, Gallant Fox and Omaha. Typically Sir Gallahad III (Fr), a son of Teddy, sired Gallant Fox from his first crop but ultimately relied for his impact on his daughters, topping the broodmare sire list for a decade.

Sons of Damascus to have made their principal mark as distaff influences include Ogygian, broodmare sire of Johannesburg among others; Desert Wine, whose Group 1-winning daughter Flamenco Wave produced three others herself; Private Account, serial sire of champion females; and Bailjumper, no kind of stallion really but right there as damsire of none other than (Travers winner) Medaglia d'Oro.

Bailjumper was out of a mare named Court Circuit. She was by the British import Royal Vale, largely forgotten now but in his time capable of keeping Tom Fool honest in more than one finish. Court Circuit, bred like Damascus by Edith W. Bancroft, extended an important family cultivated by her father William Woodward Sr.'s celebrated Belair Stable. Her third dam Vicaress, for instance, was a Spinaway S.-winning half-sister to champion Vagrancy; their dam, in turn, the Man o' War daughter Valkyr. And Valkyr was a granddaughter of the great matriarch Frizette.

Court Circuit remained a faithful mate to Damascus, once their first foal had turned out to be the prolific sprinter Honorable Miss–whose subsequent siblings included not just Bailjumper but also the unraced Syrian Dancer.

Syrian Dancer was acquired by Farish in the early days of Lane's End, in 1985. He culled her in 1991, but that spring she had delivered a Miswaki filly, Exotic Moves, who was a stakes-placed winner in the Farish silks before being sold on. Evidently the Lane's End crew kept an eye on the family–Syrian Dancer's New York-bred, $6,200 half-sister Angel in the Night (Bet Twice) won 13 times in 17 starts–because Farish bought a Dixieland Band filly out of Exotic Moves at the Keeneland September Sale in 1999 for $200,000.

He called her Tap Your Feet, and she won three times including at black-type level. Her first foal, by Rock of Gibraltar (Ire), was dual Grade I winner Diamondrella (GB), and soon after came Bonnie Blue Flag (Mineshaft), twice placed at the elite level. Both, having been sold as yearlings, became seven-figure broodmares. By the time Tap Your Feet's son by Tapit came to the Fasig-Tipton Saratoga Sale in 2017, then, not even $750,000 was enough to seal the deal.

So it is that Farish, who would generally be looking to sell colts, finds himself with two homebreds for the Travers. (Code of Honor stalled at just $70,000 at Keeneland that September.) What was presumably a pretty white-knuckle call on his reserve has so far been amply vindicated by Highest Honors. Chad Brown, indeed, told Jose Ortiz that he was about to ride his Travers horse way back in April, when narrowly beaten on debut at Keeneland.

Ortiz himself needs to make a big call on the kind of standard, as established in the Classics, that must now be met by Highest Honors. Because he has also been riding Tacitus–another son of Tapit, just behind Code of Honor in the Kentucky Derby and since second in the both the GI Belmont S. and, after a rough trip, the GII Jim Dandy S.

Perhaps Ortiz will heed the sense of destiny that might also have governed the original decision to send a mare named Tap Your Feet to Tapit, whose own mother is of course named Tap Your Heels.

For Farish, no doubt, sending the resulting colt into the Travers alongside Code of Honor will be like watching Gene Kelly and Donald O'Connor tapping their heels, side by side, in Singin' in the Rain. Personally, I always thought O'Connor the better mover, even though Kelly would doubtless stand at the higher fee. And it's not hard to picture the less tested, less feted of the Farish pair–the O'Connor, so to speak, to Code of Honor's Kelly–ultimately coming away with the Oscar.