Home » Archive » Shared News » This Side Up: Too Much Heart for Most, Too Much Head for the Rest 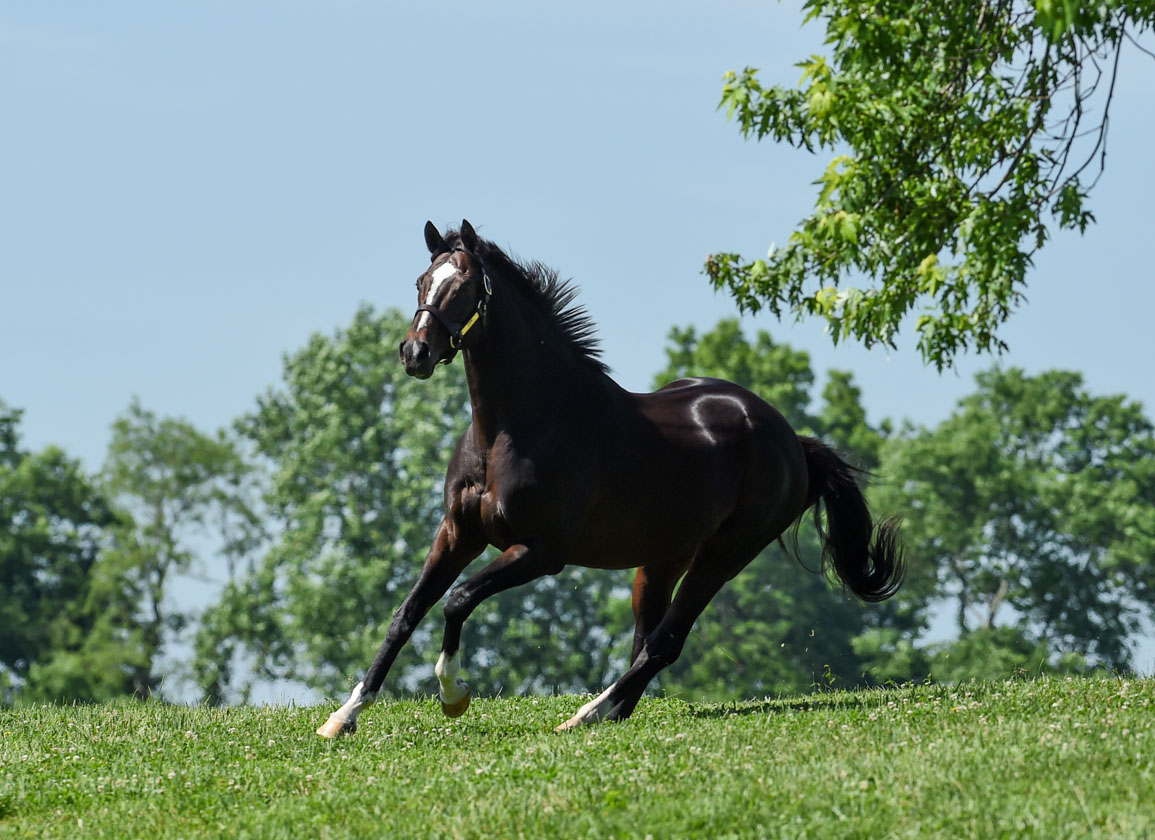 Most who fit that description are good; just not quite as good as they think. But you showed an indomitability rooted, not in arrogance, but in an awareness that the odds of life are seldom easy; that the crown must be earned, not just ceremonially conferred. In your case, it just needed a little extra by way of circumference.

The retirement from stud of Tiznow (Cee's Tizzy), announced this week, is poignantly timed. In a few days' time, a fresh name will be carved on the roll of honor for the GI Breeders' Cup Classic, on which Tiznow remains the only one to recur. It looks a vintage edition, but for many of us it will be difficult to suppress an inner hollowness to match the empty stands.

Tiznow was a monster of a racehorse–starting, of course, pretty literally with his daunting physique. His unique double in the Classic, in fact, was secured by an aggregate roughly commensurate with that triceratops skull of his: a neck verdict over Giant's Causeway (Storm Cat) in 2000 and a nose over Sakhee (Bahri) the following year. Either of those duels would qualify among the most stirring you'll ever witness; to share authorship of both makes Tiznow one of the most memorable Thoroughbreds of the modern era.

Most runnings of the Classic, naturally enough, will not measure up to those two years. Yet simple iteration, the renewal of a ritual in our calendar, makes every Breeders' Cup an authentic milestone on the road of life; and a true pilgrim of us mere railbirds.

I will never forget watching the 2000 Classic alongside one of the nicest people I know, another Englishman, who had bet Tiznow to win; halfway down the stretch, he suddenly started hollering for Giant's Causeway. Here, wonderfully, was someone renouncing financial gain for the sheer excitement he would have discovered in a success as bold as the one that so nearly fell within the reach of the Iron Horse.

For it was to the Europeans that Tiznow was most truly monstrous. By a desperate margin, his ogre's snout consecutively confounded two of the most audacious adventures undertaken by the rival powerhouses of racing in Europe. Giant's Causeway admittedly carried some versatile influences, but Sakhee, who had won the Arc by six lengths 20 days previously, was saturated with staying grass blood. Yet the connections of both understood the essential transferability, between different surfaces, of class. 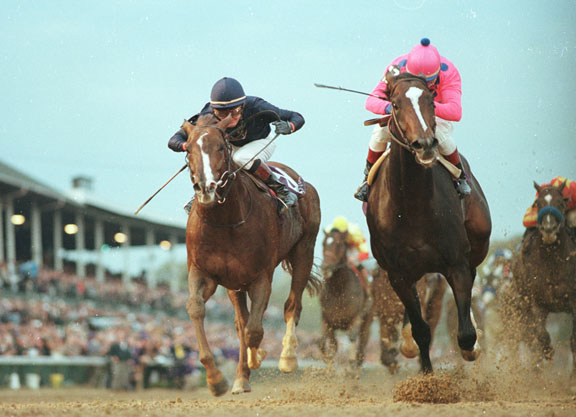 Nonetheless I soon found myself borrowing and reversing my friend's generosity of spirit. Who could begrudge a horse as lion-hearted as this? After all, when he went to WinStar, Tiznow invited the whole business to see the bigger picture.

Because the whole package demanded a fresh look at what makes a Hall of Fame dirt runner: this hulking Cal-bred, offering to extend the perilously attenuating Man o' War line through a mare whose frankly peculiar antecedents (first four dams by Seattle Song, Nice Dancer, Pia Star and Tompion) would meanwhile coalesce into something quite remarkable.

At the time, even such a terrific record on the track could not qualify a son of Cee's Tizzy, who had himself stood for $1,500, for a higher opening fee than $30,000. And nor could the success of Tiznow's stock, including 14 Grade I winners and many bombshell sales yearlings, ever get him into the six-figure club. Though he landed running, with first-crop champion Folklore sealing the freshman's championship, his rugged and rangy foals had the ostensibly uncommercial virtue of thriving with maturity. Tiznow himself was unraced at two and Well Armed, for instance, waited until six to gild that debut crop with the G1 Dubai World Cup.

But as Tiznow began to replicate his sterling attributes (often through fairly mediocre mares), so we all grew in admiration for the work of Cecilia “Cee” Straub-Rubens, who had purchased both his sire and dam as yearlings.

A real dynasty, then, blossomed unfeasibly in the strips of sunlight cast between the steel-girder limbs that supported the raking stride of its principal scion. Who knows which layers of soil have been most fertile?

Some credit, perhaps, can go to the second dam of Cee's Tizzy: the prolific Chilean import Tizna was not only still operating at a high level at age seven, but apparently also set a template with a blaze and four white feet. Cee's Tizzy fractured a knee in the Super Derby but standing opposite Tizna in his pedigree is Relaunch's very influential dam Foggy Note, also familiar in the pedigree of Tapit; between them, these mares made 88 starts.

Behind Cee's Song, equally, you find conspicuous durability in her Argentinian roots. Her fourth dam, for instance, made 133 starts across seven years; and her half-brother was none other than Crimson Satan, whose footprint we recently noted in the family of the flourishing Dialed In. He, too, had teak qualities as a champion juvenile who proceeded to win 18 of 58 starts. Other siblings raced 92, 89 and 72 times respectively. 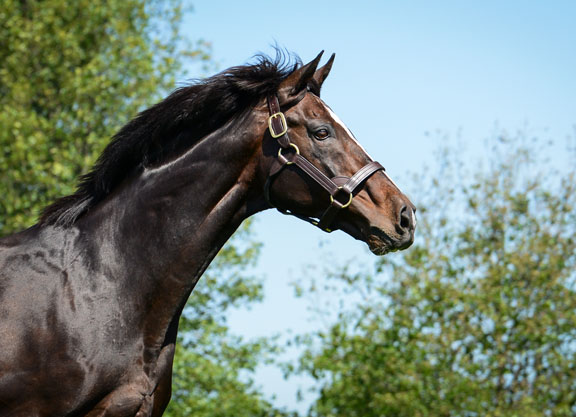 Such are the goods filtering into the 21st Century through Tiznow. Obviously the stakes are pretty high for one of his sons to maintain the viability of a sire line ultimately tracing to the Godolphin Arabian–soon, perhaps, in as much danger of asphyxiation by the Darley Arabian hegemony as that of the Byerley Turk. In Kentucky, Tourist and Strong Mandate still retain every chance; and of course another heir may yet emerge from Tiznow's final crops, conceivably even Dennis' Moment (back on the worktab and eyeing the GI Pegasus World Cup) if he retrieves his juvenile promise. In the meantime Tiznow is advancing his reputation as a broodmare sire, the 37 stakes winners already out of his daughters including a leading candidate for his Classic mantle in Tiz The Law (Constitution).

One way or another, there's a legacy here worth preserving. Because Tiznow, in both build and background, reminds us always to resist lazy assumptions.

The skittish domestic market of today didn't give much of a chance to another Cal-bred, California Chrome, before exporting him to Japan. His Breeders' Cup duel with Arrogate was right up there with those won by Tiznow, and I'll never tire of remarking that his conqueror's sire Unbridled's Song was out of a three-parts sister to the dam of his own father, Lucky Pulpit. Yet one was deemed commercially impossible, and the other a bona fide Classic influence.

Much like Ride the Rails and Indian Charlie, respectively sires of Candy Ride (Arg) and Uncle Mo, Cee's Tizzy gave us all a rebuke along with his greatest gift. No less than with mares like Leslie's Lady (Tricky Creek), we can't just declare “exceptions to the rule.” We can't pick and choose when pedigrees are relevant. If anything, we should always be more interested in the ones that are hardest to explain.