Home » Archive » Shared News » This Side Up: Something Missing in the Modern Derby

This Side Up: Something Missing in the Modern Derby 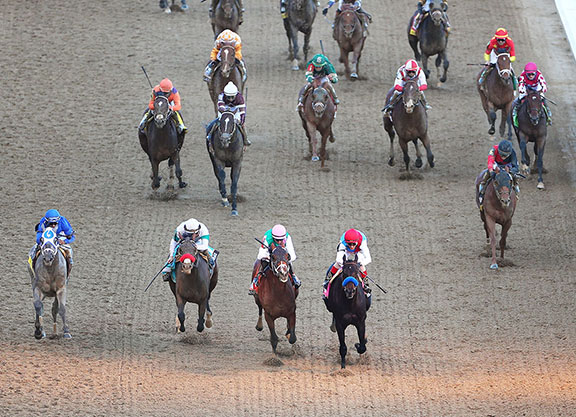 The fastest two minutes in sport? Maybe. Only sometimes, these days, it feels as though time is standing still.

Last Saturday we had yet another GI Kentucky Derby where the protagonists had already volunteered themselves before the clubhouse turn. For the moment, speed seems to have a lock on the race. You have to go back to Orb for a closer; and beyond, for the flamboyant pounces of Calvin Borel.

This time round, the first four were all in the first six at the first bend. At the quarter-pole, they were already in their finishing positions. Was this a horse race, or a procession?

The paradox is that while everyone wants to be pressing the pace in the modern Derby, that doesn't seem to involve going especially fast. Once you get your position, it seems you don't have to apply perilous levels of energy to hold it.

The most obvious explanation is the starting points system: sprinters are no longer contributing to the pace because they can't earn a gate in two-turn trials. If that's the case, we need to be very careful about what we're doing to the defining examination of the American Thoroughbred. Because we may find ourselves hammering our genetic gold into stallion ingots in too cool a forge.

Obviously a 20-runner stampede round two turns is a pretty brutal test, by the standards of American racing, and possibly jockeys are now exploiting the dilution of the pace. They feel it's imperative to get a position, to avoid the traffic; but they would get a nosebleed even thinking about Angel Cordero's fractions on Spend A Buck in 1985.

To be fair, a fast surface and the indefatigable speed we associate with Bob Baffert has now produced consecutive times more in keeping with the old days than the three preceding years, where you could have used a sundial rather than a stopwatch to clock them on or around 2:04.

Spend A Buck missed two minutes by a fifth after blazing 1:09.6 and 1:34.8. If that was a historic achievement–putting him behind only Secretariat, Monarchos and Northern Dancer–then the fact remains that only Baffert's lionhearted Bodemeister (Empire Maker) in 2012 has recently posted terror fractions. Take him out, and the other 14 Derby fields to clip :46 for the half did so between 1962 and 2005; while the other eight to go a mile under 1:35.5 did so between 1952 and 2001.

But you can't blame the driver for the engine, so perhaps there's another dimension to all this. Perhaps we need to ask whether breeders are limiting the available horsepower?

The whole point of the Derby, as the ultimate measure of the maturing dirt Thoroughbred, is to find an optimal equilibrium between speed and stamina. We talk about “carrying” speed and, in this unique race, that should imply a really punishing burden.

It's precisely for that reason, indeed, that I am always complaining about the myopia of contemporary European breeders in largely neglecting dirt stallions. Combing speed and stamina is the grail at Epsom no less than Churchill Downs, and those Europeans who claim to be helpless against the Galileo (Ire) dynasty should duly come to the Bluegrass for a solution. After all, I could be wrong, but I always understood Galileo to be the grandson of a horse that won the Kentucky Derby in two minutes flat. As it is, commercial breeders in Europe succumb to a childish dread of stamina and instead pollute the gene pool by mass support of precocious sprint sires without the slightest pretension to Classic quality.

But this is a two-way street. If the trademark of a dirt horse is the ability to carry speed, then what do we most admire in a top-class European grass horse? Well, it's a different brand of speed: that push-button acceleration, that turn of foot. Not Frankel (GB), funnily enough: I always said he really ran like a dirt horse. But most of those European champions imported by the great Kentucky farms, to seed the modern American Thoroughbred, were classical turf dashers: Blenheim II (GB), Sir Galahad III (Fr), Nasrullah (Ire), Ribot (GB), Sea-Bird (Fr), Caro (Ire).

And it appears that the European breeder does not have a monopoly on parochialism. Standing a turf horse in Kentucky is becoming close to impossible, commercially, whether indigenous or imported. If many American breeders nowadays reckon their families can do without the kind of “toe” that distinguished, say, Karakontie (Jpn) or Flintshire (GB), then I guess we had better get used to a deficiency of class in the Kentucky Derby closers–and settle for “speed” horses that don't actually run terribly fast.

We need to strive for the best of both worlds. As it is, the benchmark Classics on both sides of the ocean have lately obtained a ceremonial quality: a virtually private contest at Epsom, to establish which of the top half dozen colts at Ballydoyle has most stamina, and a peloton of sharp breakers at Churchill whose pursuers lack the flamboyance to run them down.

Two footnotes on the last closer to win the Derby. First, his finish was set up by Palace Malice (Curlin), forced into a white-hot tempo he could not maintain (:22.57, :45.33, 1:09.8). Second, Orb is by a son of a top-class French filly. Her own dam, also a Group 1 scorer, was by French Classic winner Green Dancer-whose own sire, Nijinsky, bears historic witness to the transferability of speed-carrying dirt genes to the European environment.

But we are where we are. And, that being so, let's hear it for Baffert. Forget bloodlines, here is a genius who is single-handedly impacting the breed–not least, in this context, by loading Quarter Horse speed into his works. If he seldom bothers with turf pedigrees, then at least he's maximizing class and dynamism in the modern dirt horse.

There seems to be some kind of nebulous mainstream agenda against Baffert, who has just saddled the first Derby winner with no raceday medication since 1996. But our own community has been too ungenerous to one of the greatest achievers in the sport's long history. Since 2000, Baffert has been recognized by one Eclipse Award as Outstanding Trainer. One! That was in 2015, when he had just ended our 37-year wait for a Triple Crown winner.

He's a confident guy and doesn't need to be told how good he is. (Actually I sometimes wonder if something of that rubs off on his horses, too). All the same, he's only human and absolutely entitled to feel affronted by this. With zero disrespect to the fine practitioners honored in the meantime, it's preposterous to suggest that Baffert has been professionally outperformed in 20 of the past 21 years.

By the same token, the greatest achiever of his generation has given everyone hope, wherever they are starting out. And that deserves gratitude from us all.