Home » Archive » Shared News » This Side Up: No Points for Freshness

This Side Up: No Points for Freshness 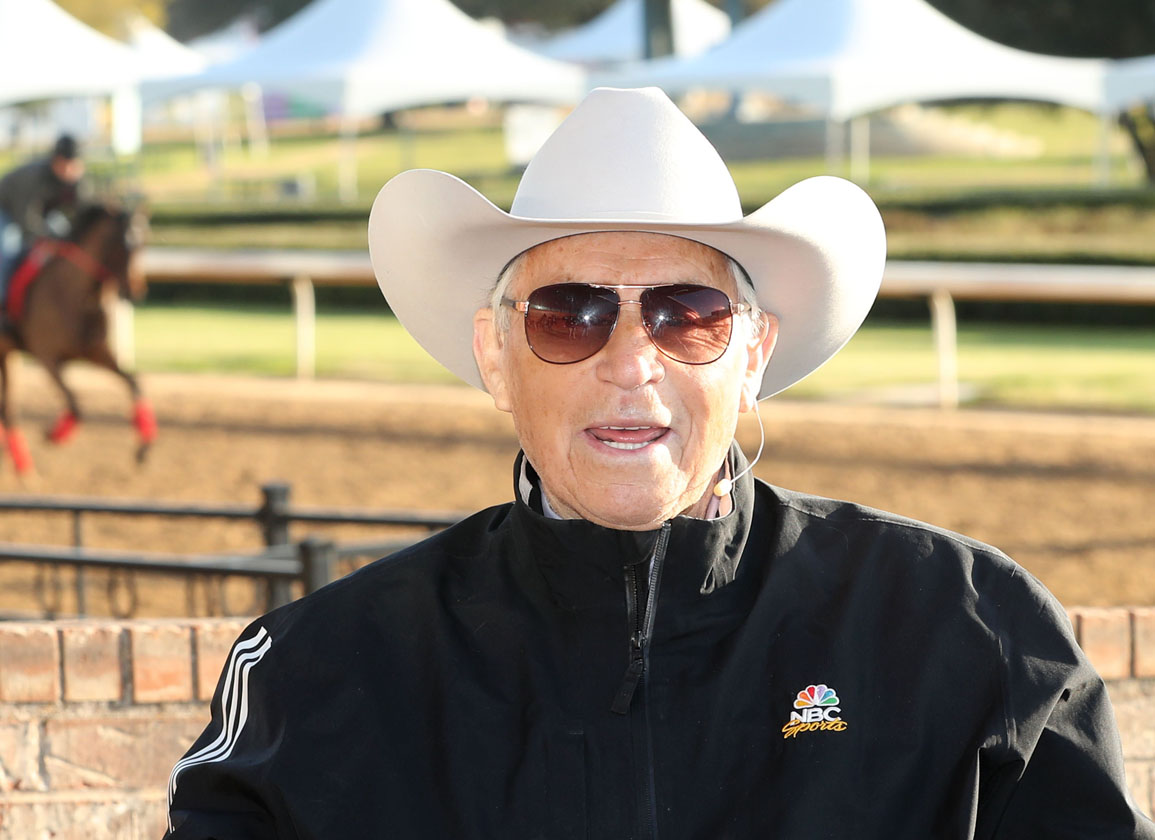 There was a time when you would load as much experience and conditioning as possible into a Kentucky Derby horse, as a mere adolescent required to jostle with 19 others through 10 furlongs. Nowadays, however, trainers are trying to reach Churchill Downs across a highwire stretched to a thread by two diametrically opposed imperatives. One is their conviction, whether through perception or presumption, that the typical, commercial-bred Thoroughbred of today can only stand up to a much lighter schedule. The other is to secure enough gate points in the trials.

In trying to reconcile this paradox, many horses reach this stage of the game with zero margin for error. For these the next two Saturdays, with six races carrying 170 starting points apiece, will be make-or-break. If you land a wide draw, or a rough trip, or an off track–well, tough. In some cases, to be fair, setbacks along the way will have left trainers no choice. But others have painted themselves into a corner by a witting trade-off between the benefits they perceive in conserving the gas, and the risk of the strategy backfiring.

What sets Bob Baffert apart, as the master of the modern Derby preparation, is his ability to fast-track even a horse as late onto the scene as Justify (Scat Daddy). It doesn't seem to matter that a lot of those Californian trials are too mildly contested to yield much in the way of useful experience. Somehow, whether by accident or design, his methods have proved ideally tailored to the changing demands of the race. Okay, so maybe even he could only hit with a winner as goofy as Authentic (Into Mischief) was in the GIII Sham S. because the Derby, that year, was delayed until September. Time after time, however, Baffert manages to drill raw horses to all the professionalism required to take control on the first Saturday in May.

(To listen to this story as a podcast, click the arrow below.)

Now I realize that his regime is a demanding one. But if you don't like those Quarter Horse works, hard and fast, then how else do you propose getting a horse ready for the Louisville street fight after barely five minutes of competition? (Some or even most of which, moreover, will have been confined to maiden company.)

As I'm always complaining, carrying your speed in the Derby is nothing like as exacting, now that the sprinters have been excluded by the starting points system. This has surely assisted Baffert, whose horses so often just run the finish out of their pursuers. But it's not as though the race is now some kind of picnic.

The trials have always been a means to an end. They were dress rehearsals, a way of ensuring that the actors knew their lines blindfolded and had their timing tight. But the contradictory aspirations of many trainers today are muddling those ends and means. Their actors rehearse lying in the bath, mumbling to themselves from a soggy script. Trainers used to build up physical and mental fitness until their horses were ready to break down the door. Now they try to wedge it open just enough for horses to slip through with minimal effort.

Needless to say, there are a lot of outstanding horsemen out there applying themselves to the conundrum. It looks no coincidence, for instance, that the GII Louisiana Derby proved the deepest trial last year, having been extended to a mile and 3/16ths. That has created a useful compromise: the timing serves the conservatism of trainers, with 14 extra days of freshening relative to those running at Aqueduct, Keeneland and Santa Anita next week; while the distance, at the same time, gives the horses something valid to recover from.

Certainly those supervising Epicenter (Not This Time) have actually used his preps as just that: as preparation. They haven't viewed them merely as a way of securing a big day out, but as a tool for maximizing his chance of actually getting that blanket of roses. Admittedly they have hardly explored his versatility, in terms of surface, albeit he broke his maiden on the one that stages the Derby. But he has been learning about his vocation all winter, notably from a speed ambush in the GIII Lecomte S., and was able to make a slick adjustment to a different running style last Saturday.

This year, of course, the Baffert horses have themselves been left without wriggle-room in terms of starting points, having been ineligible to bank any before their recent move to other barns. As a former assistant who shared his transition from Quarter Horses, however, Tim Yakteen has worked his new recruits in seamless fashion, sending Doppelganger (Into Mischief) into the GI Arkansas Derby with five furlongs in a minute flat, to follow six furlongs in 1:10.8 the previous week. 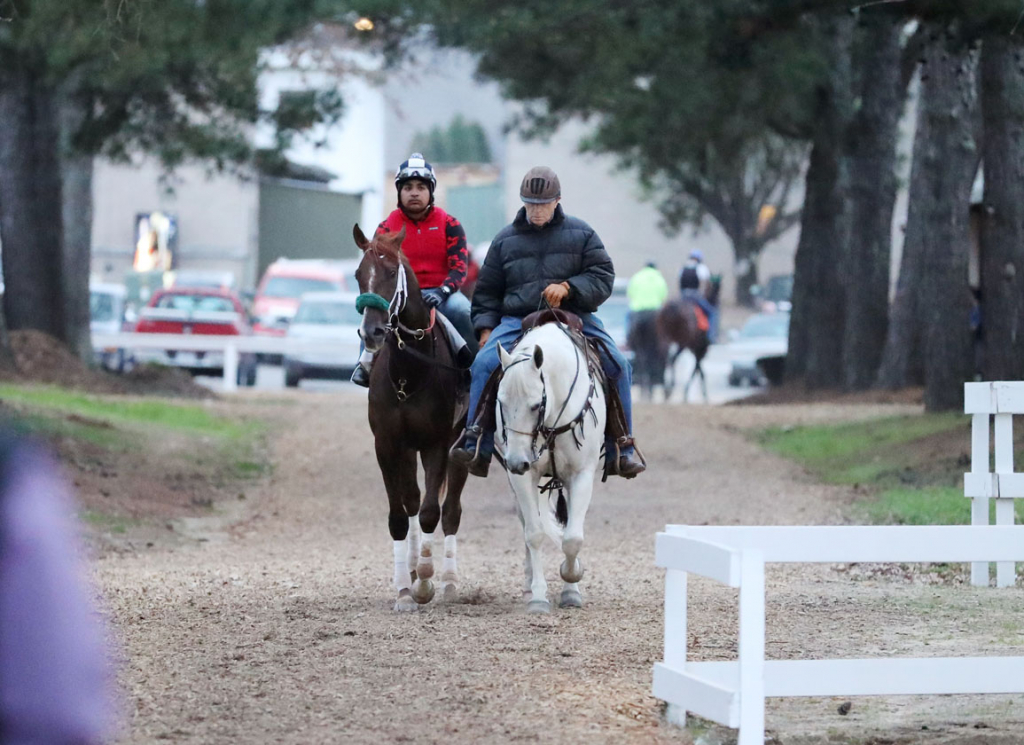 Lukas alongside his latest star filly this week | Coady

As it happens, the ultimate pioneer from the Quarter Horse world also has this single shot to get to the Kentucky Derby, though again the circumstances are highly unusual. As we've remarked before, a bold experiment with the filly Secret Oath (Arrogate) could yet redeem our whole community, single-handed, from an apparently endless streak of hideous headlines. If she can proceed to the Derby as one of the favorites, it will scarcely matter whether or not she can actually win, so long as D. Wayne Lukas gets a platform to intrigue, win round and ultimately inspire outsiders in the days before the race. But if she can excel, then perhaps the old master may have some timely lessons for his timid juniors within the business, as well.

The principal purpose of these proving grounds, remember, is to ensure that the next generation of breeders can work with properly tested genes. Charismatic (Summer Squall)–the fourth but perhaps not the last of Lukas's Derby winners–learned on the job to the extent that he took six attempts to break his maiden at two, and his Derby trail then comprised starts on Dec. 27, Jan. 16, Jan. 31, Feb. 11, Feb. 19, Mar. 6, Apr. 3 and Apr. 18. This was 1999, not 1949, and how blessed we all are that the Coach is still here to show the kids how it can be done.

We all marveled at Hot Rod Charlie (Oxbow)'s latest reiteration of his toughness and courage in Dubai last weekend. Nobody could call his sire a commercial hit. But who was it that showed us that Oxbow, one of the few good horses he has been sent in recent years, could soak up 13 starts inside 12 months? Who was it who reminded everyone that you're still allowed to run in all three legs of the Triple Crown, and run 6-1-2, even if you don't win the first?

Good luck to you, then, Mr. Lukas–because with this filly, your luck is everybody's luck.