Home » Archive » Shared News » This Side Up: Inside-Out Classic Has Redemptive Potential

This Side Up: Inside-Out Classic Has Redemptive Potential 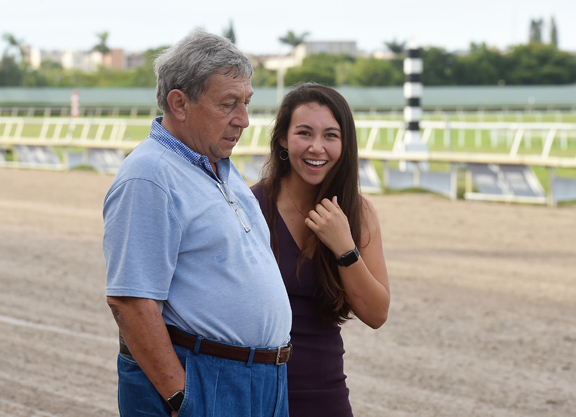 The last shall be first; and the longest, shortest. Insofar, that is, as we have a Triple Crown series at all. This year, to many, the

GI Belmont S. is just another mile-and-eighth GI Kentucky Derby prep, conveniently loaded with qualifying points. For those deigning to line up, however, an asterisk is a perfectly acceptable price for becoming a 152nd consecutive name in the annals of the oldest Classic, extending all the way back to Ruthless at Jerome Park.

The modern ruthless can perhaps be found at Churchill Downs instead–albeit we still don’t know if they will be able to bank the gate money that appeared, rather transparently, to drive their contemptuous treatment of those tracks that host the other Classics, not to mention historic prizes like the GI Runhappy Travers S.

The unilateral postponement to September of the Kentucky Derby represented one of our sport’s very first responses to the pandemic. A sudden, shared crisis called for far-sighted leadership, collective strategy and a spirit of sacrifice. As it was, we saw an immediate fragmentation by vested interests.

Whatever the merit of the resulting schedule, the 2020 Derby will clearly be tailored to Thoroughbreds at a different stage of their development. And already both the sophomores who were ready to win a Grade I over 10 furlongs on May 2 are out of the picture.

But the misfortunes that derailed Charlatan (Speightstown) and Nadal (Blame) can afflict any Thoroughbred, any time. Maxfield (Street Sense), after all, was only ever able to approach the Derby through the back door-and now he, too, is off the trail. Some things never change, and the few immutabilities of these confusing times are not always comforting.

Connections of Maxfield, of course, had already renounced the Belmont in favor of the GII Blue Grass S. That was perfectly defensible, in serving the interests of a specific horse. But all these defections, taken together, rob us of a solace we desperately needed in this horrible year.

That said, we still have the redemptive prospect of an East-West showdown between Honor A.P. (Honor Code) in California, and whoever picks up the gauntlet in New York Saturday.

And there’s a word–“redemptive”–we may hear a great deal should Sole Volante (Karakontie {Jpn}) emerge as best in the East. Now I realize that many people will never even give Patrick Biancone a hearing, in protesting his innocence of charges past. Without remotely entertaining his side of the story, they would cheerfully have “thrown away the key” when it came to his return. It takes some courage, indeed, even to enunciate one of the principles that defines a just society: guilty or not, he is entitled to start over after duly serving the punishment ordained for his (perceived/denied) offenses.

Perhaps, then, his only viable redemption–given that some will never be reconciled to his rehabilitation, whatever he does–would be to succeed afresh by methods that he knows, in his own heart, to be whiter than white. If he can never win round everybody else, all Biancone can realistically do is look himself in the mirror knowing that he has relied scrupulously and solely on his flair as a horseman (which it would be churlish to deny) while lacking the kind of patronage he previously enjoyed. For instance, in winning a Classic with a $20,000 gelding.

Human dignity is too precious, and too precarious, to be denied by mere presumption. To see Biancone reassemble his self-respect, somehow sieving out two of the best sophomores of their crop (the other being Ete Indien {Summer Front}, spectacular winner of the GII Fasig-Tipton Fountain of Youth S.), should at least intrigue any truly humane observer.

Our presumptions, remember, are based on the herd–and anyone can see that Biancone is an uncommon creature. Just consider the way he has brought out these two turf-bred horses.     Who else, nowadays, would have prepared Sole Volante (alongside Ete Indien) with a $55,000 allowance prize 10 days ago? And who else would have sufficient courage of their convictions to recognize in Luca Panici, a 46-year-old who has previously ridden a single graded stakes winner, a horsemanship and character equal to this opportunity?

A single turn won’t play to the strengths of Panici’s mount, especially if Belmont is feeding the speed. He will surely risk traffic on the inside sooner than get stuck wide rounding that endless sweep out of the back stretch, especially out of gate two.

With luck, there should be enough pace for a gap to open as they tire up front. The rails draw hands the initiative to Tap It to Win (Tapit) after he burned off a talented pursuer here last time; while Fore Left (Twirling Candy) forged his Dubai success from the front, and likewise a stakes win last summer on his only previous Belmont start. Between them, perhaps they can generate enough heat to ignite Sole Volante’s acceleration.

Whether he can get going in time to outfinish Tiz The Law (Constitution) remains to be seen. That horse sets the clear standard, with a Grade I already to his name round here plus a congenial stalking set-up. So long as Sole Volante again finishes with gusto, however, he can at least keep himself in the Derby picture.

Of the less seasoned types, Max Player (Honor Code) offers his sire a coast-to-coast foothold for superstardom; Pneumatic (Uncle Mo) fared creditably enough against Maxfield, having looked special in his maiden; while Dr Post (Quality Road) has already shown fight of a sort he might have borrowed from his purchaser, the late Jimmy Crupi.

Now there was a guy who showed, with all the disadvantages he was dealt, that you can start at the back of the line and still, with enough industry and wit, work your way to the front. Anticipating the likely run of the race, however, this time it may turn out to be Sole Volante who decrees that the last shall be first.