Home » Archive » Shared News » This Side Up: Hoping for a Weekend of Rejuvenation

This Side Up: Hoping for a Weekend of Rejuvenation 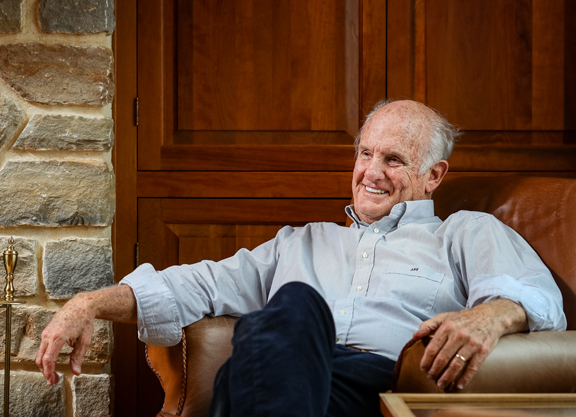 Our community couldn't have started the most momentous week of its calendar more auspiciously than by absorbing the wit and wisdom–or a sample, at least, of those infinite resources–of Arthur B. Hancock, III of Stone Farm, most deserving Honor Guest at the Thoroughbred Club of America's 89th Testimonial Dinner Monday. But I suspect that we'll need to heed his example and counsel rather more closely, over the coming years, if we are still to invite the world beyond our parish to judge us by the showcase we present the first weekend of every May.

Over the past three years, we have had two GI Kentucky Derby winners thrown out in what proved only the prelude to epic embarrassment for the sport. The horses themselves, ever hapless in our hands, invite our sympathy. One has been tainted, not by his transgression on the day, but only by association, his trainer having subsequently been menaced with disgrace; and the other, punished for one in a sequence of marginal but vexing misdemeanors at his barn, has meanwhile made a tragic exit. But whatever the spectrum of guilt and innocence, we all know to expect detail, perspective and fairness to be reliably inundated by the flood of gleefully scandalized mainstream coverage.

In between, remember, we also had the host track renouncing the sense of the greater good that animated those tracks persevering with barely less historic races, at their appointed time, behind closed doors. It's neither here nor there that this option would ultimately have been unavailable at Churchill. They had shown their hand, and have meanwhile obeyed the same ruthless priorities in cashing in one of the jewels of the sport in Chicago.

Hancock himself has long been a voice crying in the wilderness–like most prophets, often ignored, sometimes downright resented–urging radical collective engagement against corrosive greed. But we have now reached the stage where everyone must surely recognize the dangers both to the Thoroughbred itself and also to the social feasibility of the industry it sustains.

One of the axioms Hancock harvested from a lifetime among great horsemen was one favored by John Nerud: “In this game, you have to position yourself for luck to run over you.” That's about leaving nothing to chance, within our own competence, precisely because we owe almost everything else to hazard. Yet it also applies, far more broadly, to our prospects of preserving our way of life. Because we can't just shrug our shoulders, over the travails of recent years, merely as bad luck. Yes, there have been episodes of sheer misfortune. But we have also, through inattention or neglect, sometimes left ourselves exposed; have sometimes, in effect, gone out there asking for trouble.

That's why we have to apply more scrupulous and exacting standards across the board: because we know, in the nature of this business, that every now and then we are going to get run over by a gigantic, runaway truck of bad luck. We must position ourselves at least to roll into the ditch for such disasters as are avoidable–something they have commendably managed, for instance, at Santa Anita.

After listening to some better placed to know, I do understand that certain aspirations for more purposeful regulation might come at too perilous a price–whether literally so, in terms of the viability of the sport, especially at smaller circuits, or by the testing magnet picking up innocent shards and filings along with the butcher's hooks of the real villains. Let's hope the enforcement agency appointed this week will prove sensitive to some of these practicalities. It would be a pity if we ended up only making things worse by trying to do the right thing.

As the song says, there is much “room for doubt” about the notion that Luck might be a Lady. So, after some of her recent conduct with regard to our sport, let's hope she keeps the party polite in Louisville over the next couple of days. It's not as though we haven't furnished her with helpful materials.

It's a while since we had so many people suspecting that Friday's Classic could produce a better 3-year-old than the one staged Saturday, but purely in terms of narrative potential the two races already complement each other nicely.

We have a couple of young stallions, for instance, in a position to sire the winner of both–something achieved during the last 100 years only by Bull Lea (1952) and Native Dancer (1966). Upstart's second crop at $10,000 has yielded one of the favorites in each field, in the 50th anniversary of Airdrie's foundation by Brereton C. Jones. (The farm also takes credit, incidentally, as breeder of Summer Is Tomorrow (Summer Front) in the Derby). Gun Runner's explosive debut crop meanwhile supplies a champion juvenile filly and two Derby colts, including a freak from California trying to rewrite all the training manuals on only his third start.

The family operation of Ashview Farm, incredibly, has bred one of the leading fancies in both races, in Nest (Curlin) and Mo Donegal (by Uncle Mo, who also has an outsider in the Oaks). But you don't win roses without thorns. The Lysters have since endured some appalling luck with the dams of both; and how, meanwhile, will these races be viewed at My Meadowview LLC, who culled both mares to Ashview? (Hopefully the vendors have at least retained other females from these families.)

And then there are the trainers with a chance of the double, above all D. Wayne Lukas himself–at 86, still a beacon of evangelism for what we do. It's an awfully long time now since Europeans like me, visiting the Breeders' Cup, were dismayed to discover Lukas apparently marooned on an upturned keel, reduced to a fraction of the numbers with which he had once transformed the American Turf. However condescending we became, he never shed a single strand of dignity.

An inept ride cost his brilliant filly a shot at the Derby, but Lady Luck might yet be in the business of levelling things out a little for the reputation of our sport in Main Street, having allowed Ethereal Road (Quality Road) to slip in the back door at the 11th hour. I still have a madcap case for this guy, as a type for exotics, and don't neglect the prospects of Crown Pride (Jpn) (Reach The Crown {Jpn}) becoming the latest to rebuke transatlantic breeders for their aversion to the Classic stamina and turf quality with which the Japanese have prepared the ground for the dominant Thoroughbred of the 21st Century.

The foundation stone, of course, had an apt provenance: Stone Farm. Crown Pride is by a grandson of Sunday Silence, and his granddam is by a son of the horse who saved Arthur Hancock from the abyss. And if Arthur believes in destiny, then so can I.

Perhaps, then, two other great old horsemen may be about to crown decades of distinction through foals delivered by two mares that would themselves, purely in their naming, share a certain resonance: Secret Oath (Arrogate) is out of Absinthe Minded (Quiet American); and Zandon is out of Memories Prevail (Creative Cause).

The British diplomat and politician Duff Cooper entitled his memoirs “Old Men Forget.” Well, some do, some don't. It seems largely to a matter of how Lady Luck might be feeling. But all of us, older every day but seldom any wiser, share a debt of inspiration to the generation of horsemen that includes the breeder of Zandon, the trainer of Secret Oath, and the man whose personal redemption nourished a revolution in Japanese breeding. With such exemplars, we have the ingredients not only for an unforgettable double; we also have a template for succeeding generations to go out there and make this sport something we can again show to the world with pride.