Home » Archive » Shared News » This Side Up: Honor Abides in Pegasus of Clipped Wings

This Side Up: Honor Abides in Pegasus of Clipped Wings 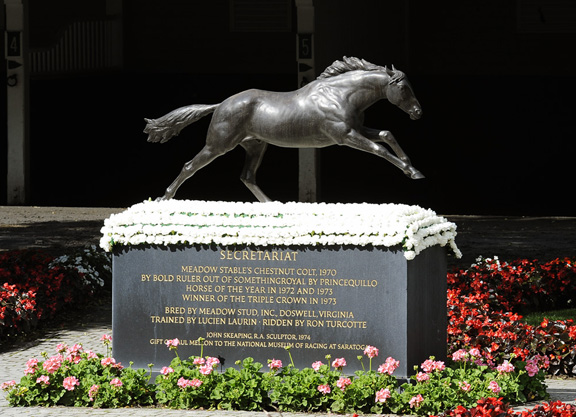 It's the obvious question in South Florida this week. Back in January 2017, everything was henceforth going to be different. The language was brash, it was immoderate, it certainly wasn't to the taste of traditionalists. But like it or not, it looked a game-changer. Yet here we all are, four years on, asking whether the whole project has failed; or whether, despite its apparent humiliation, it retains enough momentum never to permit a return to the old ways?

No, we're not talking about the latest senior citizen to retire to Palm Beach. True, Donald Trump has sufficient interest in the Turf to have introduced Secretariat to his very first public utterances when embarking, at just the same time, on a revolution of his own. “If Secretariat had come in second,” Trump remarked in his victory speech, “he would not have that big, beautiful bronze bust at the track at Belmont.” Let's leave unexplored the curious choice of the word “bust”. It was simply gratifying to see that Secretariat remained sufficiently in the cultural mainstream to convey Trump's idea of “superstardom.”

As it happens, he had already invoked Big Red on the campaign trail, in the course of a characteristic digression on his own pedigree. “They used to say Secretariat doesn't produce great horses,” he observed. “Actually Secretariat wasn't one of the best, if you want to know the truth.” The incensed reception of this remark was instructive of the automatic virulence of so much political discourse today. In context, he can only have been referencing Secretariat's failure to establish a sire line–presumably an Alabama rally had limited interest in his record as a broodmare sire–yet indignant opponents decided that Trump had pronounced him overrated as a racehorse. Which only went to show, depending on your vantage, either that his enemies would disparage him whatever he said; or what happens if you make a habit of mendacity and disrespect.

Anyway, the point is that Trump returns to civilian life in the same week that a parallel cycle appears to face a Florida crossroads of its own. Because it would be churlish to pretend that the GI Pegasus World Cup has achieved the radical transformation it promised four years ago. And the question now, even as a more traditional presidential style is restored, is whether the departure of Donald should coincide with the return of the Donn? 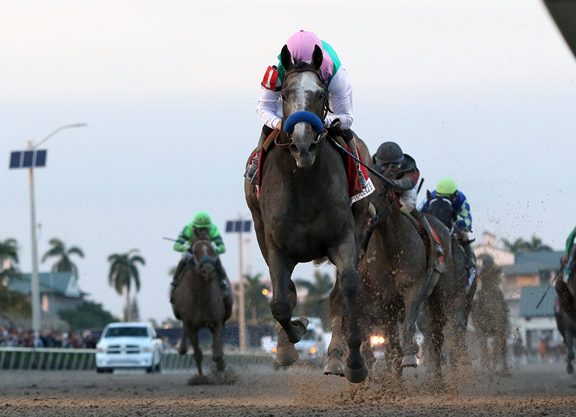 Its own prize fund slashed, and squeezed by one of nearly grotesque size in Riyadh, the Pegasus certainly appears to be in a precarious place. The inaugural running in 2017 offered a $12 million purse, subscribed at $1 million per starting gate, and duly lured Arrogate (Unbridled's Song) and California Chrome (Lucky Pulpit) to a rematch after their Breeders' Cup showdown. In 2018, the prize fund augmented to $16 million, the winners of 43 graded stakes were headed by Gun Runner (Candy Ride {Arg}), Stellar Wind (Curlin) and West Coast (Flatter). But the following year, with entry halved to $500,000 and the prize fund down to $7 million, the field began to lose depth even behind the stellar City of Light (Quality Road) and Accelerate (Lookin At Lucky), with an aggregate 26 graded stakes.

Last year, entry suddenly became free for invitees but the purse duly shrank to $3 million. And, on the day, only Seeking the Soul (Perfect Soul) and Higher Power (Medaglia d'Oro) could bring a solitary Grade I apiece. In fairness, the race lost its headline act only through a late injury to Omaha Beach (War Front). But Maximum Security (New Year's Day) was diverted to plunder the riches of the sands, just like Charlatan (Speightstown) this time round. If that still leaves three Grade I winners on Saturday, in Knicks Go (Paynter), Code of Honor (Noble Mission {GB}) and Math Wizard (Algorithms), this is not the race that had caused valuable stallion prospects to relay their retirement. The companion race on grass, meanwhile, is now down to $1 million from $7 million.

Yes, the hosts have retained a valid place for the Pegasus in our elite program. For a start, the purse still ranks very highly–not least now that it's a bet-to-nothing. More important, perhaps, is the one entry requirement that was introduced with the changed format last year. After all the industry's talk about raceday medication, participants in the Pegasus would be obliged to walk the walk.

So the race is still trying to light a way ahead. But its original path has implicitly been abandoned. It has evidently been perceived that even the wealthiest would become reluctant to buy a gate at so exorbitant a cost, at least for a horse only with an outside chance–and especially now that there was a magic carpet to ride into the desert. Any hopes of a media rights frenzy had faded and it began to feel as though stakes would be paid simply to make the richest horses richer.

Admittedly a similar model appears to have been more sustainably adapted by the Everest in Australia. Maybe that's partly because sprint races tend to be more of a crapshoot; but perhaps it's principally because there isn't a $20-million alternative for the same pool of horses four weeks later. 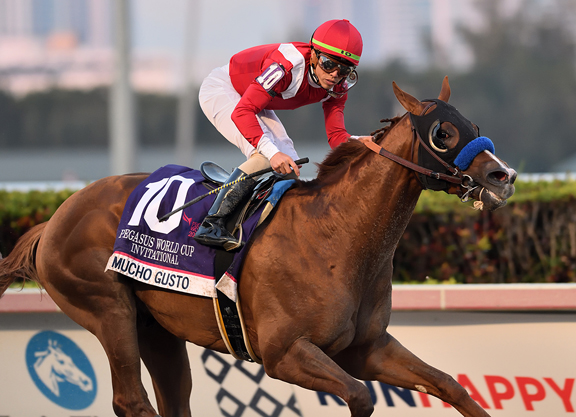 I must admit I have never been comfortable with any of these “super races”. Almost invariably they set out to challenge and dilute a calendar that has evolved, generation by generation, by testing what works best for a) the horse population and b) the racefans. They are casinos opened in the middle of nowhere. Nobody drove that way before but now, seeing those neon lights flashing gaudily in the empty night, people fill up the tank and make a special journey.

But Thoroughbreds don't refuel like motor cars. Putting on extra mileage to go flat out in January, February and March, whether in Florida or halfway round the world, is bound to cause wear and tear–and will duly cost depth and quality in historic prizes through the year.

Nor did fans really gain much even when the Pegasus was able to seduce newly minted champions into one more lap of honor, literally hours before disappearing to the rural Bluegrass. I'm sure many fans would have preferred investment in cherished old races that have lost some of their luster in recent years, like the Big Cap at Santa Anita–ironically, of course, one of the first “super races” when inaugurated as “the Hundred-Grander”–or the Gold Cup since its transfer there from Hollywood Park.

As it is, fans might look at this Pegasus field and think how nice it would be to have the Donn back. That race served its purpose beautifully over the years, advertising the hardiness and class required of any future stallion setting out on so arduous a domestic campaign. True, the gelded Forego, the infertile Cigar and the tragic Saint Liam could not recycle those assets; but those that did included Deputy Minister, Medaglia d'Oro, Quality Road and now Constitution, who won the penultimate running.

The Donn honored the family who presided over Gulfstream in its pomp, and now we must all wait and see quite what the Stronach legacy will ultimately prove to be. We may not do so very complacently, but who knows? Perhaps posterity will acknowledge most gratefully the welfare innovations introduced to the Pegasus. 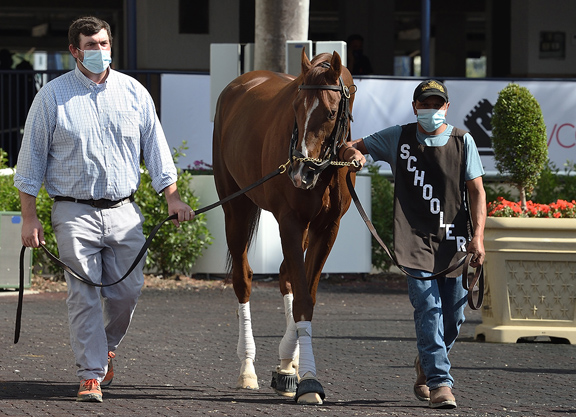 Code of Honor schooling ahead of the Pegasus this week | Coglianese

In the meantime, while we're taking the longer view, I'd certainly be gratified to see Code of Honor make everyone ask themselves afresh how they allowed his sire to slip through their grasp. A full brother to Frankel (GB) (Galileo {Ire}), exported to Japan! Both Noble Mission and Frankel carried their speed in a manner that was always going to adapt to dirt, given the chance, and sure enough Code of Honor emerged from his sire's first crop to claim second in the Derby.

Okay, he should have remained third according to the 45th President, who denounced the disqualification of Maximum Security as political correctness. But Code of Honor–typically of the chlorophyll allergy that has doomed his sire, a $70,000 RNA at Keeneland September–went on to win historic dirt prizes in the Travers and Jockey Club Gold Cup. Trying to turn him into a pure miler last year didn't really work, but he's the one horse in this field that has unfailingly kept the best of company throughout his career. He'd be an old-school winner that might help–not least by thriving on a raceday regime of hay, oats and water–to restore the bearings of a 21st Century pioneer that otherwise seems to be losing its way.

Because it's time we sought true grandeur, not grandiosity. Biggest doesn't always mean best, nor even does richest. And no President, any time soon, will be invoking that gargantuan statue of a mythical creature, looming over the Gulfstream parking lot, ahead of the modest one depicting a real Pegasus in the Belmont paddock.