This Side Up: Haskell Sets Derby Compass as East Meets West 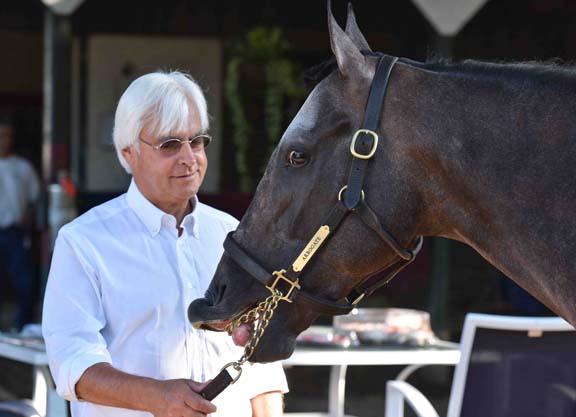 Guys. Come on. What was the one thing we were told, right from the outset? Wash your hands. Obsessively, wash your hands. Yet here's our most accomplished trainer, explaining that his assistant transferred a trace from a medicinal patch on his own back to the tongue-ties of their two most charismatic sophomores.

Somebody seems to have been no more vigilant in the jocks' room at Los Alamitos, creating a fresh headache for Bob Baffert in the postponement of a barn debut, scheduled for Del Mar this weekend, for Maximum Security (New Year's Day). This year Baffert has endured setbacks proportionate to his success, which is saying plenty, and it's unfortunate that the mainstream media has taken the opportunity to conflate those twin menaces to the reputation of our sport, injuries and drugs.

The more responsible coverage has at least kept in perspective the relatively innocuous contamination of Charlatan (Speightstown) and Gamine (Into Mischief). But some have been unable to resist the narrative combining this episode with the peculiar treatment of Justify (Scat Daddy), after his positive test on the way to a Triple Crown; the welfare traumas, last year, of Baffert's otherwise paradisal home track, Santa Anita; and the federal indictments this spring against trainers Jason Servis and Jorge Navarro, among others.

It was Servis, of course, who supervised the career of Maximum Security until that scandal broke–in a fashion that always seemed unorthodox, even before the lurid doubts introduced by his arrest. How long ago it seems, now, since that sultry evening when, after a prolonged delay for the heat wave, Maximum Security denied Baffert's Mucho Gusto (Mucho Macho Man) in the GI TVG.com Haskell. One way or another it has been a wild ride all the way through, for this horse, and this Del Mar fiasco will barely warrant a footnote in his biography.

Much like Maximum Security, I'm sure all of us must be sharing the same yearning: for what we now know to value as that most extraordinary of privileges, a regular day at the races. As it is, Mike Smith has been locked out of Saratoga (know the feeling, brother) by taking the mount on Authentic (Into Mischief) in a still more surreal Haskell this time round.

Smith will be hoping that the horse makes that a price worth paying, albeit the most obvious value of this race–in pitching together the respective runners-up from the GI Runhappy Santa Anita Derby and GI Belmont S. (presented by NYRA Bets)–is to integrate the form of the crop's standout colt on either coast.

In his own right, Authentic (what a name for a “Sham” winner!) is certainly at something of a crossroads. The way he goes about his task should settle the questions left open by his first defeat, where he broke a step slow; was kept fairly wide; and for the first time, never made the lead at any call. In view of his idle month, at the height of the lockdown, Authentic could yet prove that he wasn't simply revealing the kind of low fuel reserves we've seen in other brilliantly fast sons of his sire. Don't forget how green he looked in his first races, almost colliding with the rail even as he cruised clear on his stakes debut. He remains perfectly entitled to turn one small step back into two big steps forward.

Many of us, of course, are hoping that the single most pertinent factor in his defeat will simply turn out to have been the presence, in Honor A.P. (Honor Code), of the classiest colt of the crop. For now, Authentic's connections appear to be keeping the faith. That looks significant, as the Derby trail extends so much deeper into the calendar this year that his perseverance is already costing key opportunities round a single turn. (He's hardly going to be bounced out for the GI Allen Jerkens now.) With his future at Spendthrift in mind, however, maybe the idea is just to get his Grade I nailed in the Haskell, and then see how his world looks after that.

If this field lacks depth, it does set up a potential pincer movement on the favorite: the seasoned Ny Traffic (Cross Traffic) can be counted on to press pretty unsparingly, having seen off all bar the stellar Maxfield (Street Sense) last time, while progressive Dr Post (Quality Road) will punish any reckless competition up front by drawing on his stamina.

After all, one thing that won't change in a September Derby is the perennial equilibrium challenge between the speed horses and the closers. Will that be tilted one way or another, by more mature horses? You could argue that the speed will hold up better, driven by stronger horses. On the other hand, it could be that the speed in May tends to be a function of a more general precocity. Perhaps a 20-runner stampede through 10 furlongs will this time favor the traditional Belmont type. So Dr Post could yet enter the equation, even if he can't quite run down Authentic this time.

So, too, could Mystic Guide (Ghostzapper). Some people sound ready to give up on this guy after he could only manage third in the GIII Peter Pan S. Thursday, but only a very talented horse would have made that kind of dynamic move from where he was mid-race. Runner-up Caracaro (Uncle Mo), who was making his first start in six months and only his third overall, would also merit a rematch with Country Grammer (Tonalist) in the GI Runhappy Travers S. But then, if Country Grammer has really hit the Classic seam in what is a copper-bottomed Classic pedigree, nobody should presume the limits of his own progress.

Still plenty of delicious uncertainty, then, for all that we appear to have a standard-bearer on either coast. Just the last two weekends, after all, have volunteered legitimate new forces in Art Collector (Bernardini) and Uncle Chuck (Uncle Mo). Now we'll finally get the two coasts together, and find out whether one can maintain social distance from the other through the Monmouth stretch. If not, let's just hope that everyone has remembered to wash their hands.