Home » Archive » Shared News » This Side Up: Euros to Dollars

This Side Up: Euros to Dollars 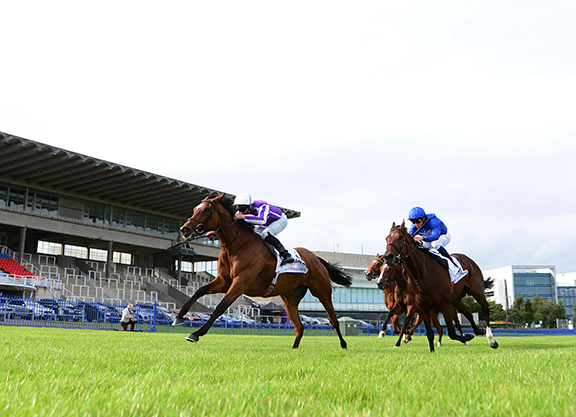 Magical is Chris McGrath's choice in the Turf | Racingfotos

Well, we know that such Europeans as have been able to make the trip–another lockdown began in England on Thursday–won't be in the slightest danger of catching anything on the dirt track.
If we can meanwhile break the shackles of the pandemic as well, maybe someone might feel sufficiently liberated finally to have another go next year. But at least the raiders should again be in the thick of things over on the grass. Now that the Breeders' Cup returns to Kentucky, moreover, they will be expecting an especially congenial environment, from the surface to the climate.
Certainly they had a chastening couple of days at Santa Anita last year, when only Iridessa (Ruler Of The World) in the GI Filly and Mare Turf rescued a whitewash. True, it had not looked a vintage group; but even their previous visit to Keeneland, in 2015, for a long time renewed what has sometimes felt like a perennial reproof against complacency. The way Hit It A Bomb (War Front) pulled the opener out of the fire set a misleading tone, with the home team then holding out until the very last grass race the following day.

The duel that restored European self-esteem that year was contested by Golden Horn (GB) (Cape Cross {Ire}), who had just won the Arc, and Found (Ire) (Galileo {GB}), who would win it the following year. So nobody should be under any illusions about the standards required, especially with the ongoing expansion of the American turf program.
That said, the Euros plainly know their metier and must be weighed by anyone handicapping the grass races. Here, then, are three that can run better than their likely odds. That is saying quite something, in the case of the first, but I think she should be closer to even money.

MAGICAL (Ire) (Galileo {Ire}) GI Longines BC Turf) 5-2
No mystery about Magical on tour: she showed her aptitude for the demands of this race when giving Enable (GB) (Nathaniel {Ire}) herself a scare at Churchill in 2018. But while the big discrepancy in transatlantic odds concerns Tarnawa (Ire) (Shamardal), who is challenging for favoritism in their homeland, my feeling is that even a respectful morning line understates Magical's prospects. She sets a formidable standard and I'd be pretty amazed if she were beaten.

While unable to win for a third year running on Qipco British Champions' Day, she only got going late behind two that exult in muddy conditions. She had previously exchanged verdicts with the top-class Ghaiyyath (Ire) (Dubawi {Ire}), again over 10 furlongs, and in terms of racing rhythm looks increasingly hungry for a return to this distance for only the third time in 15 starts since her run at Churchill. It can only help, moreover, that the scheduling of the Ascot fixture was this year slightly less parochial than usual, permitting her a third week to recover. Not that she particularly needs it: her battle with Enable in Louisville was her third start in three countries in 27 days.

In contrast Tarnawa (Ire) (Shamardal) arrives after a very light season, having only resumed in August. In that time she has plainly reached a new peak, without yet registering the kind of numbers routinely posted by Magical. While the latter's sophomore stablemate Mogul (Ire) (Galileo {Ire}) has now cracked that long-expected Group 1 success (3,400,000gns yearling; stable jockey's choice at Epsom), the fact is that the only runner to have touched Magical's regular level even once is Lord North (Ire) (Galileo {Ire}), whose solution to a poor run the other day is to try a new trip.
A demanding pace might conjure a surprising finish from German filly Donjah (Ger) (Teofilo {Ire}) at monster odds. Overall, however, Magical looks a very secure knot to keep those Pick Six lines under control.

CADILLAC (Ire) (Lope De Vega {Ire}) GI BC Juvenile Turf (presented by Coolmore America) 6-1
As his name suggests, this guy should get all the traction he needs on an American circuit. Because while even the bare form of two reverses in soft going would give him every chance here, Cadillac has been most impressive on both starts on sounder terrain.

On debut he burst no fewer than nine lengths clear of Ebeko (Ire) (Awtaad {Ire}), who has since done sufficiently well for new owners in California to follow him here for a rematch. Having won so easily, Cadillac was still green when turned over at odds-on next time, but the half-length winner went on to show his comfort in the softer ground that day when recently winning a Group 1 in similar conditions.

Restored to better conditions, Cadillac quickened clear of another subsequent Group 1 winner in Van Gogh (American Pharoah), and was well fancied when lining up for the premier juvenile prize in Europe, the G1 Darley Dewhurst S. Unfortunately the going was against him and, though he travelled smoothly through the race, he did not really pick up under pressure and was beaten a little over four lengths into fifth.

His nimble action and build together suggest that he will be well suited by the demands of this race, and he represents a trainer who has made an extraordinary impact since adapting her skills from jump racing to equal effect on the Flat.

Ballydoyle, predictably, has an aristocratic contender in Battleground (War Front), the first foal of Found, but as it stands his form has not worked out anything like as well as that of Cadillac.

LOPE Y FERNANDEZ (Ire) (Lope De Vega {Ire}) (GI Fanduel BC Mile presented by PDJF) 30-1
Okay, this is a bit of a wildcard. We were mad on the chance here of that remarkable mare, One Master (GB) (Fastnet Rock {Aus}), before her unfortunate scratching. And offering this creature in her stead depends on a bit of a crackpot theory. But the Mile is ever a crapshoot, and it might just be that Lope Y Fernandez can respond to a puzzle very different to those he has been trying to piece together all season.

He flashed big ability when coasting through the field to lead in the G1 Irish 2000 Guineas on his reappearance, but didn't see the race out. Worn down into third behind Siskin (First Defence), he has duly spent all his time since at shorter distances. He has run very well once or twice, notably when beaten under a length into third in the G1 Prix Maurice de Gheest, but there is a suspicion that straight tracks might not suit his style ideally. He might just be one of those that needs things to fall right: a waiting ride, through congestion, in the chaos of a turning mile.

Much his best efforts have come on a faster surface, but he showed enough life in two sprints on heavy ground to suggest that he remains in form this fall. He's got a great base of experience now, which you need here, and will benefit from plenty more of that in the saddle. It's a roll of the dice, for sure, but by the same token he would be an absolute blowout at the windows.
Siskin has not really built on that impressive display at the Curragh, and the other Classic winner in the field certainly looked unlucky not to finish in front of him when they crossed swords at Goodwood in the summer. Kameko (Kitten's Joy) also put in the better rehearsal of the pair, last time out, but his performance round Goodwood—one of Britain's sharpest tracks—sends mixed messages. He sure can travel, through a race, but couldn't get his jockey out of trouble and you'd be worried if they were to get trapped on the inside.

With Lope Y Fernandez, perversely enough, that might be just the scenario we're looking for. And the odds, in contrast, will make ample allowance for things not quite working out.