Home » Archive » Shared News » This Side Up: D-Day for Baffert's Coolmore Pair

This Side Up: D-Day for Baffert's Coolmore Pair 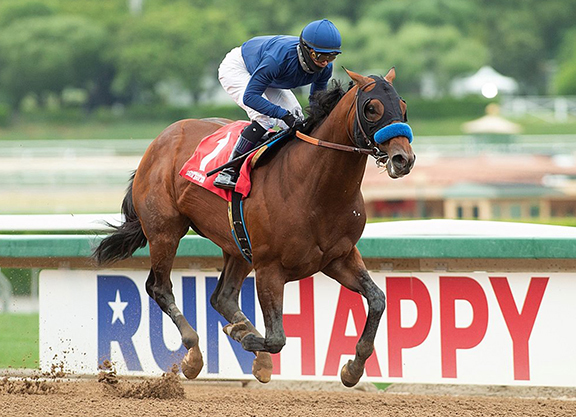 He's like the clean-cut, wide-eyed rookie sent into the lines, trying to read the expressions of the relieved troops. What might the likes of Charlatan (Speightstown) and Nadal (Blame) tell this star cadet, as they hand over the trenches, to steel him for the challenges ahead? Cezanne (Curlin) probably thinks they could do with a shave, and shouldn't be smoking on duty. But then he will notice the medals on their chests, and start to ask himself whether he too will step up; whether he will live up to everything his instructors thought they could see on the parade ground.

Charlatan and Nadal won early battles, of course, before being forced out of the GI Kentucky Derby trail, but their general Bob Baffert has already ordered reinforcements into the breach. Uncle Chuck (Uncle Mo) is evidently going after the East's leading colt next weekend, and meanwhile he deploys Cezanne against the premier sophomore on his home front.

Having previously professed faith in the calm genius of his trainer, we will defer for now what would otherwise seem the obvious concern about Honor A.P. (Honor Code): that he will be required to beat more horses in a single race, come Derby day, than he will have encountered in his whole life outside maiden company. Instead we'll focus not just on Cezanne, but on another Baffert sophomore who likewise weaves a fascinating sub-plot into an epic Saturday.

Cezanne and Eight Rings (Empire Maker) have very different profiles, to this point, but they do have one important thing in common. The critical tests they undertake, on either coast, will go a long way to determining the yield (or otherwise) on hefty investment made by John Magnier and various partners.

For Magnier, having brought consecutive Triple Crown winners to Ashford out of his barn, has shown his faith in the Baffert program by seeking its next champions at a rather earlier stage of their development.

Cezanne topped the Gulfstream Sale last year, at $3.65 million; and it's safe to assume that pretty giddy stakes were also required to complete a deal to stand Eight Rings, on his retirement, just days before he lined up for the GI TVG Breeders' Cup Juvenile. An Eclipse Award was plainly in the offing that day, but he blew what hindsight suggests to have been a golden opportunity and fared no better when resurfacing at Oaklawn in the spring.

Since returning to the worktab, however, Eight Rings has teased his ownership group–a formidable assembly, even before the advent of Coolmore–that he may yet turn things round. In his four latest breezes, he has clocked a quicker time than 209 of 212 other animals going the same distance. And it's not as though his reputation ever depended only on what he did in the mornings. Juveniles don't make all in Grade I races, roaring away by six lengths with the eventual class champion toiling in third, unless they have a ton of natural talent.

We know that Thoroughbreds are complicated creatures, seldom with a single lock taking a single key. But if Baffert has figured out where the real Eight Rings has been hiding, his latest comeback in the GI Allen Jerkens S., presented by Runhappy, could yet intrude on back-to-back weekends potentially showcasing sons of Violence–No Parole succeeding Volatile–as the fastest of their respective crops.

Cezanne, for his part, holds rather more appeal for romantics (whose instinct is naturally to root for the underdog) than tends to be the case with sale-toppers. Apart from anything else, we do occasionally need our beliefs regarding pedigree, conformation and so on to work out sufficiently for this business to be sustainable and, if Cezanne is to prove one of the poster boys, then that's a gratifying prospect for the many friends of the late J.J. Crupi.

Nobody cherished Crupi more than Vinnie Viola of St Elias Stables, who co-bred Cezanne and retained a stake after his sale. Not merely because he acquired Liam's Map (Unbridled's Song) through Crupi as a yearling, and also shared in the success of Always Dreaming (Bodemeister), but primarily because of an exceptional personal rapport.

On losing his friend, just weeks after the Fasig-Tipton sale, Viola's tribute was pitch-perfect. Anyone can achieve a superficial eloquence by sheer craft, by an intelligent sense for the weight or rhythm of words. But you can only introduce that authenticating, third dimension when you also talk from the heart, as Viola did then. Even as he grieved Crupi, he made him live again. For most of us, even everyday situations tend to leave us only groping towards what we wish to convey. But here was an occasion when the usual poverty of language was rendered equal to the richness of a human life. So while firmly committed to Honor A.P., I do wish Mr. Viola and his partners well with Cezanne in the Shared Belief S.

Besides, he is out of a Bernardini mare. It is only a few days since we celebrated this extraordinarily precocious broodmare sire, but already yet another of his daughters has since produced a Grade I winner in Paris Lights (Curlin). This year, of course, Bernardini also has a colt in play for the Derby–and the people behind Art Collector certainly command respect and affection, too, as we'll be reiterating in the days ahead.

In the meantime Cezanne can seek a chink in the Honor A.P. armour that seems likely to close up once he gets a chance to use that low, unrelenting stride over a longer distance. Whatever he may lack in seasoning, Honor A.P. at least seems sure to relish the stamina demands of the Churchill cavalry charge.

One way or another, it's a day when Coolmore's chips with Baffert are piled pretty high. Eight Rings was named for the Super Bowl accomplishments of football coach Bill Belichick, who was apparently also in mind (though I'm straying well beyond home ground here) in Bon Jovi's Bounce: 'I'll take the hit but not the fall' etc. Though some may have counted Eight Rings out, this is the day he could well come bouncing back again.

But it's a famous line from Belichick himself that comes to mind with Cezanne: “Talent sets the floor, character sets the ceiling.”

I don't know what they engraved on Crupi's tomb instead, but that would surely have met the case just as well.