Home » Archive » Shared News » This Side Up: A Super Lesson for Racing

This Side Up: A Super Lesson for Racing 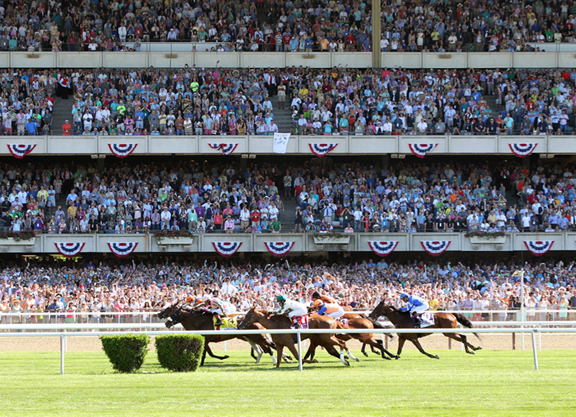 A pre-pandemic crowd at Belmont | Horsephotos

Sure, it's a very different game from our own. On the face of it, horse racing and soccer appear to have little more in common than the same generic umbrella as sports. But then it turns out that “soccer” is itself a very different game–or a very different industry, at least–from what the British know as “football.” And if you happen to have followed an extraordinary week for its European elite, then it would be remiss not to ask whether there might actually be one or two highly pertinent lessons for the Turf.

It's hard to convey to Americans quite how the launch and overnight collapse of the European Super League saturated not just the airwaves, but ordinary conversation wherever and however it can happen these days–from families round their kitchen tables, to friends shivering in pub gardens, to colleagues on Zoom calls. Pandemic, what pandemic? Hadn't you heard, the 12 richest clubs in Europe were going to start a breakaway franchise?

If you were taken aback by the uproar, then so were the owners of “the Dirty Dozen.” They knew to expect a furious, panicked reaction from UEFA and FIFA, whose tawdry supervision of the established set-up was doubtless assumed to have so alienated fans as to disable its defense. But they were clearly not expecting to see lifelong obsessives–whose tribal loyalty is so feverish that the Italian word tifosi traces to the word for typhus–burning replica shirts outside the stadiums to which they have been longing to return. In Britain the entire political spectrum, from government to opposition, united in immediately exploring a legislative response to challenge the viability of the project. Club legends, former players and managers, gave vociferous vent to their rage and disgust; and there were even some among those lucratively contracted to serve the present squads who had the moral courage to express alarm or distaste over their employers' plans.

The key to all this, and it turns out the key to fan engagement, was jeopardy. In principle, if you marshal adequate resources on and off the field, the present structure permits a team to play its way from the bottom of the pyramid to the apex. And, critically, you can also make the reverse journey. That makes business planning difficult, but also gives meaning to what happens when you send your players, hired at staggering expense on the back of fans' television subscriptions, over those white lines.

Three of the six English Premier League clubs who formed the core of the rebellion have American owners, long familiar with franchises where membership is secured. In European leagues, however, the system is meritocratic: underperform sufficiently, and you will be replaced by those who have earned promotion. Of course, the wealth of Manchester United or Liverpool makes their squads invulnerable to relegation; but only the top four league finishers qualify for the European Champions' League, the world's most glamorous and lucrative club competition. The Super League would have relieved them of this tiresome hurdle.

So this became a vivid public exercise in how capitalism functions. The fans stood up for the free market against cartels and rentier exploitation. Whether they now sit up and take notice of the equivalent processes in the global economy, similarly built on debt and megabrands buying out all competition, must be doubted. But for those of us who had bleakly assumed that the cynical agendas of globalisation were now inexorable, it was as edifying as it was astonishing to see how quickly the whole thing was unravelled by sheer grass-roots passion.

Yes, the 12 clubs and their fundraisers and analysts (take a bow, J.P. Morgan) made a valuable contribution in their scarcely credible ineptitude, and amply deserve the damage they have done to their own brands. But I do think their crass example has done our own world an inadvertent service. 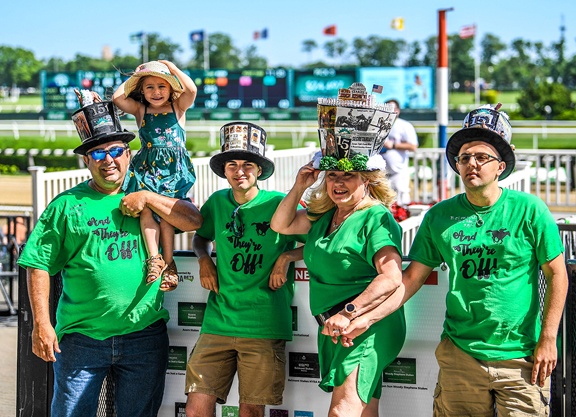 Because we have been reminded that we are nothing without the fans. And that the day we take their engagement and passion for granted is also the day when the lifeblood of our business begins to harden in the arteries of commercialism.

“Now, wait a minute,” you might say. “That's nuts. You can't compare us with these avaricious tycoons who can already rely on fans in Thailand to keep uncertainty within manageable bounds. All we have, all day every day, is jeopardy. We're just trying to squeeze some kind of living out of the most unpredictable investment vehicle in all sport. And everything we stake depends, if ultimately on luck, first and foremost on our own skill.”

There were 1,200 juveniles catalogued at OBS this week. Yes, each one represents a precarious, flesh-and-blood project. But that doesn't alter the fact that every crop is processed on an industrial scale, so that a horse making his track debut may have changed hands four times already: sometimes in utero, and very often pinhooked twice over: weanling to yearling to breeze show.

As result, we are candidly breeding for the sales ring rather than the track. As I've often said, that is ultimately the fault of those who direct the spending of the end-user: the agents and trainers complicit with mass breeding to new stallions, most of which will soon be standing somewhere like Peru or Oklahoma. If pinhookers knew that “racehorse” stallions would get due commercial recognition at ringside, then that's exactly where they would invest.

As it is, it's not just the breed that suffers when the commercial market recycles so much genetic junk every year. How can we expect affluent people to indulge themselves with a horse in training if we are flooding the market with mediocre stock with scarcely any premium on the things they would ideally want: a naturally sound, durable animal that will last the course, will keep giving you a day out, will keep finding in the stretch? Not, in other words, one whose job is done the moment the hammer comes down.

In fairness to the American breeder, many of these assets remain more commercial than in the home of soccer. Investors in the American Thoroughbred do still aspire, above anything else, to be involved at Churchill next Saturday; they just don't support enough of the proven stallions who would improve their chances of making it there. But here, too, it is often speed that drives spending–not least on bullet breezers at OBS this week. 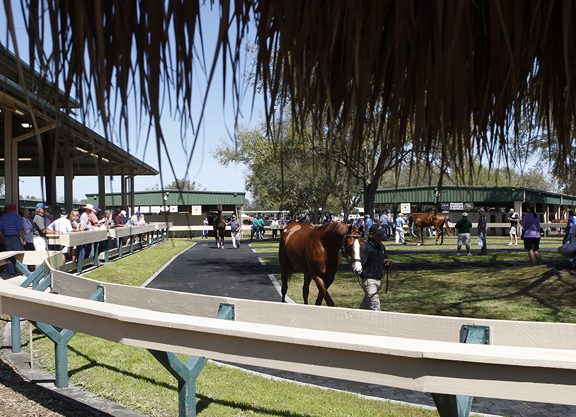 The OBS grounds | Photos by Z

Professionals in Ocala may have been too busy meanwhile to notice a staggering juvenile sale on the other side of the ocean. The Goffs UK Sale at Doncaster on Thursday bounced back from an excruciating spring for the sector last year to register record-breaking returns across the board. But this amazing boost to morale measured two things that are not easy to reconcile. On the one hand, this is actually an auction that prizes exactly the kind of ostensibly “commercial” precocity that is killing off those European stallions that have most to offer the breed in the long term, and racehorse owners here and now. At the same time, however, you couldn't ask for better evidence of the validity of the overall product. This amazing evidence of pent-up demand suggests that people who have survived the economic carnage of the pandemic can't wait to get back onto the racetrack and, blessed by a renewed sense that life is for living, it seems they don't even mind if the odds of reward are steeper than ever in Britain.

The type of horses we breed is just one dimension, of course. It just happens to be most relevant to our line of work. But there is much else for the sport to think about, in terms of its priorities. Because the bottom line is that owners are just fans with money. If we think about what works best for owners, we will also come up with something that will work for the fans. The success of micro-syndication confirms the personal stake of the ordinary fan in horses. Virtually all of us, after all, even if born on a horse farm, started out as fans: hooked by a particular horse or two, developing a remote but ardent bond. Maybe a Secretariat or a Kelso, but it could just as well have been some prolific old gelding who gained a cult following in claimers at your local leaky-roof.

If you're a pinhooker, you too need those fans. Apart from anything else, one of them will just have bought a pizza oven, or rented a cabin to sell a couple of used automobiles, and in 15 years' time will be wealthy enough to roll up at Saratoga or Book 1 at Keeneland.

But more fundamental are the $1 pickers of six, and the narratives that sustain their passion. That's the lesson of the European Super League. It's not a question of how fast is the fastest buck we can make, but how we keep those turnstiles clicking. That's our real bank vault, the true foundation of our sport. If we only remember that, then everything else will fall into place.

This story was posted in Shared News and tagged cautionary tale, Chris McGrath, OBS, racing fans, soccer, This Side Up.