Home » Archive » Shared News » This Side Up: A Channel of American Merit

This Side Up: A Channel of American Merit 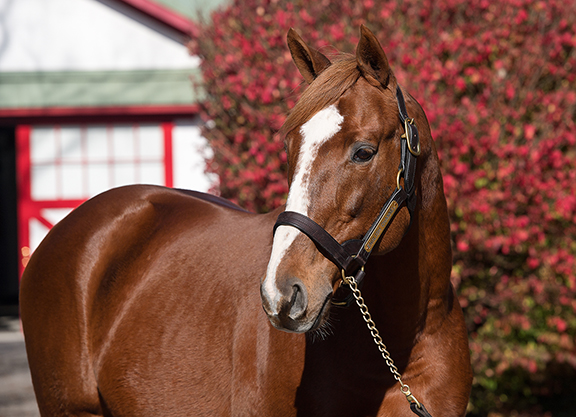 It doesn't make me mad anymore. Maybe it's just the idealism of youth ebbing away. But I have also begun to understand the virtue of markets. If people want to breed to unproven stallions, that's their prerogative. I can always buy a mare, send her to a sire of runners, and see y'all in the starting gate. If I'm right, the odds are in my favor; I get value from the market. And if I'm wrong, well, no need to be angry.

Even in setting all that aside, however, it's been hard to resist another source of annual dismay in compiling our midwinter survey of covering options in Kentucky. And that's the perennial gap between words and deeds when it comes to turf horses.

Everyone talks a good game these days about the expanding grass program in the U.S. They note the evolving role of synthetics, too, stressing the importance these surfaces may have in preserving our sport from the misapprehensions of welfare campaigners.

And then they go to a horse sale, and do their utmost to make it impossible to stand a turf stallion in Kentucky.

Now don't get me wrong. After all, I'm constantly berating European breeders for insularity regarding the kind of American dirt prowess that invigorated their gene pool when the founders of Coolmore tapped into Northern Dancer. I'm certain that the best way to break the same empire's Epsom hegemony, now, would be to repeat the trick and use American stallions that carried dirt speed through Classic distances.

But the other side of the coin is that American breeders also need more adventure. Regeneration should be reciprocal. We can't get enough Uncle Mo? Well, thank goodness Spendthrift shipped over Caro (Fr). Stroll through the Claiborne cemetery, equally, and ask yourself whether the iconic farm would have left the same imprint on the breed without importing Nasrullah (Caro's great-grandsire), Blenheim II, Sir Gallahad III and company. 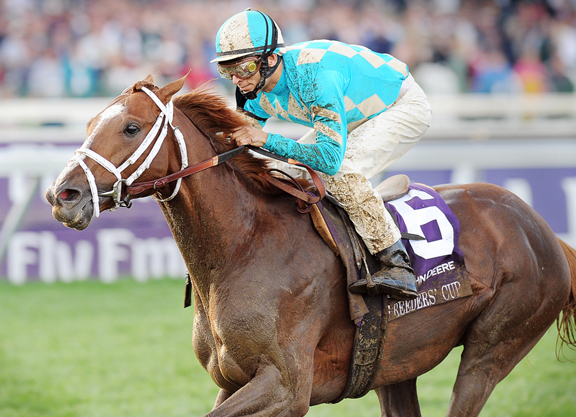 Yet it seems nearly impossible to get sustainable commercial respect for the few stallions making the same journey today; nor for the indigenous turf stallion who offers similar acceleration, stamina and durability.

Today, then, I would just like to celebrate a significant landmark in the career of English Channel.

Whatever else he may be, Calumet's 19-year-old son of Smart Strike is not a commercial stallion. Only 14 of his yearlings even bothered with the sales ring in 2020, of which a dozen sold for an average of $27,671. This placed him at No. 92 in the national table, and represented zero yield on a covering fee–$27,500 for 2021–that presumably expresses his value to end users instead.

Because these have long known him as a quiet achiever. If Ken Ramsey has been rightly incensed by a lack of commercial recognition for Kitten's Joy, whose stature as a turf sire has been measured by two general sires' championships, then chew on this: English Channel matches that Titan of their kind, stride for stride, in all indices. Working from half as many foals (757 across 10 crops, compared with 1,573 named foals across 12 for Kitten's Joy), English Channel has earned almost precisely the same per starter ($72,083 plays $72,773); and his percentages stack up almost eerily whether in black-type winners (7.1% for English Channel against 6.5%); black-type horses (11.5% against 11.7%); graded stakes winners (3.7% against 3.1%); graded stakes performers (6.3% against 6.1%); Grade I winners (1.2% against 0.9%); and Grade I horses (tied at 2.1%).

This comparison, to be clear, is intended only to exalt English Channel–and not to belittle Kitten's Joy, whose neglect by most elite European breeders I have repeatedly rebuked in these columns. But it is only right, given this parity of performance, to record that English Channel has just been crowned champion turf stallion by North American earnings (also by North American/European purses; ditto Northern Hemisphere) for the first time.

Until the posthumous championship of Giant's Causeway last year, courtesy of Bricks and Mortar, this title had been a six-year lock for Kitten's Joy. So let's give English Channel his day in the sun, and congratulate Calumet for their success–in this instance, at least!–in a conspicuous determination to stand up for their principles against the tide. 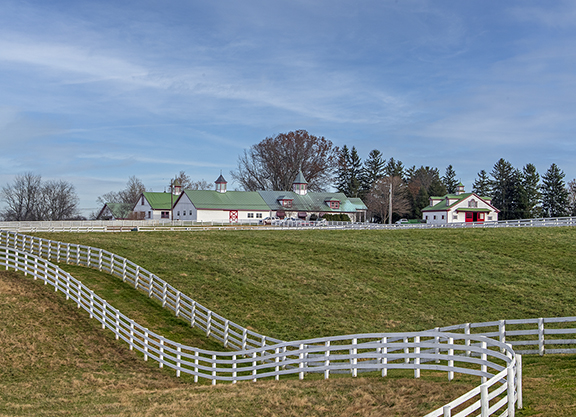 Under its present ownership this historic farm has assembled a stallion roster that verges, in commercial terms, on eccentricity. But it is unmistakably a repository for precisely those genetic assets most under threat in the American breed, and future generations may yet look back and decide that Calumet was ahead of its time. The twin foundations of the roster appear to be proper, deeply-rooted Classic pedigrees and/or robust constitution.

I asked Eddie Kane, its general manager, whether the soundness that is one of English Channel's calling cards makes him a suitable flagship for what Calumet is trying to do. “The team at Calumet hopes the industry's new focus against illegal medications and practices will further shift breeders from a short-term mentality towards a more economically sustainable focus on soundness and longevity,” he replied. “English Channel's trademarks are consistency, durability and longevity. In terms of racing value, he is constantly on or near the top.”

The obvious problem is that precisely those assets many of us consider most critical to the breed have somehow become the least commercial. How can the industry achieve a higher commercial premium for the kind of durability and stamina offered by English Channel?

“We wish we knew the answer to this one,” says Kane. “It seems many are content with the process of pushing 2- and early 3-year-olds, retiring them to stud, pumping up their first couple crops in the sales ring and then moving on. We attempt to support our stallions in the shed and stick with them. We think this benefits our breeders in the long run.”

Kane recognizes that other stud farms do this, too. But he finds it no easier to solve similar challenges about the undervaluing of grass horses. How do we get people to stop just talking the talk, and actually go to the sale ring and make it commercially viable breeding to turf stallions? 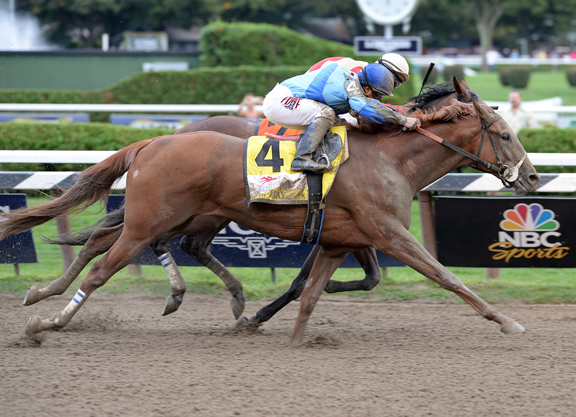 “Another very tough question,” he admits. “It is largely impacted by purses. NYRA's 3-year-old program was a positive move in that direction. The prestige in European racing lies with turf. Here it is dirt. Many prioritize the Derby, the Triple Crown, etc. If English Channel, with six Grade I wins and the race record of his offspring, was all dirt, he would command three to four times the stud fee. You can't say it's right or wrong: it is just the reality of our market, the economics and the perception of prestige associated with certain races and titles.”

Yet while everyone can see major and ongoing improvement in earning potential for turf horses in North America, that is simply not being reflected in the sales ring. Moreover, those big players who are targeting such opportunities are instead doing their shopping in Europe. And doing so successfully, for now. But they must be wary of importing a ticking time bomb from the European gene pool, which is increasingly divided between a Classic bloodline that's approaching saturation and upgraded cheap speed that will never sustain a Classic agenda.

Maybe they've been spending too much time with the English agent who so exasperated me when blithely announcing that he never goes to Keeneland because American breeders are obsessed with speed. If that gentleman were remotely competent to spend the funds of his wealthy patrons, he would understand that–for all the deficiencies of the American market–two-turn stallions here actually achieve far more “commercial” traction than do those of Classic profile in his domestic one. (I know, I know: getting mad again…)

The key, as I say, is that reciprocal transfusion. And if European breeders are nowadays too myopic to risk dirt blood, perhaps they should at least be a little more receptive to American turf stallions. They will certainly get value. David Redvers needed just $160,000 to buy a European champion by Kitten's Joy, Roaring Lion, at Keeneland September in 2016. Yet European breeders remained so obtuse that he was able to return to the same sale two years later and find Classic winner Kameko, by the same sire, for $90,000.

It was only in 2018 that Kitten's Joy was given a fresh start at Hill 'n' Dale, Ramsey having threatened to stand him in Europe if he didn't get more respect. And I reckon all concerned with the horse would cheerfully trade the turf crown lost to English Channel for the striking improvement in the averages achieved by his first yearlings bred under a new regime. In a market meanwhile buffeted by the pandemic, Kitten's Joy nonetheless advanced his 2020 yearling average to $139,505 from $86,367, elevating him from No. 33 to No. 17 in the table. (Remember these were also conceived at a more sporting fee, Hill 'n' Dale having immediately cut him to $60,000 from $100,000.)

That feels like a very wholesome development. The bigger picture, however, remains depressing. Flintshire (GB) (Dansili {GB}), for instance, has depended largely on support by his partnership to get started at the same farm. I am convinced that his first books will produce runners, but it looks like he won't be “commercial” any time soon.

As I said at the outset, however, neglect spells opportunity. And perhaps there might yet be Europeans far-sighted enough to try English Channel. As it happens, that was one of the aspirations mentioned by Kane, when asked how the horse could still round off his resume.

“Well, there are a few things actually,” he says. “As a Breeders' Cup Turf winner, one or more of his offspring repeating that accomplishment would be an important achievement. Also we feel a greater presence in European racing would be fruitful. And finally, we believe he is underrepresented on the dirt, as would be indicated by his sire Smart Strike, his [paternal] half-brother Curlin and offspring such as Travers winner V.E. Day, as well as the multiple graded stakes winner Optimizer who was the only 3-year-old of his crop to run in all three legs of the Triple Crown.” 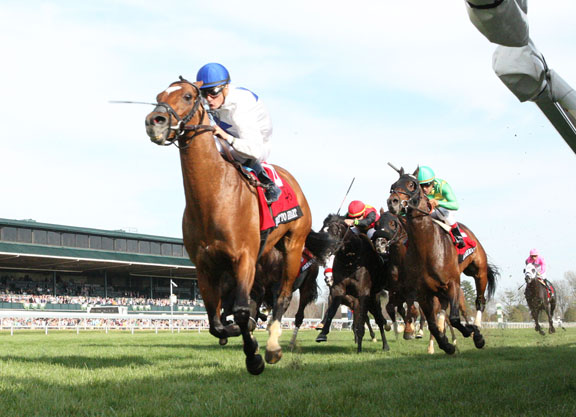 Heart to Heart winning Keeneland's Maker's 46 Mile, one of two GI wins for the son of English Channel in 2018 | Coady

That's another drum I'm always beating: the unsuspected versatility of horses whose reputation as specialists, because never stretched, becomes self-fulfilling. Take English Channel's son Heart to Heart, at Crestwood: don't tell me that 10 wire-to-wire stakes wins wouldn't parlay into dirt speed. As it is, he's a not a bad poster boy for his sire, with graded stakes wins five seasons running and 18 triple-digit Beyers. And his first two dams are by sons of Deputy Minister and, oh yes, Caro.

Few European breeders will even have heard of him. Nor would they necessarily think English Channel worth the journey if popping over the road from Blue Grass Airport to inspect him. But there's no pleasing some people: they will then complain that dirt stallions are all too big and square.

“Biggest is not necessarily best, if so we would grade them by weight and height,” Kane remarks. “We feel he has the ideal size with balance and athleticism. He crosses well with almost any mare.”

Kane notes that English Channel has a particularly good record with daughters of Kitten's Joy, with 14 winners from 16 starters including four at graded stakes level. That's fun to see, because they aren't just business rivals. They are also companions in arms; a mutual channel for the good stuff.