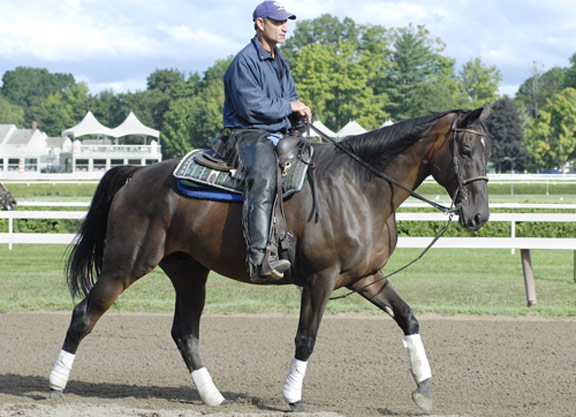 There would be no fairytale ending Thursday at Aqueduct for trainer Rick Schosberg. Silken Dollar (Central Banker), the last horse he will start before retiring from training, finished eighth in Thursday's fourth race at Aqueduct. That's OK. Schosberg, 61, learned a long time ago that the life of a horse trainer is never that easy.

“Obviously the game has changed with the emergence of unlimited stall allocations,” Schosberg said. “It's really affected the competitiveness of it. It used to be that every barn had a different outfit. Now there are trainers that take up five barns. That has really hurt the smaller trainer. It's hard to compete. I have nothing against Todd [Pletcher] or Chad [Brown]. They did nothing wrong and played by the rules. More power to them.

“There are a lot of reasons I'm doing this now and certainly the financial part of it was a factor.  It's hard to work seven days a week living in New York and taking home $55,000.That just covers the property taxes around here.”

But Schosberg is not complaining on his way out the door. Nor is he about to disappear. Schosberg will remain active on several fronts and will continue to spend much of his time working on horsemen's issues and advancing the cause of Thoroughbred aftercare. He is a vice president with the New York Thoroughbred Horsemen's Association and the president of two aftercare initiatives, Take 2 Second Career Thoroughbred Program and Take the Lead. He also sits on the board of the Thoroughbred Aftercare Alliance. He has been called the “conscious of the backstretch.”

“Something had to change,” he said. “We needed a system whereby the horsemen had an avenue that included a safety net for the horses. The industry has a responsibility to take care of these horses once they transition off the racetrack. Seventy-five percent of their lives comes after they are done racing. It's daunting task to be able to find facilities and organizations that are up to standard to make sure these horses are taken care of and rehabilitated for purposeful second careers. This work is very important to me.”

Schosberg will also continue to work with the Horse Racing Integrity and Safety Authority and is on that organization's horsemen's advisory committee. There's more: he will continue on as an owner and has some horses in partnership with Clear Stars Stable. He also sits on the board of Marx Realty, a Manhattan-based commercial real estate company that was started by his grandfather.

Schosberg, a Cornell graduate, worked for trainers Tom Skiffington, Sid Watters and Walter Kelley before going out on his own in 1988. He won 62 races in 1993, 63 in 2000 and will finish his career with 876 winners from 5,794 starters and earnings of $38,278,409. His best horse was Maria's Mon, the champion 2-year-old colt of 1995 and the winner of the GI Champagne S. and the GI Futurity S. He also campaigned Affirmed Success, whose career included wins in the GI Cigar Mile H., the GI Carter H. and the GI Vosburgh S. Schosberg won 25 graded races.

“I've had a wonderful career and have been lucky to have wonderful clients and owners,” he said.

With his stable including about 15 horses through much of this year, Schosberg has won 12 races in 2022. He won seven last year and six the year before. He will officially continue on as a trainer for the remainder of the calendar year, but does not have any horses entered for the rest of 2022. His horses will be dispersed, some going to trainer David Duggan and the rest to trainer David Donk.

For Schosberg, Thursday was like so many other days, thousands of them in fact. He got up early, worked, drove back and forth between Aqueduct and Belmont, ran a horse who didn't live up to her 5-1 odds and put in a 13-hour day. But now that's all done with.

“How did it feel? I don't think it has sunk in yet,” he said when asked about starting his last horse.

Come Sunday and the beginning of the new year, he can catch a couple extra hours of sleep and won't have to deal with the pressures of trying to grind out a living with a medium-sized stable. It figures to be a good day.