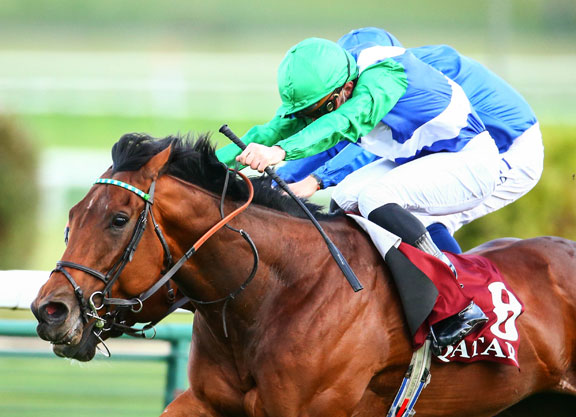 Enable (GB) (Nathaniel {Ire}) may have come up short in her history bid on Sunday, but ParisLongchamp was still able to host a ground-breaking mare as One Master (GB) (Fastnet Rock {Aus}) brought up an unprecedented third victory in the G1 Qatar Prix de la Foret. Covered up early by Pierre-Charles Boudot as Godolphin's 7-5 favourite Earthlight (Ire) (Shamardal) took the bull by the horns after the first two furlongs, the 29-10 second favourite was launched a furlong out to reel in that rival in a frantic final 50 metres and register the landmark win by a short-neck as Safe Voyage (Ire) (Fast Company {Ire}) made it three seven-furlongs specialists in a line a short head behind in third. “She's a fantastic filly and comes good over this track and trip,” trainer William Haggas said. “She was given another brilliant ride from Pierre-Charles and wants to win. She had to battle it out today, but she did it. The last horse to win two Forets was Moorestyle (GB), who was ridden by Maureen's father and trained by her uncle, so this is very unique and I suspect it'll take some beating. It's a shame that the other mare couldn't make it three on the day, but this is a good feat in itself. She looks after herself and we haven't over-raced her and when you do that they repay you.”

First brought here in 2018 as a 33-1 shot, One Master had stall 15 to overcome on ground a touch livelier than she likes but in the early days of “PC” she was smuggled by another Godolphin runner in Inns of Court (Ire) (Invincible Spirit {Ire}) to edge a short-head verdict. A year on, the bay had a kinder draw and the very soft ground she thrives on and was the relatively comfortable winner from City Light (Fr) (Siyouni {Fr}), having placed in the G1 Queen Anne S. and G1 Falmouth S. over a mile during the summer. Turned to six-furlong sprinting thereafter, she was second in the G1 Qipco British Champions Sprint S. at Ascot and sixth on her seasonal bow in the G1 Diamond Jubilee S. back there June 20 before heading back over further.

Arguably unlucky when beaten less than a length by Nazeef (GB) (Invincible Spirit {Ire}) when fourth under Boudot in the latest edition of the Falmouth July 10, the homebred was paired with Tom Marquand for her next three outings over this trip and got their partnership off to a flyer when defying a penalty with another of her late shows in Goodwood's G3 Oak Tree S. July 31. Left behind by Safe Voyage when 3 1/2-lengths second to that rival in the Aug. 22 G2 City of York S., she was beaten in a bobbing finish by Wichita (Ire) (No Nay Never) in Doncaster's G2 Park S. Sept. 12 but this was the day that mattered and she was produced brilliantly to pull off the rare achievement.

Again played late, it was her burst between the 300 and 100-metre mark that made the difference as Safe Voyage took time to wind up and Earthlight possibly paying for having to use up energy to get across from his wide draw and on to the lead. “She is very laid-back and easy to deal with and she knows how to race. I don't know what it is about this time of year, but she seems to come good and we haven't missed a beat this year. She's run in every race we've wanted her to and I'm thrilled for everyone here. She'll have another run, I suppose, if she's okay and she's in both races at Ascot over six and a mile and I quite fancy the Breeders' Cup at Keeneland as she's pretty nippy. I'll have to speak to Roy and Gretchen, but I'm absolutely thrilled for them as they have been fantastic supporters of ours and they said straight after last year 'let's have another season in training' so good for them.”

Godolphin's Lisa-Jane Graffard said of the runner-up, who almost held off the mare in a pulsating finish. “Earthlight has run a super race. He was in such good form–you could see in the paddock that he was really happy to be at the races–and was almost a bit too well in himself. Mickael said that no-one else wanted to go on, so he found himself in front which may have cost him slightly in the dying strides. We can't look for too many excuses, as he has been beaten by a mare who knows her way round Longchamp with her eyes closed. One Master is fantastic and connections have done a great job in bringing her back in peak form again. We are really pleased with Earthlight and Mickael felt that he fought hard all the way to the line.”