Home » Archive » Europe » The Weekly Wrap: While The Light Lasts

The Weekly Wrap: While The Light Lasts 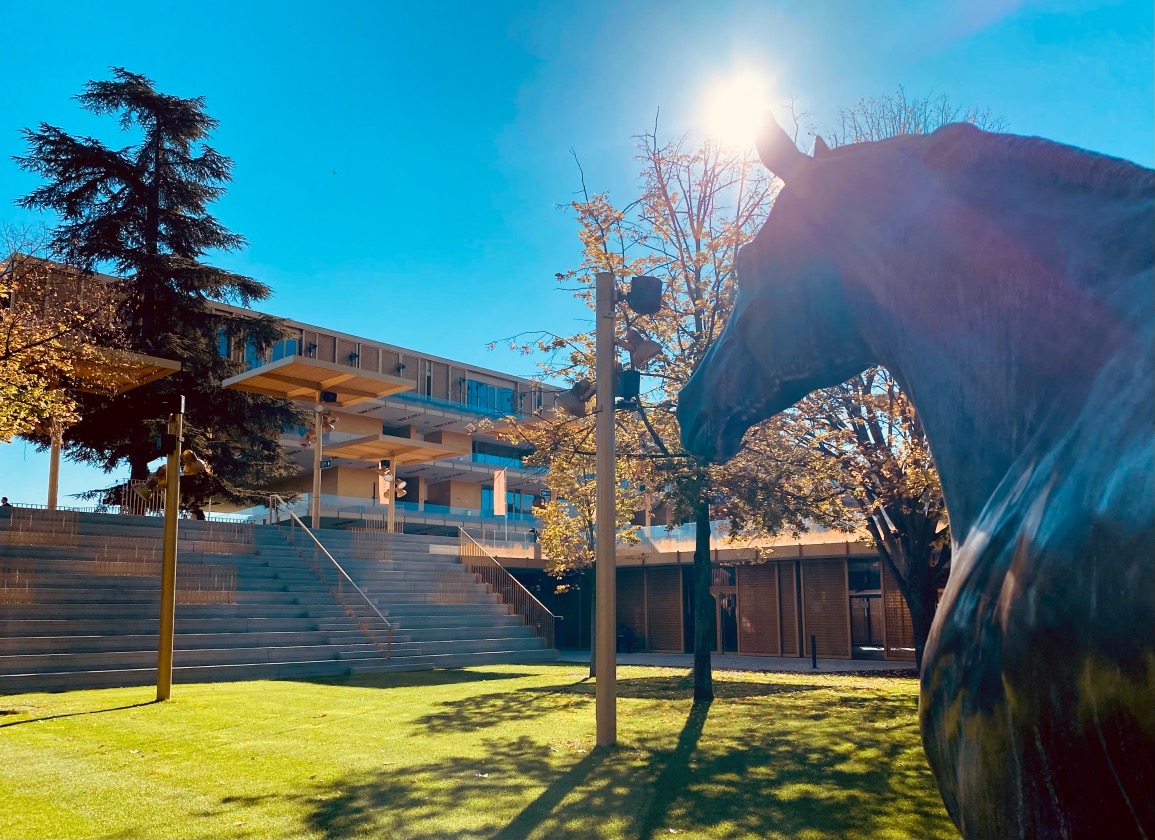 Last orders are being called for the European Flat turf season. Cheltenham and Aintree have been knocking loudly on the door but there are still some important scores to settle on the level, and in Paris, where this correspondent was fortunate enough to be billeted this weekend, the major Group 1 action was conducted in a blaze of life-affirming autumnal glory that may almost sustain us until the spring.

The four Group 1 races around the world on Saturday, in England, France and Australia, went to the offspring of Irish-based stallions, with State Of Rest (Ire) (Starspangledbanner {Aus}) getting the ball rolling in the Cox Plate.

A combination of travel difficulties and the stringent new veterinary checks means that there are fewer European horses in town for the key races in Melbourne this spring but that didn't stop Moonee Valley's flagship race going to the sole international challenger, trained by Joseph O'Brien, who has already lifted the Melbourne Cup twice in his relatively short career.

Bred at Tinnakill House by Dermot Cantillon and Meta Osborne, the 3-year-old State Of Rest has already clocked up more airmiles than many of his older stable-mates and it was perhaps a bold move to take him to New York for the GI Saratoga Derby off the back of one third-place finish this season in a listed race at the Curragh. But it was one that paid off handsomely for his owners in the Teme Valley Racing syndicate. He had the Belmont Derby winner Bolshoi Ballet (Ire) (Galileo {Ire}) behind him that day in fourth and 77 days later he returned on the other side of the world to cause a bit of a stir in the Cox Plate.

It was a great day for Irish racing, as not only was he bred and trained in the country, but State Of Play was ridden by one-time journeyman jump jockey Johnny Allen who has carved out a great career for himself on the Flat in Australia.

In his post-race interview conducted after a prolonged enquiry into possible interference between State Of Play and runner-up Anamoe (Aus), Allen remembered his former boss, the late Joe Crowley, who was also the grandfather of Joseph O'Brien.

“I'm sure if he's looking down from above he'd have a smile on his face,” said Allen, before adding, “There were too many Paddys in [the enquiry] and the boys were saying they couldn't understand us.”

Ten years after Joseph O'Brien rode Camelot (GB) to victory in the then-Racing Post Trophy for his father, Aidan O'Brien was in the limelight again at Doncaster when sending out his tenth winner of the renamed Vertem Futurity, appropriately enough with a son of Camelot, Luxembourg (Ire).

In many ways Luxembourg weaves some old and new strands of the Coolmore/Ballydoyle empire neatly together. The colt, who is now 9/2 favourite for next year's Derby, was bred by Ben Sangster, whose father Robert bred Luxembourg's great grandsire Sadler's Wells. Both man and horse have played such significant roles in the development of Coolmore.

Luxembourg carries the colours of one of the syndicate's newer members, Georg von Opel, who races under the Westerberg banner, and whose significant investment in bloodstock in recent years is certainly deserving of a colt with such promise.

The same can be said for the likeable and reserved Ben Sangster. Not one to blow his own horn, he can certainly permit himself a quiet smile of satisfaction following a successful autumn on the track and in the ring. At Goffs in late September, Sangster sold Luxembourg's full-brother for a sale-topping €1.2 million. Three days later at Newmarket he enjoyed a Group 1 victory as an owner in partnership with his wife Lucy, son Ollie, and James Wigan when Saffron Beach (Ire) (New Bay {GB}), trained by Sangster's step-sister Jane Chapple-Hyam, won the Sun Chariot. Bought by Liam Norris as a foal for 55,000gns as an intended pinhook, Saffron Beach was never really supposed to run for the partners, but a foot issue scuppered her appearance at the yearling sales. Bad luck turns to good luck.

Now Sangster can spend the winter dreaming of becoming the breeder of a Derby winner, having already notched one Epsom Classic in this regard with the Oaks heroine Dancing Rain (Ire) (Danehill Dancer {Ire}).

Jane Chapple-Hyam is likely to be high on Ballylinch Stud's Christmas card list after this season for not only has she provided resident stallion New Bay with his first Group 1 winner in Saffron Beach, but last week she sent out an exciting youngster from his second crop in Claymore (Fr), a €5,000 yearling purchase-turned-£10,000 breezer who stormed the Rowley Mile for a four-length novice victory over Godolphin favourite Noble Order (Ire) (Dubawi {Ire}) on Wednesday.

It was a good week for New Bay with four new juvenile winners, while his G2 Champagne S. winner Bayside Boy (Ire)–another in the Teme Valley Racing ownership–finished third in the G1 Vertem Futurity after filling the same spot in the G1 Dewhurst S.

A Day To Remember For Ferguson…

Marc Chan's Angel Bleu (Fr), bred by Pan Sutong at Ecurie Des Monceaux, has been highly tried this season but has answered almost every call. Having made three starts for two wins before Royal Ascot, the son of Dark Angel (Ire) was perhaps a touch unlucky in the G2 Coventry S when finding himself short of room as he attempted to make his run, and he has thrived since then. Runner-up on his next start at Ascot in the listed Pat Eddery S., he bounced out three days later to take the G2 Vintage S. at Goodwood in soft sound and has relished even more testing conditions when taking back-to-back Group 1s in France. Three weeks after his Prix Jean-Luc Lagardare victory he battled home to take the Criterium International by a head from Coolmore's Ancient Rome (War Front).

Angel Bleu's trainer Ralph Beckett indicated at Saint-Cloud on Saturday that a return to France may well be on the cards for the youngster for the Poule d'Essai des Poulains next spring.

It was another good day weekend for the Brits in Paris with all three Group 1 contests falling to cross-Channel raiders. For James Ferguson, only in his second season of training, it was a day he will never forget as the diminutive El Bodegon (Ire) (Kodiac {GB}) led his rivals a merry dance when making all in the Criterium de Saint-Cloud to give his trainer a first Group 1 success.

Bred by Cecil and Martin McCracken, the tenacious El Bodegon joins his full-brother Best Solution (Ire) in being something of an outlier among Kodiac's stock as a colt who clearly relishes a decent trip. Those reserves of stamina are doubtless drawn from his dam's side, as he has Eva Luna (Alleged) as his third dam, with her offspring including the St Leger winner Brian Boru (GB) (Sadler's Wells) and his full-sister Soviet Moon (Ire), who is the dam of Derby and Arc winner Workforce (GB) (King's Best).

Best Solution, who was second in a strong renewal of the same race in 2016, which was won by subsequent Arc winner Waldgeist (GB), with fellow subsequent Group 1 winners Capri (Ire), Wings Of Eagles (Fr) and Rekindling (GB) behind him, became a stalwart of the Godolphin operation, landing two Group 1 races over a mile and a half in Germany en route to winning the Caulfield Cup. He is now standing at Gestut Auenquelle alongside Soldier Hollow (GB).

“Pretty incredible,” was how Ferguson described his first Group 1 winner as El Bodegon returned to the winner's enclosure. “We love the horse and we planned this as his next race after his previous win in France, but to be ahead with a furlong to go wasn't really part of my plan. I thought he would have to work very hard but he has obviously improved with every run and he takes travelling very well.”

He added, “This horse is not overly big but he has a lot of presence and it's very exciting to wonder what we might have for next year. You have to aim high when you have a horse like this.”

Prior to starting out on his own, Ferguson, who turned 32 on Sunday, served time as a pupil assistant to Sir Mark Prescott and also as assistant to Charlie Appleby at Godolphin.  Touchingly, Appleby, along with William Buick and Godolphin's managing director Hugh Anderson, were among the first to embrace their former colleague at Saint-Cloud after their Godolphin representative Goldspur (Ire) (Dubawi {Ire}) finished third to El Bodegon.

…And Also For Hornby

The weekend's action in France also provided a memorable couple of days for Ralph Beckett and Rob Hornby. Beckett posted a Group 1 double when the Julian Richmond-Watson homebred Scope (GB) (Teofilo {Ire}) landed the Prix Royal-Oak 24 hours after the victory of Angel Bleu at Saint-Cloud.

The win was extra special for Hornby as it was his first Group 1 success on his first ride at Longchamp. The jockey, who was sidelined last December with a serious shoulder injury after a nasty fall at Wolverhampton, had clearly done his homework, however, and was spotted out walking the track before racing.

He said, “It's unbelievable. I'm just delighted for everyone involved and for the whole team–it's been a Group 1 double on Saturday and Sunday.

“He had to dig deep off the elbow. They came at him on either side, but he just stuck his neck out; he's really thriving. I'd like to think that there's more to come next year. If it all keeps going the right way we could have a very exciting horse to look forward to.”

Hornby continued, “I'm very grateful to Mr Beckett for the opportunity and to everyone who has supported me the whole way through–Andrew Balding, who I was apprenticed to, and Jonny Portman, there are so many people to mention. My agent works very hard, we all work hard, so when it pays off on days like this it's very special.”

Last year's Prix Royal-Oak runner-up Valia (Fr) (Sea The Stars {Ire}) returned for a second attempt, finishing sixth this time around having won the G2 Prix Radio FG at the track back in July. The 4-year-old Aga Khan-bred filly also provided a footnote in history as the final Group 1 runner for her illustrious trainer Alain de Royer Dupre, who retires at the end of the season and has notably been training for the Aga Khan for 40 years. He will be succeeded at Aiglemont by his former assistant Francis Graffard.