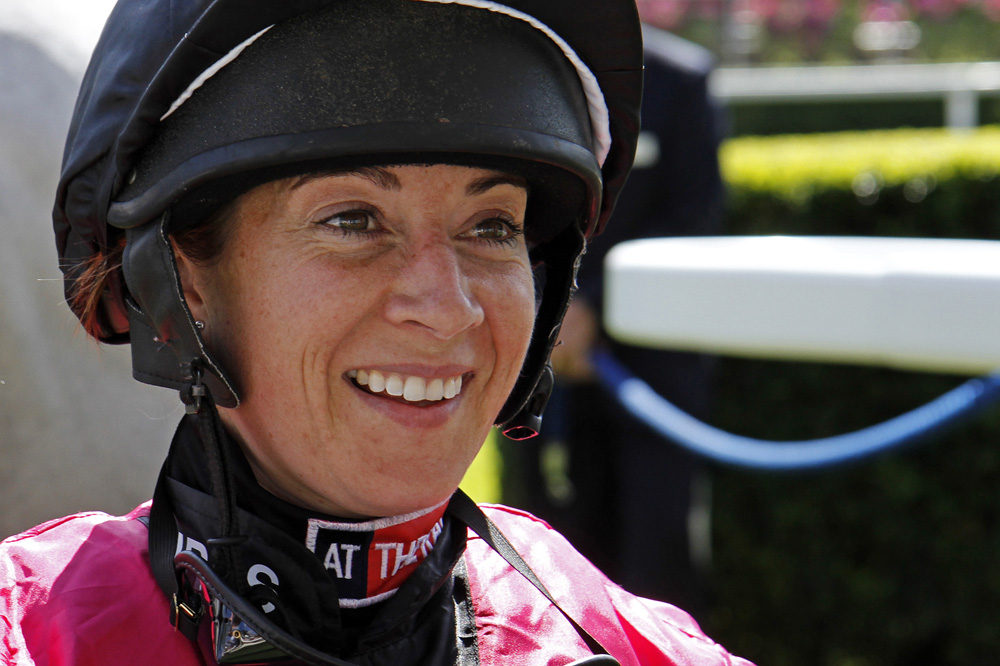 Hayley Turner was the leading jockey at the Shergar Cup | racingfotos.com

Following last week's Wrap, I realise I may be in danger of being labelled a rampant feminist, but I'm afraid I'm about to beat the drum for the women again.

Let's start with the Dubai Duty Free Shergar Cup, a weird and wonderful anomaly to the racing programme thanks to its team format, but one which apparently grows in popularity each year and features among its four teams one restricted solely to female jockeys. Some folks bridle about the team being labelled 'Girls' but this shouldn't be seen as being in any way derogatory. I turn 49 today and I'll be delighted if anyone out there is still calling me a girl. Vastly preferable to old bat.

The girls' team was only added to the Shergar Cup in 2012, but the girls have now beaten the boys twice in those seven years, each time led by Hayley Turner, chief cheerleader for the event in general and this year joined by Hollie Doyle and Josephine Gordon. You won't see a more polished ride than the one Turner gave Via Serendipity (Ire) (Invincible Spirit {Ire}) to win the Shergar Cup Mile and her two other placed finishes meant that she also won for the first time the Silver Saddle, awarded to the day's leading rider and named after the much-missed Alastair Haggis, who died in 2014 at the age of just 51.

The most heroic performances on the track this week from our four-legged friends were generally posted by females. Alpha Centauri (Ire) (Mastercraftsman {Ire}) can now rightly lay claim to being the outright star of the season with her fourth straight Group 1 victory. That it should come in the Prix du Haras de Fresnay-le-Buffard Jacques le Marois, the race sponsored by her breeder for more than 30 years and previously won by her great grandam Miesque (Nureyev) and grandam East Of The Moon (Private Account) made her success all the sweeter. There was also an all-female cast in the celebratory photograph as trainer Jessica Harrington was joined by the TDN Rising Star's owner-breeder Maria Niarchos and her niece Electra.

Earlier on the Deauville card, juvenile Pure Zen (Fr) became the second stakes winner of the weekend for Zoffany (Ire) following the victory of Main Edition (Ire) in the G3 german-thoroughbred.com Sweet Solera S. at Newmarket.

Pure Zen's win in the Prix Francois Boutin came on just her third start for Myriam Bollack-Badel and her Italian owner-breeder Nicola Gallo of Scuderia Micolo, who bought her dam, Dolce Attesa (GB) (Dr Fong), for just £5,000 as a yearling through Federico Barberini.

Deauville was also the scene of another major step forward for the David Lanigan-trained Worth Waiting (GB) (Bated Breath {GB}), whose three-length victory in the G3 Prix Minerve was her fourth success in a row. Bred by Whatton Manor Stud and sold as a yearling for 40,000gns, Worth Waiting has twice been withdrawn from horses-in-training sales in the last year, most recently from the Tattersalls July Sale. The clue is quite clearly in her name and owner Saif Ali will be delighted that he kept patience with the filly who will surely take her chance in Group 1 company before too long.

A second group winner for the former top-class sprinter Bated Breath, Worth Waiting is a middle-distance filly through and through, which is no surprise given that her dam Salutare (Ire) (Sadler's Wells) twice won over a mile and seven furlongs, a distance well within the capability of Montare (Ire) (Montjeu {Ire}), the mare's three-parts-sister and winner of the G1 Prix Royal-Oak. This family will be discussed further in Wednesday's column by Andrew Caulfield.

Montare has herself gone on to produce Journey (GB) (Dubawi {Ire}) for owner-breeder George Strawbridge, winner in 2016 of the G1 QIPCO British Champions Fillies & Mares S., which is one of the possible end-of-season targets for Worth Waiting.

We're edging towards the time of the year when the 2-year-old maidens become increasingly laden with top-drawer pedigrees. Only two of last year's Tattersalls October Book 1 top 10 have appeared so far on the racecourse. The first to win was Fantasy (Ire), by Invincible Spirit (Ire) out of Cassandra Go (Ire), and she was followed on Saturday by Zagitova (Ire), the Galileo (Ire) half-sister to Garswood (GB) (Dutch Art {GB}) bought by MV Magnier and the Mayfair Speculators for 1.6 million gns.

With the benefit of a July 14 debut at Newmarket behind her, Zagitova was the dominant force in Saturday's Cork maiden which she won by 4 1/2 lengths and she may head next to the G2 Debutante S. She is out of the Cheveley Park Stud-bred mare Penchant (GB) (Kyllachy {GB}) who was sold by the Thompsons back in 2010 for 21,000gns, the same year that her weanling son and subsequent Group 1 winner Garswood was sold for 19,000gns. He is now standing as a stallion at his birthplace and is currently represented by his first crop of runners.

Following two group winners in Cheveley Park's own colours at Glorious Goodwood, the stud has enjoyed more reflected glory this weekend via Advertise (GB), who broke the Irish stronghold on the G1 Keeneland Phoenix S. to become the first British-trained winner of the juvenile contest in 21 years. Trained by Martyn Meade and bought by his son-in-law Dermot Farrington as a yearling for £60,000, the son of Showcasing (GB) was bred by Cheveley Park Stud from the six-furlong winner Furbelow (GB) and is the fifth individual Group 1 winner this year out of a mare by the stud's great flagbearer Pivotal (GB) following Cracksman (GB), Olmedo (Fr), Rhododendron (Ire) and Mikki Rocket (Jpn).

As a fast, young son of a popular sire, Advertise will doubtless already have plenty of stallion masters in hot pursuit. In time, he would make a commercially very desirable addition to the National Stud ranks in Newmarket, where his owner Phoenix Thoroughbreds already has an interest in freshman sire and fellow Meade/Farrington Group 1 winner Aclaim (Ire).

Wertheimer Sires On The Up…

Cheveley Park Stud can also drawn plenty of encouragement from the increasingly good results for Intello (Ger), who has five black-type winners from his first crop including the G1 Prix Jean Prat winner Intellogent (Fr). The son of Galileo (Ire) recently completed his third season in Newmarket having stood his first two years there followed by two years at Haras du Quesnay.

The Head family's Normandy farm is also home to another Wertheimer-bred young stallion, Anodin (Ire), the brother to Goldikova (Ire) who narrowly lost out to Karakontie (Jpn) in the GI Breeders' Cup Mile. His is perhaps not a name many people would have expected to be so prominent in the first-crop sires' table this year but the 8-year-old son of the former Quesnay stalwart Anabaa has been quietly notching the winners of late and, numerically, is tied for fifth place on eight winners with Slade Power (Ire). His star performer to date is the Wertheimers' Harmless (Fr), a rare non-homebred to run in the brothers' colours, who won the Listed Prix Roland de Chambure at ParisLongchamp and is unbeaten in three starts.

A Scottish-named, Chilean-bred Grade I winner in America by an Irish stallion is just the latest example of the shrinking world of bloodstock and Robert Bruce (Chi), the Fast Company (Ire) colt who has only just turned four by his Southern Hemisphere birth, was an intriguing winner of the Arlington Million.

He left trainer Patricio Baeza in his native country over the winter to join Chad Brown, who also trained the imported runner-up, Shadwell's Almanaar (GB) (Dubawi {Ire}), a dual Group 3 winner during his days with Freddy Head.

Owned and bred by Haras Convento Viejo, which stood Fast Company during his shuttling days, Robert Bruce is a son of the Chilean Oaks winner Lady Pelusa (Arg) (Orpen) from a family which stretches back to Idle Hour Princess (Ribot {Ity}), a sister to the Classic-winning duo of Ribocco and Ribero. The colt won four Group 1 races during his unbeaten run in Chile, and his close relation Mister Fluff (Chi), by the same sire and out of a half-sister to Lady Pelusa, has been Group 1-placed in the Chilean versions of the 2000 Guineas and St Leger for the same connections.

Runner-up to New Approach (Ire) in the G1 Dewhurst S. of 2007, Fast Company wasn't seen again on the racecourse and didn't enter stud until four years later, starting at Rathasker Stud at €5,000. After four years he moved to Overbury Stud for one season in 2016. This was also the year his Irish 1000 Guineas-winning daughter Jet Setting (Ire) emerged, prompting a switch to Darley's Kildangan Stud, where he remains and no longer shuttles to South America.

Fast Company covered his smallest book the year he stood in Britain and some of the offspring of those 64 mares will be at the forthcoming yearling sales. Heading to Tattersalls October Book 2 is a half-brother to this season's Group 3 winner Indian Blessing (GB) (Sepoy {Aus}), while a half-brother to Havana Grey (GB) (Havana Gold {Ire}) was bought by Godolphin for 85,000gns at last year's foal sale.

Not So Shambolic Start…

Computerised systems for racing colours make the choosing of owners' silks a little dreary these days, despite the BHA's attempts to liven things up by making the odd wacky design available.

The most desirable colours remain the plain silks, though sadly one could no longer register shades such as the Duke of Devonshire's 'straw' or Lord Howard de Walden's 'apricot'. It was a bonus then to see those straw colours being carried to a debut victory at Newmarket on Saturday by Shambolic (Ire), a Shamardal filly bred in partnership by the Duke of Devonshire with the Duke of Roxburghe out of Comic (Ire) (Be My Chief). This of course makes the John Gosden-trained filly a half-sister to the Hong Kong star Viva Pataca (GB) (Marju {Ire}), and the same stable is also home to the mare's 3-year-old colt George Villiers (Ire) (Dubawi {Ire}), who is a dual winner to date for Princess Haya.

Comic was 20 when Shambolic was foaled and this year she gave birth to a filly by Kingman (GB) on Feb. 3.

Shambolic wasn't the only well-related and impressive first-time-out winner from the Gosden stable last week. As the heatwave gradually abated, Too Darn Hot (GB) (Dubawi {Ire}) gave us one last blast with a seven-length victory at Sandown. Lord Lloyd-Webber's 'TDN Rising Star' is a brother to So Mi Dar (GB) and Lah Ti Dar (GB), both of whom have impressed in Classic trials before meeting setbacks ahead of intended starts in the Oaks. Their dam is Watership Down Stud's celebrated treble Group 1 winner Dar Re Mi (GB) (Singspiel {Ire}).