Home » Archive » Shared News » The Week in Review: Will the Curse of Apollo Finally Fall?

The Week in Review: Will the Curse of Apollo Finally Fall? 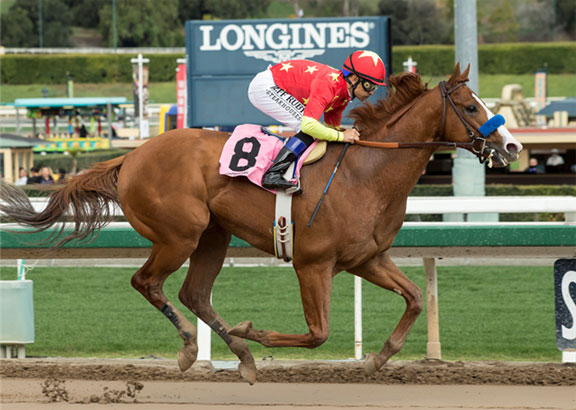 On the hardwood, and not the racetrack, we learned this week that there is no such thing as an irrefutable truth in sports. It was supposed to be a certainty that a No. 16 seed cannot beat a No. 1 seed in the NCAA tournament. They were, entering this year's tournament, 0-135. Let's make that 1 for 135. A school you never heard of, No. 16 UMBC (University Maryland, Baltimore County) not only beat No. 1 seed Virginia Friday, they walloped them, 74-54.

Magnum Moon cruised to victory in Saturday's GII Rebel S. at Oaklawn Park, looking the part of a serious contender for the GI Kentucky Derby. He won by 3 1/2 lengths over a very good horse in Solomini (Curlin). Next up will likely be the GI Arkansas Derby and then he'll prepare to take on 19 challengers in the Kentucky Derby. The bigger challenge, however, may be the Curse of Apollo.

No horse has won the Kentucky Derby without having started as a 2-year-old since Apollo in 1882. As in it's been 136 years since the feat has been accomplished. (Do you believe in omens? It has been 136 years since Apollo and it was the 136th game played between a No. 16 and No. 1 where UMBC pulled off the shocking upset). When it comes to the Kentucky Derby, it is the one “rule” that has stood up year after year, decade after decade. This year, it may get its stiffest test ever.

Magnum Moon did not make his debut until Jan. 13, winning a maiden special weight race at Gulfstream. Trained by Todd Pletcher, undefeated and an easy winner of the prep for the Arkansas Derby, he won't even be the favorite in that race. Justify will.

Trained by Bob Baffert, Justify debuted Feb. 18 with a dazzling maiden win at Santa Anita. He backed that up with a 6 1/2- length win in a Mar. 11 allowance, another performance that was nothing less than sensational. When it comes to talent, it's quite possible that he has no equal among a 3-year-old male crop that is good and deep.

Ironically, these two are scheduled to square off in the Arkansas Derby, and if either wins, they might just be the Kentucky Derby favorite. But what about that curse?

While it's still asking a lot of a horse to win the Derby with so little seasoning and just three months or so after their first career start, common sense tells you it can be done. The “2-year-old” rule is not an irrefutable truth.

The typical Kentucky Derby field of the modern era bears no resemblance to the ones that lined up in 1948, '58 or '68. Back then, most horses had already run 12 or 13 times prior to the Derby and, probably, six or seven times as a 2-year-old. They were tough and experienced and had an advantage over a horse that had not been battle tested. That's no longer the case. It will be hard to find a Derby starter this year who has had more than six or seven career starts or a lengthy 2-year-old campaign. That's just not how it is done anymore.

The effects of how trainers now prepare horses for the Derby have already been seen. Like Justify, Bodemeister (Empire Maker) was trained by Baffert and did not start at two. After winning the Arkansas Derby, he finished second in the 2012 Kentucky Derby. Curlin (Smart Strike), another Arkansas Derby winner that did not start at two, finished third in the 2007 Kentucky Derby and went on to win the GI Preakness S.

Horses like Bolt d'Oro (Medaglia d'Oro) and Good Magic (Curlin), top Derby contenders that raced at two, might have an edge on Magnum Moon and Justify–but just an edge. Pigs will never fly. But a horse who has not raced at two will win a Kentucky Derby, perhaps as soon as this year.

Big Cap on the Move

On Saturday's “Down the Stretch” show on Sirius XM (shameless plug…I am the co-host of the show along with Dave Johnson), Santa Anita Racing Secretary Rick Hammerle gave a blunt and honest assessment of the GI Santa Anita H., admitting the race is in trouble and confirming that it will be moved from its traditional March spot on the calendar. Run in between the GI Pegasus World Cup and the GI Dubai World Cup, the Big Cap is in no man's land, as it cannot compete with the two richest dirt races in the word. As a refection of the fields they have been getting lately, Santa Anita has dropped the Big Cap purse from $1 million to $600,000.

“It's one of the most historic races, not only at Santa Anita, but in all of racing,” Hammerle said. “We absolutely want to do something. The Dubai World Cup went back to dirt a few years ago and, lo and behold, the Pegasus came up two years ago. We kind of waited to see what would happen with the Pegasus. There had been some talk about the Pegasus coming to Santa Anita, but it's been decided now that it will stay in Florida.

“If we do not move [the Santa Anita H.] now, it's our fault. Looking at the calendar, we have a few places in mind. We could move it to opening day, but, to me, that's not the right thing to do, or we could move it to later on the calendar. There are a couple of spots I think fit later in the year so far as races like this one, a Grade I going a mile-and-a-quarter on the dirt. It could be the start of the second half…give them enough time for the Dubai horses to come back. We need to get the purse back up to $1 million, at least. I saw a quote the other day where someone said the Big Cap has been dealt a 'dead man's hand' and I believe that is true. If we don't reshuffle the deck, it's our fault.”

Hammerle said a new date for the Big Cap has yet to be chosen, but said it will be moved. Look for it to reappear sometime in late May or early to mid-June.

No one should every be criticized for trying to come up with new and innovative ideas in the sport. In fact, we don't have nearly enough of that. But the idea to have two Breeders' Cups, one in November and one in December, was a truly bad idea and, last week, the Breeders' Cup board, thankfully, sent it to its grave.

The main change was going to be the creation of a Breeders' Cup race restricted to 3-year-olds run in November followed by a Breeders' Cup race for 3 and up in December. That would have been like stopping the Super Bowl after the third quarter and finishing it a month later.

You can always improve on something, but the Breeders' Cup is fine just the way it is. It's a great event. But what it's not is the Triple Crown, and it appears that some on the board are guilty of a case of “Kentucky Derby envy.” That was evident by their desire to create a 3-year-only race, which, by the way, last year would have had a dreadful field as the entre division save West Coast (Flatter) had fallen apart. The Derby is a national sporting event and your Aunt Gladys knows who's running and bets the 5 every year because it's her favorite number.

The Breeders' Cup will never handle as much as the Derby, get the TV ratings the Derby gets, derive the TV revenue the Derby gets or be followed closely by the mainstream media. Aunt Gladys doesn't know what the Breeders' Cup is. You can tell her it's a real cool year-end event for horse racing that brings most of the best horses together and decides many a championship. I think that's more than good enough.