Will Players Take a Hike over Takeout Hike 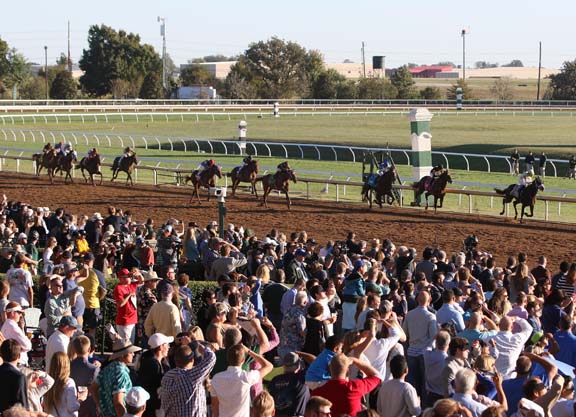 Imagine if management at a racetrack asked horse owners and trainers to accept an up-front purse cut, in the form of a lower contractual slice of wagering revenue, so that the betting takeout could remain low enough to retain quality horseplayers.
The reasoning behind the move would be that the track wanted to remain competitive as a top-tier wagering option in a shrinking marketplace, and the upside would be that if enough horseplayers embraced the low-takeout track, overall betting handle would rise, and so would purses. If everything worked out as planned, the larger theoretical pie would more than make up for the smaller-percentage slice.
It’s unlikely any track management would ever initiate such a conversation in today’s pari-mutuel marketplace. It’s also difficult to think that owners and trainers would embrace any proposition that involved trading up-front money for a non-guaranteed future benefit.
Yet if you think of the economic model of North American racing as a simplified triangle (whose three sides are comprised of owners/trainers, track managements, and bettors), and then switch around the above-referenced proposition so that the bettors and owners/trainers are on opposite sides of the equation, that pretty much sums up the argument that Keeneland Association, Inc., offered to horseplayers last week when it came to light that the track would be increasing betting takeouts (story here).
Starting with the upcoming fall meet, Keeneland intends to hike the take on straight wagers from 16 to 17.5%, and the take on most exotic wagers will go up from 19 to 22%.
“I think at the end of the day when the handicappers see the quality of racing we put on, [and] have a great experience when they come to the track, and know how we’re spending those monies back to promote the sport at the very highest level, I believe that they’re going to continue to support our racing,” Bob Elliston, Keeneland’s vice president of racing and sales, told me in an Aug. 7 interview.
That’s quite a leap of faith–not just the part about believing that the Keeneland product will be so irresistibly attractive that bettors will ignore the increased costs of playing it, but the implied belief that horseplayers will feel good about footing the bill to ensure a (theoretically) upgraded product.
“I guess my first reaction is that I am extremely disappointed that Keeneland would do this to horseplayers,” Jeff Platt, the president of the Horseplayers Association of North America, told me. “My second reaction and prediction is that this is actually going to cause purse money to go down, that they’re actually going to have purse cuts as a result of this, not purse increases…. Players are going to bet less as a result of this. There’s no question in my mind.”
In an attempt to represent views from all three sides of the triangle, I also left an Aug. 7 voicemail for Rick Hiles, the president of the Kentucky Horsemen’s Benevolent and Protective Association, asking what owners and trainers thought about the long-term implications of boosting purses via takeout hikes. I have yet to receive a call back.
I wasn’t surprised there was immediate outcry from horseplayers, including threats of organized betting boycotts against Keeneland. But I was surprised at the volume and intensity of those protests.
The level of immediate horseplayer pushback directed at Keeneland, at least anecdotally, seems to exceed the ire aimed at Churchill Downs, Inc., when that corporation used the same Kentucky law to raise takeouts in 2014 at its Louisville flagship track.
That’s notable in and of itself, because–as we all know–it’s easy to rail and spew vitriol at corporate entities when we don’t like the decisions they make.
But venerable Keeneland has always been different, enjoying a uniquely trustworthy position in the pari-mutuel marketplace. For decades, that association has largely been recognized as a non-profit entity that does right by the horses, the sport, its traditions, and horseplayers.
As I was reporting on this story last Tuesday, I kept several internet browser windows open to monitor social media feeds and racing-related message boards that had quickly spiraling threads devoted to the takeout topic. As the anti-Keeneland backlash mounted, I was struck by the repeated “How could they?” tone of horseplayers expressing betrayal by a trusted source.
Culling through the myriad complaints yielded three cogent points that are likely to remain relevant long after the initial anger has subsided:
· The boycott, if one occurs, might take a bite out of Keeneland’s autumn race meet handle. But in the grand scheme of things, a boycott will just be huffing and puffing. The real threat to “blowing the house down” (on a national level, not just at Keeneland) already exists in the form of a slow but strong breeze caused by mid-level horseplayers ebbing away from the United States betting marketplace because they have trouble justifying the disquieting costs of throwing money at short fields amid widespread perceptions of not-on-the-level racing.
· While individual players might gripe about the takeout situation, will they really walk away from betting Keeneland in favor of C-level tracks whose takeouts are slightly lower? Keeneland does have a point–quality, nationally prominent horses and outfits are a big part of the equation. So if handle does end up increasing at Keeneland as a result of the takeout hike, expect lower-tier tracks to assume they too can follow suit with takeout increases–even if they don’t have the top-notch product to similarly ensure that customers will stick around.
· Well-respected Las Vegas oddsmaker Roxy Roxborough needed only 140 characters to pinpoint the industry’s most ominous long-range problem on Twitter: “‘Lower horse racing takeout train’ has left the station. Fiddling at the margins is akin to rearranging deck chairs [.] Non competitive structure [.]”
Roxborough’s post left me with the image of racing standing on the tracks looking forlornly after that departing takeout train, oblivious that the much-lower-take Sports Betting Express will be barreling in sooner than expected from the opposite direction.

‘Brown on green’ double at Arlington
Trainer Chad Brown scored an unprecedented Grade I double on Saturday, becoming the first conditioner to sweep Arlington Park’s two signature grass races on the same afternoon.
‘TDN Rising Star’ Beach Patrol (Lemon Drop Kid) scored in the GI Arlington Million less than an hour after Dacita (Chi) (Scat Daddy) took top honors in the GI Beverly D. S.
Each Brown trainee won by a hard-earned half-length, and neither was favored in the betting.
The victories also represented a Grade I double for owner Sol Kumin, who has an interest in the partnerships of both horses.
Kumin told the Chicago Sun-Times that the deep competition in both races made him consider not attending the races in person.
“I almost didn’t come. There’s so many good European horses, and they’re hard to handicap,” Kumin said. “I didn’t think we were going to win two races today. No shot.”
The wins were Brown’s second and fourth victories, respectively, in the Million and Beverly D. In fact, he’s now won three consecutive runnings of the Beverly D.
“I’ve watched [Brown] climb. He went from being a really good trainer to, in my opinion, being arguably in the conversation for best in the world,” Kumin told the Sun-Times. “He’s 38 years old and works as hard as anybody. And he is incredibly talented.”
The most visually impressive Grade I win on Saturday, though, belonged to Oscar Performance (Kitten’s Joy) in the Secretariat S.
Tracking the action as a stalking second for most of the 10-furlong journey, Oscar Performance loomed as a menacing presence until he was fully unleashed in the Arlington stretch. The 3-year-old ridgling relished being roused for the drive, exhibiting a powerful kick to the wire as an all-out pack of pursuers chased in vain 2 1/4 lengths in his wake.
Last year’s GI Breeders’ Cup Juvenile Turf winner has now won three straight graded stakes this season after faltering as the beaten favorite in his first two 2017 tries.

It’s post time (at multiple tracks)
News out of The Jockey Club Round Table conference on Sunday that conflicting simulcast post times are costing the industry $400 million annually was an eye-popping revelation (story here). Finally, someone has put a lost-dollar number to the annoying, nonsensical practice of major tracks scheduling races right on top of one another–and it’s a huge number.
Granted, no industry entity has the resources to refute or confirm the magnitude of the study undertaken by the management consulting firm McKinsey & Company, so this is only one party’s lost-handle prognostication. But even if McKinsey was way off–say by a factor of 10–wouldn’t $40 million in lost handle still be worth chasing down and recovering?
The coordination of post times seems like another project the industry could have tackled on its own long ago for relatively short money. I’d bet that for well under $1 million annually, the top five racing associations in the nation could get together, commission someone to write software that displays post times like an airport shows departing planes, and hire a team of competent every-day, industry-wise schedulers to oversee the grid like air-traffic controllers.
The goal would be for the top five tracks to adhere to strict, well-spaced post times, and the tracks would have to cede control over optimizing those nationally coordinated post times during the day to the independent scheduling grid controllers they hire. So if there’s a delay at Belmont Park, the controllers tell Gulfstream Park and Churchill Downs to adjust their post times accordingly to maintain smooth scheduling–not the other way around, with tracks telling the controllers when they’ll run. The incentive for compliance will be fully optimized handle for everyone.

As McKinsey exec Ben Vonwiller pointed out during his presentation, lower-level tracks wouldn’t need to directly participate in the optimized scheduling grid (in fact, they couldn’t, because the maximum number of tracks that can run races five minutes apart over the course of an hour is only six). Yet those other tracks would still see some trickle-down benefits from being able to look at the national post time grid and decide on their own where to best position their races in the gaps that remain.
In addition, just the fact that the industry would be taking a proactive step to correct a problem simulcasting customers have been complaining about for years would certainly have some ancillary public-relations value.
Global management consulting companies like McKinsey make money by identifying problems and then selling solutions to those problems. The racing industry should have seen and solved the decades-long post time conflict on its own long ago. But now that the $400 million lost-revenue number has been identified and publicly released in the context of a well-respected industry forum, perhaps the sport’s powers that be will be compelled to act.