The Week in Review: Will Longer Spa Meet Flourish at Belmont’s Expense? 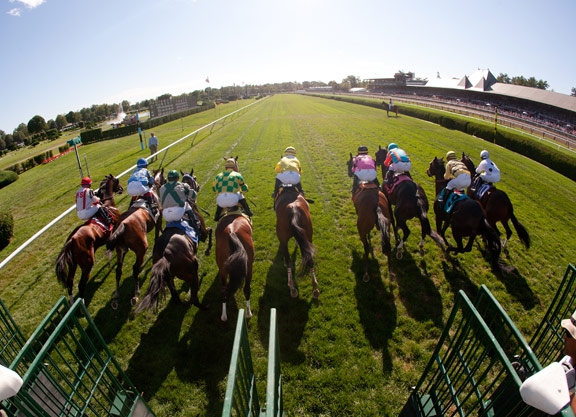 It’s official: The Saratoga Race Course meet will be starting earlier than ever in 2019, on July 11. It took the pending construction of a massive hockey arena some 150 feet from the Belmont Park paddock to push the New York Racing Association (NYRA) into a safety-related scheduling switch, but the issue of extending Saratoga’s historic race meet has been openly debated as an inevitability for years.

The chief arguments against tinkering with America’s premier boutique meet have always been aesthetic: Does too much of a good thing cease to be a “good thing” if stretched too thin? Will Saratoga’s vibe, ambience, charm, and racing product all suffer to some watered-down degree now that the season will last nearly eight weeks?

From an economic standpoint though, the earlier start seems to make sense because of the breathing room it affords the overall racing calendar. By keeping the number of race dates at 40 while building in a one-week earlier start date, NYRA has attempted to choose a minimally disruptive path toward elongating the Spa’s season. Opening week will feature four dates of racing; closing week will have six (winding up on Labor Day as in recent seasons), and the weeks in between will all feature five-day weeks, with Mondays and Tuesdays now dark.

Barring adverse weather, any July week of racing at Saratoga is bound to out-handle Belmont. And not having to fill an extra ten races per week should result in more robust field sizes. Saratoga had been the last major-meet holdout to six-day race weeks, and the strain showed in recent seasons, both in terms of quality and quantity. Adjusting to primarily five-day weeks in a sensible move.

Although the Saratoga stakes schedule has yet to be announced, the extra week could theoretically help certain divisions, particularly the trio of male and female 2-year-old graded dirt races that are traditionally run on opening and closing weekends, plus a middle weekend in between. Juveniles can now more realistically target two of the races in that series, and there should be additional maiden-breakers generated to help fill the ranks.

The Saratoga season annually means long days for backstretch workers, and the additional non-racing day each week should afford everyone behind the scenes a bit of a breather. Finding rental housing in and around town will probably get a touch tighter and expensive for anyone who has to work the entire meet, and there could be logistical problems for racetrackers who already entered lease agreements based on last season’s template of rental dates.

Away from the track, the business community is generally all for the earlier start because that means more customers in restaurants, bars, and hotel rooms. But a skim of the upstate New York news coverage on the expanded season does reveal that some business owners are concerned about finding and retaining good help in an already tight labor market.

Regardless of what happens at the Spa, there will still be ripple-effect issues at Belmont. Construction on the arena could mean late-afternoon twilight post times, and a portion of the Belmont fall meet could get shifted to Aqueduct. These woes could last for at least two years.

When the concept of a $1-billion hockey arena next to Belmont was announced in December 2017, NYRA officials were quick to tout how great the “partnership” between the arena and the racetrack would be. It was telling, though, that the words “horse racing” were never mentioned once by New York Gov. Andrew M. Cuomo or any representative from the arena at a press conference in Belmont’s unheated Turf and Field Club. It’s not much of a partnership if both sides don’t recognize and respect the other’s role.

Chris Kay, who at the time was NYRA’s president and chief executive officer, told TDN the day the arena deal was unveiled that “this is a very significant and historic day for racing.” He also said he hoped that horsemen’s concerns over construction interfering with racing and training would be “minimal.”

Kay abruptly resigned from his position last month for reasons that have not been officially disclosed. Let’s hope his overly enthusiastic predictions don’t turn out to be prophetic for the wrong reasons.

Even though the media focus right now is on the expanded Saratoga season, the long-term headaches for historic Belmont could turn out to be more viable economic and aesthetic threats to the sport in New York than starting Saratoga one week earlier.

In terms of the GI Kentucky Derby prep-race path, Tampa Bay Downs enjoys a comfortable niche as a B-level track capable of drawing A-level horses for its two top stakes races for aspiring sophomores. But in recent seasons, the GIII Sam F. Davis S. has not been kind to highly regarded layoff horses, as six of the last eight favorites for that stakes have gone down in defeat after Saturday’s 7-1 wire job by Well Defined (With Distinction).

GI Breeders’ Cup Juvenile runner-up Knicks Go (Paynter), backed to 19-10 in the betting, seemed primed to pounce while stalking in second for most of the race. But he never showed any true spark in the Davis, struggling home fifth. His stock as a Derby contender took a serious hit, accentuating the open question of whether or not he can replicate his long-shot heroics in Grade I races as a juvenile against a more seasoned cast of characters at age three.

Tampa can be a tricky, quirky, steeply banked sand-based surface that often plays souped-up on big race days (the last two track records for 1 1/16 miles were set consecutively on Sam F. Davis and GII Tampa Bay Derby days in 2017). Anecdotally, Tampa also seems to generate no shortage of “didn’t like the track” excuses from trainers.

But also-rans can take heart: Most recently, Catholic Boy (More Than Ready) was an odds-on loser in the 2018 edition of the Davis. Yet he flourished later in the season as a dual-surface Grade I winner on both turf and dirt, including a win in the GI Travers S. at Saratoga.

Knicks Go burst onto the national radar last October with a 70-1 stunner in the GI Breeders’ Futurity at Keeneland. Ironically, Dream Maker (Tapit), the horse who was the beaten favorite in that race, came back off a four-month layoff to win a Fair Grounds allowance race on Saturday by a gaudy 8 1/2 lengths, re-asserting himself as a potential Classics threat.

A John Oxley homebred whose female family traces several generations back to six-time Grade I winner and Eclipse Award winner Beautiful Pleasure, ‘TDN Rising Star’ Dream Maker broke his maiden on debut at Churchill Downs last June, was not badly beaten when fifth in the GI Hopeful S. at Saratoga, then lost all chance when stumbling badly at the break and getting rank in that debacle of a Keeneland stakes try.

Firing fresh off the bench on Saturday as the 13-10 favorite, the Mark Casse-trained Dream Maker loped four wide on both turns, then inhaled five overmatched rivals under a moderate hand ride.

“I don’t know if you saw, but after the race he took off, which speaks volumes for the future,” Casse told Horse Racing Nation Sunday. “If he is going to make the Derby–which we think he is a Derby horse–we kind of like the Tampa Bay Derby and then maybe the [GII] Blue Grass [S.]”