The Week in Review: Will 2020 Super Bowl in Miami Create Pegasus “Perfect Storm”? 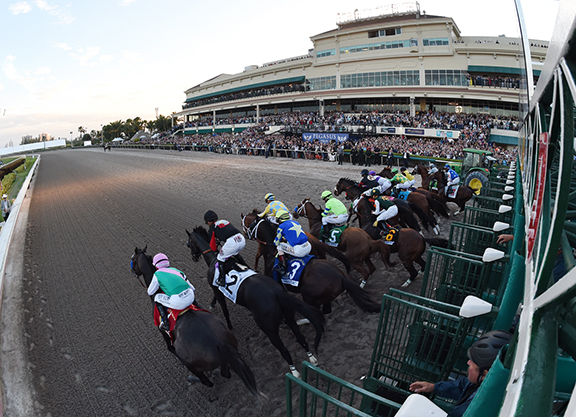 The initial three editions of the GI Pegasus World Cup (PWC) are in the books. What’s the score so far?

Purely from a “How good was the race?” standpoint, all three editions have rated fairly highly.

The 2018 version drew the top four finishers from the GI Breeders’ Cup Classic that was run two months prior, and Horse of the Year Gun Runner (Candy Ride {Arg}) asserted his dominance in stylish fashion.

Saturday’s race was headlined by the sort of top-level match we rarely get to see anymore in America: Emphatic winners of two Breeders’ Cup races at two different distances (one mile and 1 1/4 miles) meeting at “middle ground” over nine furlongs.

And when City of Light (Quality Road), the GI Breeders’ Cup Dirt Mile winner, was confronted by GI Breeders’ Cup Classic champ Accelerate (Lookin At Lucky) on the far turn, their highly anticipated hookup lasted only for a few strides because Accelerate was being scrubbed on for run while City of Light glided off the turn effortlessly, relishing the sloppy conditions while leaving the rest of the competition 5 3/4 lengths behind in his wake.

From a “Was it worth it to all participants?” standpoint, the PWC remains an open financial question that is bound to undergo some tweaking.

The starting-berth fee was sliced in half this year from $1 million to $500,000, but it is unclear how many also-ran participants in the unique profit-sharing model of the PWC made money on the deal, which was a major concern among owners in previous editions. TDN attempted on Sunday to contact Tim Ritvo, The Stronach Group (TSG)’s chief operating officer, but had no luck getting an interview.

Did the fans come out on top on PWC day at Gulfstream? I guess that depends upon one’s perspective. I’m leery of any big day in horse racing featuring jacked-up prices ($60 for general admission, with escalated price points for premium seating). Gulfstream is not optimized for frontside race viewing under normal big-day circumstances; Saturday’s downpours made the situation even more challenging.

But the event is endeavoring to take on a distinctly “Miami” flavor, and that champagne-and-glitz aspect of the PWC does seem to be working. Such an atmosphere might not make for a traditionalist’s idea of an ideal day at the races, but if that concept is going to work anywhere in the sport, Gulfstream Park seems the most logical venue to pull it off.

Next year’s Super Bowl will be staged in Miami Feb. 2. It will be interesting to see what sort of tie-ins the 2020 PWC will have with the biggest sporting event in America.

Will the PWC continue to exist in its current late-January time slot? Or will it nudge even closer to the traditional start of the Thoroughbred breeding season with a day-before-the-Super Bowl time slot that would take full advantage of the influx of celebrities and media that will descend upon the region?

This year’s edition of the PWC played out against the backdrop of a bitter family lawsuit filed in Ontario that essentially pits lead plaintiff Frank Stronach, the TSG’s founder and honorary chairman, against his daughter, Belinda Stronach, the company’s chairman and president.

Portraying himself as the 86-year-old family patriarch who is allegedly being forced out of control by the 52-year-old daughter he once entrusted with the family’s wealth and legacy, Frank Stronach filed the initial salvo with a $540 million (CDN) lawsuit that sought Belinda’s ouster from the company back in October (read it here).

Belinda Stronach didn’t immediately file a statement of defense during the 30-day time frame that is customary in Canadian courts. Instead, she opted to wait more that 3 1/2 months to answer the allegations.

But after waiting that long, why did she choose the Monday before the PWC–five days prior to her firm’s signature horse race–to publicly file her defense, which includes a countersuit (read it here)?

Now that the claim and counter-claim are public documents, one gets the sense that–like in most family arguments–there is a little bit of truth to both sides of the issue, and a whole lot of haziness in the middle.

It would be easy to write off this sort of lawsuit as a spat among extremely well-off family members. Frank’s wife, son, and grandchildren are also involved at various levels, and Belinda’s countersuit assures the court that despite the strife, all of the Stronachs “have been able to live in a manner that reflects the family’s substantial wealth.”

But considering TSG’s substantial holdings within the United States (six racetracks, including two of the nation’s premier venues, Gulfstream and Santa Anita), people involved in racing from coast to coast are understandably antsy about what the lawsuit might mean for the future of those tracks.

Frank Stronach has alleged that his daughter had engaged in “covert and unlawful actions,” and her brother, Andrew Stronach, alleged in a separate lawsuit that TSG is currently embroiled in a “liquidity crisis.”

In response, some financial reassurance arrived last week in the form of TSG figures that Belinda Stronach (and the other defendants) disclosed in Jan. 21 court filings, which stated that “TSG’s most profitable and cash-generating business segment is currently racing and gaming” and that the racing and gaming segment “is currently the primary source of TSG’s growth and driver of wealth creation.”

But on a personal level, in order to prove her point that she has committed no unlawful conduct and that she is running TSG in a fiscally responsible manner, Belinda Stronach has little choice in her legal filings other than to paint her father as a past-his-prime entrepreneur whose “fanciful schemes” have cost the family empire more than $850 million (CDN).

As one business column in Canada’s leading daily newspaper, The Globe and Mail, put it last week, “Mr. Stronach’s legacy is likely to be determined by a family fight over a series of unprofitable ventures…. Outside of auto parts and real estate, it’s not a pretty picture. Legal documents [portray] Mr. Stronach as an entrepreneur who got lucky once, then lost his touch and refuses to admit it…. The gloves are now off, [and] in this slugfest, Frank Stronach’s hard-won reputation as a business visionary is already taking serious hits.”

And within the racing world, there is also this to consider: You might think he’s a genius, or you might think some of his outlandish ideas have been downright kooky. But there’s no denying that Frank Stronach is/was one of the sport’s biggest benefactors over the last several decades, unafraid to toss out bold ideas and put his own money behind them, while at the same time being very active in charitable endeavors.

Take a look at the increasingly corporate landscape of racetrack operators. Do you see anyone currently at the helm of a racing conglomerate who is likely to step up and assert themselves similarly? Outspoken, charismatic, willing-to-bet-on-it individuals with a solid track record of putting racing first are an endangered species within our industry right now.

An Ontario judge will likely have the final say in how the acrimonious Stronach family lawsuit gets decided. But the game might start missing Frank Stronach before his court outcome even goes official.

Accepting Responsibility at the Regulatory Level

We’re not even a month into 2019 yet, but California Horse Racing Board (CHRB) vice-chairman Madeline Auerbach already gets my vote for the best cut-to-the-chase comment delivered by a racing regulator at a public meting.

Last Thursday, the CHRB began the important process of establishing concussion protocols for the protection of jockeys and exercise riders. Part of the talk focused on the difficulty of implementing safety rules that sound good at the discussion stage, but that might cause unintended logistical problems once those standards go into effect.

This is the type of “damned if we do, damned if we don’t” scenario that racing commissions face all across the country. And although Auerbach’s opinion was specific to concussion protocols, it also articulated a more general sensibility that other regulators should keep in mind when tasked with tough decisions.

“We’re grownups here. And we are commissioners. And this is our job,” Auerbach said. “And if we can’t take a little flak, then we shouldn’t be here.”