Home » Archive » Shared News » The Week in Review: Why Jerry Bailey is No Fan of the Whip

The Week in Review: Why Jerry Bailey is No Fan of the Whip 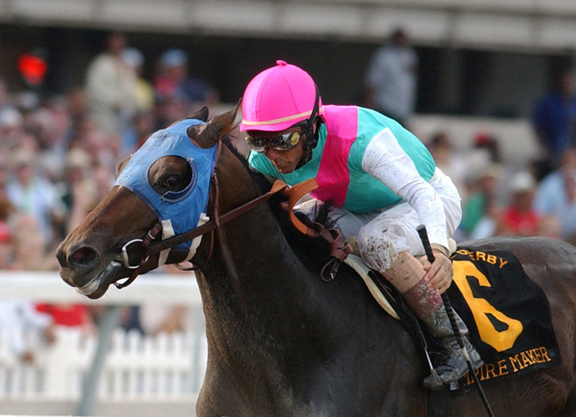 The whip issue, which never seems to go away, was front and center last week as the California Horse Racing Board (CHRB) approved language that would severely limit the use of the riding crop. Under the new rules, horses can be hit on the shoulders and hindquarters, no more than two times in a row without waiting for a response and no more than six times total.

That led the Jockeys' Guild to issue a stinging press release that expressed its displeasure with the new rules, calling them “unsafe” and arguing that they “jeopardize the integrity of the sport.” The Guild also called the decision typical of a sport that “has a long history of disrespect for jockeys, going back many, many decades.”

Hall of Fame jockey Jerry Bailey no longer has a dog in this fight. Though a former president of the Jockeys' Guild, he's been retired since 2006. But his opinion should matter. Not only did he ride in over 30,000 races, but, as an analyst on NBC's racing broadcasts, he has been able to take a step back and observe racing from something other than an insider's view. Trying his best to understands all sides of the issue, he keeps landing in the same place. Bailey doesn't agree with his former colleagues. He says racing would be better off if whips were not allowed.

Bailey agrees with the current riders when they say the new padded whips don't hurt the horses, but he says the issue is bigger than that. What Bailey sees now, but couldn't when he was riding, is a sport that has a difficult time explaining to the public why whips are necessary.

“I have heard from many people outside the sport and they say that if those horses really love to run like you say they do, then why do you whip them?” Bailey said. “That's what I hear. I am not talking about core fans, but many people,  people who watch five or six races a year, tell me they find it offensive that horses are being whipped. Are they right or wrong? I don't know. But that's what they think and how they feel.”

Bailey said that racing is losing out on the opportunity to cultivate new fans because of the whip.

“If we can do away with the whip and that leads to drawing in fans who are now offended by it, that's a small price to pay,” he said.

Whips have been part of racing since the beginning because it is assumed that their use can make the horse try harder and run faster. Bailey says that just isn't the case.

“I have said for probably seven or eight years now, that only a very small percentage of horses run faster when hit,” he said. “It only works on a very few. Most horses give you all they have without hitting them. I don't think the times of races would change much if you didn't have whips. If everybody were on a level playing field, I don't think a significant number of horses would be at a disadvantage. I think you would do fine without them.”

The Guild's chief complaint with efforts to take the whip out of racing is the safety factor. Riders say the sport becomes more dangerous without the whip. “We will continue to fight for the livelihoods and safety for our members and the betterment of our sport,” the Guild said in its statement.

Again, Bailey does not agree.

“I feel the reins are the best tool to keep your horse straight,” Bailey said. “Absolutely and without a doubt, the reins are your steering mechanism, not your whip. There are jockeys who feel you need the whip as a safety device. If a horse is out of control and is going to go over one fence or another or go over a pack of heels in a race, the whip is not going to help you. You need to use the reins in that case. The reins are the tools to use and in my opinion the whip is not going to do you much good.”

CHRB Executive Director Scott Cheney is on record saying he would like to see California eventually go to whip-less racing and that the new rules are a first step in that direction. Bailey said interim steps like the one taken by the CHRB make it hard for jockeys to follow the rules. Why not just do away with the whip all together?

“Things happen really fast and bang-bang decisions are made out there,” he said.  “It's hard for a jockey to know whether he has hit the horse six times or eight times or if he has raised his shoulder high enough. If you took whips away completely, you can't break rules on how many times you have hit them. That's why I think they should just take them away.”

An Ugly Story in Venezuela

The Associated Press reported Friday on a tragic story in Venezuela, where a stallion named Ocean Bay was stolen and killed for its meat.  According to the AP, the theft of horses in the country is a growing problem because economic conditions have made food hard to come by for the poorest citizens.

“What a disgrace,” his trainer Ramon Garcia wrote on Twitter.”This isn't the Venezuela that I grew up in.”

The horse went missing Monday. Three months earlier, seven other Thoroughbreds had been stolen and slaughtered.

Many eyes will be on Delaware Park Wednesday as the track will reopen after being shut for the coronavirus. The track will be the first in the Northeast to be able to race in front of fans. The track has not yet announced what safety protocols will be in place for racing fans. At Delaware Park's casino they have installed cameras that can detect if a patron has a fever. And every casino employee will have to pass a test showing they are COVID-19 free before being allowed to work.

The measures in place at Delaware could be used as a template for other tracks in the region looking to allow fans back in the stands.