The Week in Review: Time to Bring Back Down-the-Hill Turf Sprints at Santa Anita 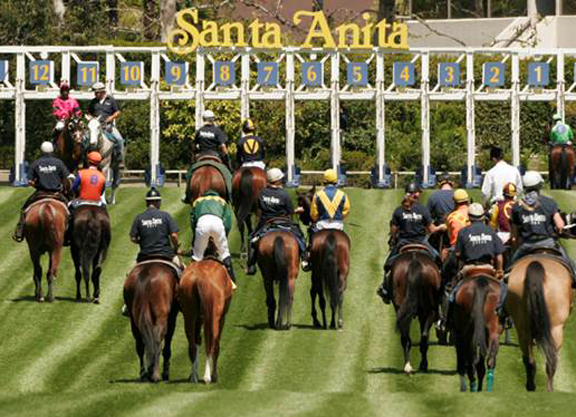 There was a rare and welcome sight Saturday at Santa Anita when the field of five scampered across the down-the-hill turf course to begin the 1 1/2-mile GIII San Luis Rey S. There were no incidents in a perfectly clean race where no one was hurt. So why can't the course also be used for what were iconic 6 1/2-furlong downhill grass races?

They haven't carded a turf sprint on that course since a horse named Arms Runner (Overdriven) broke down and had to be euthanized in the running of the GIII San Simeon S. Mar. 31, 2019. La Sardane (Fr) (Kingsala) fell over Arms Runner, but was not seriously injured. The accident came at the height of the controversy that swirled over Santa Anita at a time when an unusually high number of horses had broken down. There was nothing to suggest that the downhill races were more dangerous than normal races, but management was in a position where it couldn't afford to take any chances.

The future of these races looked bleak when Santa Anita recently installed a chute on the main course that can accommodate six and 6 1/2-furlong grass races. But it appears that the races, a favorite of fans, gamblers and horsemen, will be back soon. The Stronach Group Chief Operating Officer Aidan Butler said management is close to giving the green light for a return of the downhill sprints.

“We've always wanted to bring them back,” Butler said. “I've gone on the record a couple of times talking about how special those races are. I get a text at least every other day from a trainer or owner informing me of why it was such a stupid idea to end those races. I am really hopeful we will be getting them back at some point.”

In the nearly two years since the 2019 San Simeon, The Stronach Group has looked at the data and found that the downhill races were just as safe as normal races.

“We are all comfortable that those races are as safe as any races,” Butler said. “When the race was last run there was a pretty nasty spill. We were a little gun shy. We've been on a good run on safety. Now, it's just a matter of timing. When we feel the perfect time has come, we'll start running them again. It would be a nice option to be able to run those races again and I think we will when every single one of us is comfortable with it.”

Caution is fine, but sometimes you can be too cautious. These races can't come back soon enough.

Another Strong Showing From a California Shipper

The California-based 3-year-olds lost a star Saturday when it was announced that Life Is Good (Into Mischief) had suffered what appears to be a minor injury that will keep him out of the GI Runhappy Santa Anita Derby and the GI Kentucky Derby. He has a small chip in his left hind ankle and will undergo surgery on Friday at the Rood & Riddle clinic in Kentucky.

(How would you like to own some of those tickets on Life Is Good in the Derby Future at 2-1? Worst bet ever).

But even with that loss, the California group is deep and very well could win another Derby.

A week after Santa Anita shippers Concert Tour (Street Sense) and Hozier (Pioneerof the Nile) ran one-two in the GII Rebel S., the West was best again when Hot Rod Charlie (Oxbow) won the GII Twinspires.com Louisiana Derby Saturday at Fair Grounds. On paper, he looked no better than the third or fourth best colt in California, but had no problem defeating a solid group of opponents. Showing more speed than normal, he led most of the way on his way to a two-length win.

On Saturday, the Baffert-trained Spielberg (Union Rags) will try to give the Californians another out-of-town win in the GI Curlin Florida Derby.

Largely because of Bob Baffert, the California group has had a nice run in Louisville. Five of the last seven Derbies have been won by California-based trainers. That may soon be six of the last eight.

The Problem With Whipping Penalties

Jockey Robby Albarado was handed a three-day suspension last week by the Santa Anita stewards for violating the whipping rules when riding Swiss Skydiver (Daredevil) in the GI Beholder Mile. Albarado hit his mount just once, but when he did so, he used the traditional overhanded method, which is no longer allowed in California. On the same day that the Albarado suspension came out, Flavien Prat was fined $500 for whip violations and Juan Hernandez was handed a $1,000 fine.

With the fines and suspensions, the stewards are obviously trying to deter riders from violating the whipping rules, which, in California, are the most restrictive in the nation. But they may be fighting a losing battle. In some races, the incentive to use the whip is just too great.

Take the case of Albarado. Being that he is someone who rarely rides in California, it's possible that he was unaware of the rule. Or it could have been a matter of weighing the punishment versus the crime. The Beholder Mile was a Grade I race and the winner's share of the purse was $180,000. That means that a victory put $18,000 in Albarado's pocket. If Albarado, or any jockey, feels they need to go to the whip in order to secure a victory, what's stopping them from doing so?  There's just too much temptation to go to the whip when that may mean the difference between a win and a loss. At least that's the case when the likely fine or suspension amounts to a minor penalty or a few hundred dollars and the stewards have shown no signs of disqualifying a horse because of the way it was whipped.

Would a jockey locked in battle in the GI Breeders' Cup Classic, where a win means about $400,000 for the rider, really put away his whip in the stretch over concerns of a three-day suspension or a $1,000 fine? That's hard to imagine.

Short of taking the whips away from the riders all together, which isn't going to happen any time soon, there is this inherent flaw in the system and no easy answers as for how to deal with it.