Home » Archive » Shared News » The Week in Review: The Day That Jack Christopher and Flightline Stole the Show

The Week in Review: The Day That Jack Christopher and Flightline Stole the Show 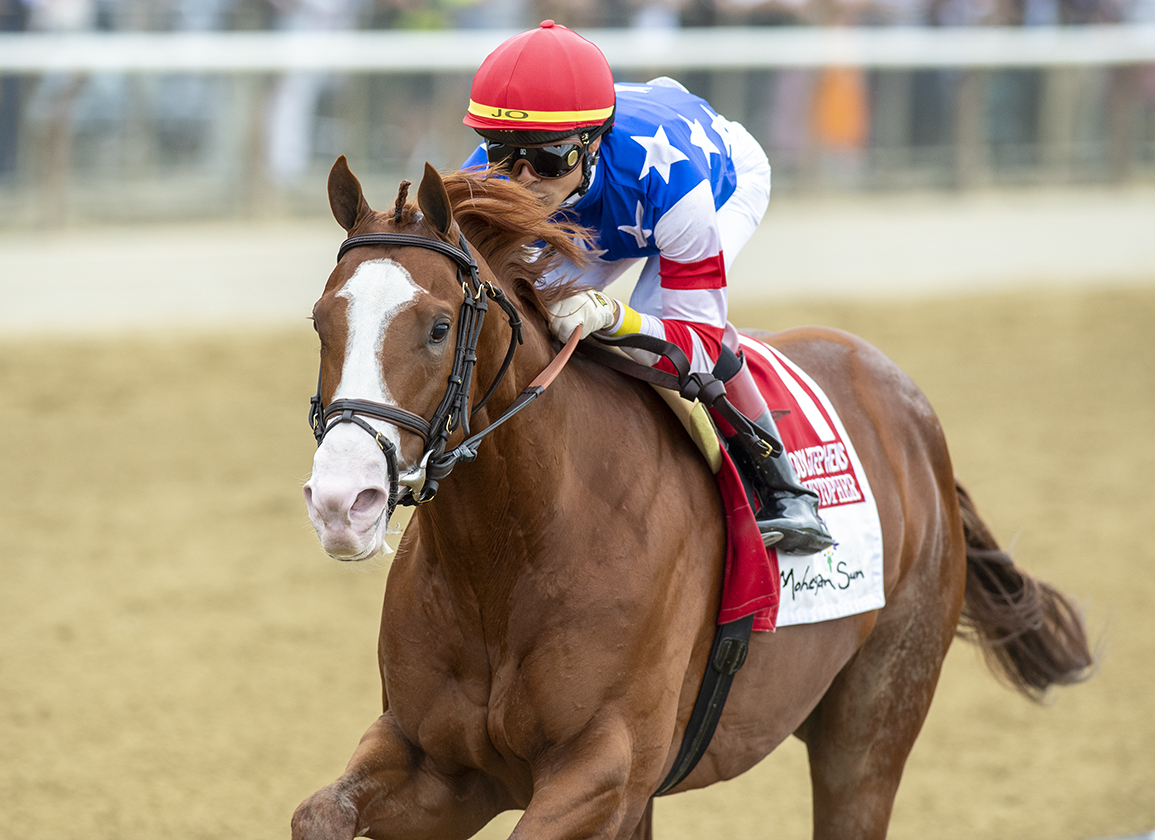 After winning the GII Remsen S. and the GII Wood Memorial S. and running a credible fifth in the GI Kentucky Derby, Mo Donegal (Uncle Mo) put it all together on Saturday. He was the decisive winner of the GI Belmont S. to give New Yorker Mike Repole a one-two finish in the final leg of the Triple Crown at his home track. It was a good story and a good performance from a very good horse.

It was not, however, the highlight of the day.

It's hard to overshadow a Triple Crown race, but that's exactly what happened Saturday at Belmont Park, where we saw a pair of performances from two special horses that are freakishly fast and talented. It's rare when horses can live up to the hype, but Flightline (Tapit) and Jack Christopher (Munnings) didn't meet expectations, they shattered them. These are superstars.

As impressive as Flightline had been in his first three starts, he came into the GI Hill 'n' Dale Metropolitan H. with something to prove. He had won the GI Runhappy Malibu S., but that was against 3-year-olds and at seven furlongs. The Met was an entirely differently story. Though there were just five horses in the field, the competition included GI Breeders' Cup Sprint winner Aloha West (Hard Spun), GI Jockey Club Gold Cup winner Happy Saver (Super Saver) and the hottest horse on the East Coast, GI Carter H. winner Speaker's Corner (Street Sense).

It was going to be the first true test of his brief career and the test became even more daunting when he broke a step slow. That kept him from getting the lead, which was where jockey Flavien Prat wanted his horse to be. Riding the rail, Prat tried to squeeze past Speaker's Corner but it didn't work. Flightline had to regroup, take back and come around Speaker's Corner. None of it mattered. He swept past a fading Speaker's Corner on the turn and proceeded to gallop away from the field to win by six lengths over Happy Saver. He's not just good, he's tenacious.

While it may seem sacrilegious to say that a horse who has only run four times is among the best horses we've ever seen, in the case of Flightline, it doesn't seem like a stretch. That's how dominant he's been and how fast he has run. Horses that can do what he can do come around once in a decade, if even that.

How good is Jack Christopher? We still don't know.

He showed a tremendous amount of potential when winning the GI Champagne S. last year but a shin problem kept him out of the GI Breeders' Cup Juvenile. He had to have surgery, so he was not ready for the Triple Crown races. Instead, trainer Chad Brown took his time and had Jack Christopher ready for the GII Pat Day Mile on Derby Day. He won the Pat Day Mile by 3 3/4 lengths and was arguably the best 3-year-old to perform that day at Churchill Downs.

Not ready to go a 1 1/2 miles, Jack Christopher bypassed the Belmont and was sent to the GI Woody Stephens S. at seven furlongs. As good as he had been in his three prior starts, it was the Woody Stephens where he made a statement. He won by 10 lengths and earned a 107 Beyer, nine points higher than the number given to Mo Donegal. Once again, he was the best 3-year-old to perform on the card.

The Belmont is the unofficial ending of the first half of the season and the second half figures to include some of the best races we have seen in some time.

As for the 3-year-olds, it's been hard to define who's the best of the group since so many horses ducked one or more of the Triple Crown races. Starting with the GI Haskell S., which is expected to attract Jack Christopher, that should change. This year, the Haskell, the GII Jim Dandy S., the GI Runhappy Travers S. and the GI Pennsylvania Derby may turn out to be more important than the Triple Crown races. You might just get a race that includes some combination of Jack Christopher, Rich Strike (Keen Ice), Early Voting (Gun Runner), Mo Donegal and the division's unluckiest horse, Epicenter (Not This Time).

It's not clear yet where Flightline will run next. The GI Whitney H. at 1 1/8 miles seems like the perfect spot but after the Belmont, co-owner Kostas Hronis mentioned the GI Pacific Classic at 1 1/4 miles when asked about Flightline's next race.  Considering that he's by Tapit and probably better suited to those distances and two-turn races than what he has been running in, there's every chance he might even get better. It's a scary thought.

The older-horse division also includes Life Is Good (Into Mischief), who looked so good when winning the GI Pegasus World Cup, where he thrashed Horse of the Year Knicks Go (Paynter). After running fourth in the G1 Dubai World Cup, he's scheduled to come back in the July 2 GII John A. Nerud S. at Belmont before going in the Whitney. And don't forget about Country Grammer (Tonalist), the winner of the Dubai World Cup. He'll resurface soon.

A lot can happen between now and the Breeders' Cup Classic and the key for every horse is that they have to stay healthy. But there's a chance that the Classic could include Flightline, Jack Christopher, Life Is Good, Country Grammer, Rich Strike, Early Voting, Mo Donegal, Epicenter and a bunch of other really good horses. Let's hope so. It could be one of the best fields ever assembled.

While it's nice to see a “little guy” like trainer Eric Reed win the Kentucky Derby, the reality is that the “super trainers” have become more dominant than ever. The very best horses in the sport are concentrated in the hands of just a few trainers, which is not a good thing.

The top four trainers in the nation in terms of earnings combined to win seven of the nine graded stakes run Saturday at Belmont.  Steve Asmussen, who is first, won the GI Ogden Phipps S. with Clairiere (Curlin). Chad Brown, who is second, won the GI Woody Stephens with Jack Christopher, the GI Just A Game S. with Regal Glory (Animal Kingdom) and the GI Manhattan S. with Tribhuvan (Fr) (Toronado {Ire}). Pletcher, who is third, won the Belmont and the Brooklyn S. with Fearless (Ghostzapper). Fourth-place holder Brad Cox won the GI Acorn S. with Matareya (Pioneerof the Nile).

Mike Maker, who is fifth in the earnings standings, did not have a Belmont day winner. Bill Mott, who is sixth, did. He won the GI Jaipur S. with Casa Creed (Jimmy Creed). John Sadler, who is the trainer of Flightline and is 19th in the standings, was the only trainer not among the top six in earnings to win a stakes race. Brown, Asmussen and Cox also won graded stakes Friday at Belmont.