Home » Archive » Shared News » The Week in Review: Strange Year for 3-Year-Olds Gets Even Weirder

The Week in Review: Strange Year for 3-Year-Olds Gets Even Weirder 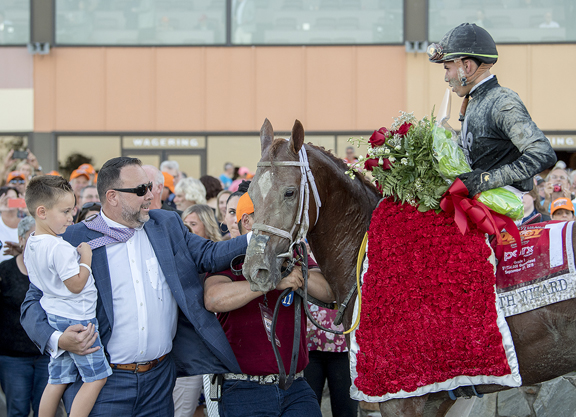 Just 12 days before this current crop of 3-year-olds would graduate from its juvenile year, a $16,000 maiden-claiming race at Gulfstream turned into the key race of 2018. It was won by Maximum Security (New Year’s Day) and the third-place finisher was Math Wizard (Algorithms), the winner of Saturday’s GI Pennsylvania Derby. Two Grade I winners coming out of a $16,000 maiden claimer has assuredly never happened before and will never happen again, but it foreshadowed what was to become a very strange year for the 3-year-old male division.

With the GI Pennsylvania Derby, the last two-turn dirt race on the year restricted to 3-year-olds, having now been run, the division is a bigger mess than ever.

Perhaps it was fitting that Math Wizard won the race because he fit the narrative. He was claimed for $25,000, a race he won by 18 1/2 lengths,  Jan. 31 by trainer Saffie Joseph, Jr. Joseph has a knack for improving horses off the claim and Math Wizard did get better. But he had lost six straight and came into the Pennsylvania Derby off an 11 3/4-length defeat in the GIII West Virginia Derby. He was beaten in that race by Mr. Money (Goldencents), who he would face again in the Pennsylvania Derby.

It was very hard to make a case for him on paper, but he swooped down the middle of the track to edge Mr. Money at the wire by a neck at odds of 31-1.

“It was a priceless feeling,” Joseph said. “Everyone should have that feeling. Once you get that feeling, it makes you want to keep going more and more. I was proud for the horse, the way he performed. On his best day, if you looked at it, he was capable, but if he had run third or fourth, I would have been happy.”

That’s how the Grade I’s for 3-year-old ended. They began with Maximum Security, the other $16,000 maiden claimer romping in the GI Florida Derby. Despite his humble beginnings, he looked like a future star, especially after he crossed the wire in front in the Derby. You know the rest of the story. The disqualification, the first ever of a Derby “winner” for interfering with other horses. The controversy. The lawsuits.

Maximum Security did not show up for the GI Preakness S. or GI Belmont S., so maybe the horse that was placed first in the Derby, Country House (Lookin at Lucky) should take control of the division. Problem is, he hasn’t run since.

The focus turned to War of Will (War Front) when he won the Preakness. After all, he was the horse that was bothered the most by Maximum Security in the Derby. Unlike Country House, he has kept plugging away, but has never won another race. The Pennsylvania Derby was his fourth straight defeat.

The Belmont went to Sir Winston (Awesome Again). A horse that seemed to have woken up in his previous start, the GIII Peter Pan S., maybe he would be the one. Not so fast. He, too, has yet to run back.

Just when you were ready to give up on the whole bunch of them, Maximum Security resurfaced. After a stunning defeat in the Pegasus S. he won the GI Haskell Invitational. He was on the right track, but only for a minute or two. Trainer Jason Servis planned to run him in the GI Travers S., but said he didn’t like the way the horse was training up to the race. Then he was actually entered in the Pennsylvania Derby, but was scratched due to what his veterinarian said was a displaced colon. It’s doubtful that he will run again this year.

As for other Grade I winners, Omaha Beach (War Front) looked like the Derby favorite after winning the GI Arkansas Derby, but was also put on the sidelines following that race and is only now ready to come back. Roadster (Quality Road) won the GI Santa Anita Derby, finished 16th in the Derby and has been seen only once since, in a second-place finish in the GIII Affirmed S. in June.

There’s one last hope, Code of Honor (Noble Mission {GB}). Brought along cautiously by trainer Shug McGaughey, he was a clear-cut winner of the Travers and will now go in the GI Jockey Club Gold Cup. With a Gold Cup win, he will likely jump to number one on everybody’s list of top 3-year-olds. That might not be fair to Maximum Security, the only horse among the group to win two Grade I’s, which doesn’t include the Derby, but he’s a victim of being out of sight out of mind.

Code of Honor should run well in the Gold Cup, but maybe not. He could finish seventh and the race will be won by a 78-1 shot. That’s the kind of year it has been.

Guarana Not Invincible After All

The Chad Brown-trained Guarana (Ghostzapper) came into Saturday’s GI Cotillion S. at Parx with a reputation as a budding superstar. Her victory over GI Kentucky Oaks winner Serengeti Empress (Aletrnation) in the GI Acorn S. in just her second career start was nothing short of sensational. She followed that up with a win over a good horse in Point of Honor (Curlin) in the GI Coaching Club American Oaks. It looked like she could sew up the 3-year-old filly championship with a win in the Cotillion, but she was second best to Street Band (Istan).

Perhaps we had it wrong all along, that Guarana isn’t the best 3-year-old filly in the country, she’s not even the best in her own barn.

Dunbar Road (Quality Road) has been overshadowed by Guarana, even though that filly is coming off wins in the GII Mother Goose S. and the GI Alabama S. She will go next in the GI Spinster S. and a win there could mean that she, and not Guarana, will win the divisional championship. The problem there is she will have to beat the top older mare Elate (Medaglia d’Oro), which will be a tall order. And both of Brown’s fillies, should they go onto to the GI Breeders’ Cup Distaff, will have to face, not only Elate, but divisional leader Midnight Bisou (Midnight Lute).

The Latest From Chicago

No one really knows what is going to happen to Arlington Park and Chicago racing now that Churchill Downs has stunningly turned down a license to have slot machines and table games at Arlington. Churchill has committed to racing only through the 2021 season.

Incensed by the decision, the Illinois Racing Board has threatened to not grant Arlington a license to run in 2020. I don’t see how that helps anyone.

With Hawthorne busy building a casino of its own and also committed to run harness racing dates, they can’t fill the complete void left by Arlington. Should Arlington not run next year that would only exacerbate Illinois racing’s problems and give horsemen ever fewer option as to where to run.

Plus, Churchill, as everyone knows is a gaming first, racing second, company. Track officials have had very little to say about the Arlington situation, but I doubt they would shed any tears should they not have to open next year.

Illinois Governor J.B Pritzker said the move was “a significant reversal” on the legislation he shepherded, which he said was designed to allow “the racing industry to flourish.” So, obviously he’s not pleased either.

It is the Illinois Gaming Board that runs casinos in Illinois, while the IRB has nothing to do with them. If Pritzker is truly that annoyed with Churchill, which owns the highly successful Rivers Casino not far from Arlington, perhaps he can let it be known that he will instruct the Illinois Gaming Board to make life as difficult as possible on Churchill if they do not change their minds about Arlington. This is not problem that can easily fixed.

Riding regularly in the U.S. since 2014, Sophie Doyle picked up her first Grade I win aboard Street Band in the Cotillion. I’m sure her younger brother, James, was quite proud. James is a regular rider for the Godolphin operation in Europe and has 107 group wins to his credit, including two wins in the Sussex S., two wins in the Prince of Wales’s, two win in the St. James’s Palace S. and a victory in the King George VI and Queen Elizabeth S.