Home » Archive » Shared News » The Week in Review: Sparks of Brightness Amid the Winter Solstice

The Week in Review: Sparks of Brightness Amid the Winter Solstice 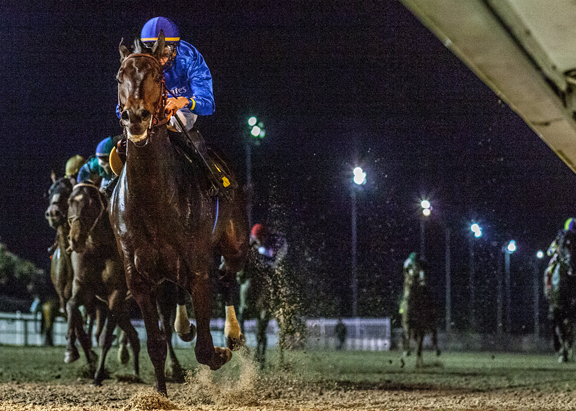 Leave it to one of the darkest days of the year to deliver two glimmering equine efforts that could combust into shining stars for the 2021 racing season.

On the cusp of the winter solstice, breakout races book-ended the Saturday Fair Grounds card. One was a smart, step-wise progression by a juvenile colt in a NW2L allowance who now has credible GI Kentucky Derby aspirations. The other was an admirably impressive comeback by a still-undefeated 3-year-old whose own chance at the 2020 Derby got derailed by injuries and untimely setbacks.

Both horses are campaigned by Godolphin, which is off to a rip-roaring start at the three-week-old New Orleans meet with a 7-1-5 record and $233,740 in earnings from just 17 starts through Saturday's racing.

Proxy (Tapit) ably made the jump from the maiden-winning ranks to Derby relevancy in the first race Dec. 19. Even though his second lifetime two-turn win came against a short field, don't hold that against him, as each one of the three rivals gave the Godolphin homebred a serious challenge.

Proxy brushed the gate at the break, recovered well, and emerged confidently from between horses to assume command onto the backstretch. The chart doesn't show it, but he conceded the top spot between calls, giving up the rail and the lead to an eager pace prompter.

Proxy re-engaged and swatted away that foe at the entrance to the final bend, then braced for a tag-team attack from the two stretch-running colts who had been held in abeyance.

All four horses were within a length of one another three-sixteenths from the wire, and Proxy drifted out three times under left-handed pressure. He appeared to intimidate an outside rival, but being in close quarters only emboldened Proxy, and when asked for another level of torque in deep stretch he dug in and responded, opening up to win by 2 1/4 lengths at 7-10 odds for trainer Michael Stidham and jockey Angel Suarez.

Although Proxy's final time of 1:45.56 was not stellar (76 Beyer Speed Figure), his effort impressed more from a “how he did it” perspective rather than “how fast.”

Godolphin purchased Panty Raid for $2.5 million at the 2008 Fasig-Tipton November sale, and she most notably produced the Stidham-trained Micheline (Bernardini), who earlier this year was a MSW and GISP Godolphin filly who set a course record for 1 5/16 miles in a $500,000 grass stakes at Kentucky Downs.

Proxy, it should be noted, has raced on Lasix for both of his Fair Grounds wins after running second, beaten a neck, without it in his Monmouth Park debut. He'll have to ditch the Lasix in order to stamp himself as a top-tier Derby candidate, because this year's edition (and the major points-earning Derby prep races) will be conducted without that anti-bleeding drug.

If the passage of nearly seven months since his last start made you forget what a sleek and athletically gifted equine specimen he is, the dark bay's presence in this relatively modest $75,000 nightcap would soon snap you back to those long, warm days of spring, when “Max” was ranked as high as third on the TDN Derby Top 12 and was last seen professionally dismantling a pretty decent field in the GIII Matt Winn S. even though he was not fully cranked for a prime effort that day.

Depending on which prism you choose to view him through, Maxfield is either the most unlucky four-for-four racehorse on the planet right now or the luckiest.

On the unlucky side, recall that Max unleashed the most visually impressive juvenile stakes effort of 2019 when he ransacked the GI Claiborne Breeders' Futurity field at Keeneland that October. He loomed as one of the favorites for the GI Breeders' Cup Juvenile, but was forced to scratch the week of the race, and underwent ankle chip surgery in November that kept him sidelined until mid-winter.

Godolphin tasked trainer Brendan Walsh with mapping out a slow but steady 2020 comeback for Max. But just when he appeared poised to resurface in the entries, the pandemic hit, halting most racing and knocking the Triple Crown schedule askew.

Yet a few weeks later, this timing change appeared to work in Maxfield's favor, because that May 23 Winn score would allow the homebred time for a summer prep race or two prior to the rescheduled Sept. 5 Derby.

But on June 10, Maxfield suffered a non-displaced condylar fracture in his right front leg while breezing a half-mile at Keeneland. Godolphin immediately issued a press release saying that it was looking forward to a 2021 campaign after the colt healed. But that prospect was hardly etched in stone.

So the fact that Max persevered through yet another long-haul rehab has to be considered the lucky part. The icing on the cake is that he thrived in Saturday's comeback, and we still have yet to see his all-out best.

Shadowing the speed, the 1-2 favorite cut an intimidating presence while in stalk mode sitting second for most of an untroubled trip, and watching Max inch forward with metronomic precision down the backstretch gave the impression that he could have inhaled the frontrunner at will.

But jockey Florent Geroux instead waited until five-sixteenths out to cue his colt to quicken, with Max coming over the top at the three-sixteenths pole. He was hand-urged and not overly extended to win by 2 1/2 measured lengths in 1:43.35 (98 Beyer).

“I'm relieved,” Walsh said post-race. “It's nice to get him back [to racing] and have him run so well. He was working so well going into it, you're just looking for confirmation. He gave us what we needed to see…. He was a little fresh, so maybe he was a little more aggressive than normal. I don't think he's a deep closer by any means. He's a stronger horse this year and I think we can ride him more prominently.”