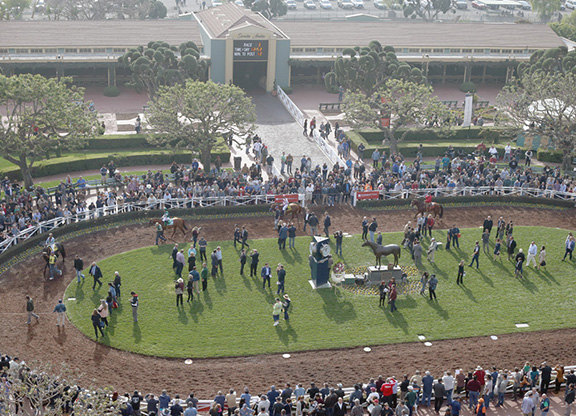 In the end, and after all the meetings, discussions and rancor, Lasix has in fact been banned at Santa Anita. Sort of, that is.

Neither side, the horsemen nor The Stronach Group (TSG) got exactly what they wanted when a final agreement between the two groups was announced Saturday concerning the use of Lasix. TSG wanted an immediate ban on all race-day medications and the horsemen did not want to lose Lasix. Period. To the credit of both sides, they reached a compromise that called for the maximum amount of Lasix allowed to be halved from 10 cc to 5 and, starting with the crop of 2018, those horses and all future crops, will not be able to race with Lasix. There is a “grandfather clause” that will allow current Lasix users to continue to use the medication throughout the rest of their careers.

So, it's going to take some time, but by 2024 or so, racing at Santa Anita will, basically, be completely Lasix-free.

No matter which side of the argument you are on, all should agree that the new Santa Anita rules will finally give the sport the answer it has been looking for ever since the drug arrived on the scene in the seventies: does racing need Lasix or not?

When it comes to Lasix, no one is in the middle or neutral. You either believe it is a vital therapeutic drug that horses need to keep them from bleeding and that without it a vast amount of horses would be unable to compete or compete effectively. Or you believe it is an unnecessary performance-enhancing drug, is what has led to the modern era horse running so infrequently and is an embarrassment considering that virtually every other country in the world seems to have no problem conducting its racing without it. All that and it gives animal rights activists ammunition to paint horse racing as a cruel sport in which the competitors are pumped up with dangerous drugs.

So, which is it? All along, that's been one of the major problems concerning a controversy that has dragged on for 40-some years. Would horse racing be better off without Lasix or not?

The proof will not be in the pudding, but at what happens at Santa Anita, and perhaps the other TSG-owned tracks, over the next few years.

As someone who has never been a fan of Lasix and does not understand how the sport got by without it for 150 years or so and how every other country does just fine without it, here's what I think will happen:

The California trainers, most of whom have never trained at a time when Lasix was not allowed, will adjust. Just like their predecessors did in the sixties and every other decade before that, they will find that most of their horses can do just fine without Lasix. As for the bleeders, trainers will need to figure out new methods that will allow them to race effectively. If they have serious bleeders that simply cannot do without Lasix, those horses probably shouldn't be racing anyway.

Since I am neither a trainer nor a veterinarian, I am not exactly an expert on the subject, but I still, for the life of me, cannot understand how dehydrating a horse before they go out to race, is a good idea….especially on a hot day. Remember, Lasix is not an anti-bleeding drug per se, it is a diuretic and its primary effect is to causes horses to urinate to the point where they lose a large amount of water weight. While there may be some advantage to that when racing, as the horse should be able to run faster when it suddenly loses 75, 100 pounds., there's little doubt that it makes it much harder for them to recover from a race. There's a direct correlation between the legalization of Lasix and the plummeting numbers when it comes to the amount of starts horses average each year. Will the new rules lead to the end of the mind set where horses need five to six weeks off between races and won't owners be thrilled to see their horses now running 12 or 13 times a year and therefore earning far more money?

I fully realize I could be completely wrong, that the doomsday prophesy espoused by the most vitriolic pro-Lasix trainers could come true. We may well see smaller fields because a lot of California horses need the drug and we may well see more incidents of horses bleeding during races. Trainer Peter Miller told the TDN that it is “inhumane” to run a bleeder without Lasix. It could be that, when it comes to Lasix, racing in the 1960s cannot be compared to racing in 2019. There are environmental factors to consider and horses are no longer bred to be tough and sturdy and go a mile-and-a-half, but to be very fast and precocious and more prone to bleed. Those are valid points.

But with Lasix being phased out, the answers are not far away. And there should not be any gray areas. We will know everything we need to know.

If racing thrives under the Santa Anita experiment, or even if it merely continues on without any problems, then it will be time for horsemen's groups across the country to admit defeat and give up their insistence on keeping the drug legal. I'm not sure horsemen realize how serious a threat the animal-rights community is to horse racing. It has brought down dog racing and you'd have to be very naive to think that it can't do the same to horse racing. Obviously Lasix is not the boogeyman and directly responsible for the recent deaths of 22 horses at Santa Anita, but that's not the point. This is a case of where perception is vastly more important than reality and the racing industry needs to show PETA et. al. that it is doing everything it can to make the sport as safe as it possibly can be.

If things go haywire at Santa Anita without Lasix, then it will be time for the hay, oats and water crowd to admit it was wrong, that the sport cannot do without the drug and it must be brought back to protect the livelihood of trainers and owners and, perhaps, keep horses from suffering dangerous bleeding issues during racing.

Everyone needs to keep an open mind and when all the evidence is in and base their opinions not on what is right for them but for the good of horse racing.

TSG Needs to Walk the Walk

The Stronach Group and Stronach Stable Inc. fall under the same umbrella, and the Stronach racing division continues to use Lasix with the majority of its horses. Example: Saturday at Laurel, the Stronachs ran two horses, Lion Lord (Bernardini) and Unbridled Juan (Unbridled's Song). Both ran on Lasix. And even better example came in the GI Pegasus World Cup Turf. The Stronachs ran Delta Prince (Street Cry {Ire}) on Lasix even though there was a condition in the race whereby a horse got a seven-pound break in the weights if running without the drug. You want Lasix out of the sport? Lead by example. All Stronach horses should stop racing on Lasix immediately.

Crop of 2018 Will Be at a Disadvantage

Compromises are never perfect and often lead to unforseen problems. This one is no different. When the crop of 2018 is racing against one another Lasix-free next year at Santa Anita, it will be a fair playing field. But a year later, those same horses will have to race Lasix-free in races for 3 year-olds and older, against horses allowed to use Lasix. It's pretty well-established that Lasix “moves horses up.” Imagine being a 3-year-old having to run in the GI Breeders' Cup Classic without Lasix against 4- and 5-year-olds who are allowed to use the drug. Major edge to the older horses and an unfair playing field.

There are a lot of problems in racing that cannot be easily solved. The whip was never one of them. It has always been hard to explain to people that Thoroughbreds love to run…so we need to hit them to get them to do so. It doesn't matter if the crops are cushioned. It doesn't matter if it hurts or not. What matters is that the sight of a field of horses running down the stretch being hit by people with sticks is a major turnoff to a generation paying double for cage-free eggs and free-range beef. Congratulations to The Stronach Group for fixing a major image issue in the sport with the stroke of a pen.

We Still Don't Know What Caused the Fatalities at Santa Anita

When racing resumes at Santa Anita Mar. 29, the spotlight, from both the racing press and the mainstream media, will be shining brightly. As the edicts announced by TSG and the fight over Lasix have taken away attention from the rash of breakdowns, they are still the real issue. What has caused so many horses to die this meet at Santa Anita? Two of the most renowned experts in their fields have said the racing surface is perfect. And no one who knows anything really thinks that Lasix was causing these horses to break down. All of which means we still have no idea what has been going on. Perhaps, it will forever remain a mystery, but everyone who loves this sport and derives their livelihoods from it had better pray that the breakdowns stop. If they don't, it's going to be lost that TSG enacted so many new safety protocols and attempted to ban Lasix. The media will continue to blare the ugly message that animals are dying out at Santa Anita. Nothing could be more destructive to the very future of the sport, not just in California but throughout the country, than that.

PETA, disappointed that Lasix was not completely banned, has already issued a dire warning. “If one more horse dies, there will be blood on the owners' hands and hell to pay,” it said in a press release issued Saturday night. Take these people lightly at your own risk.