Home » Archive » Shared News » The Week in Review: Nest Belongs in the Travers

The Week in Review: Nest Belongs in the Travers 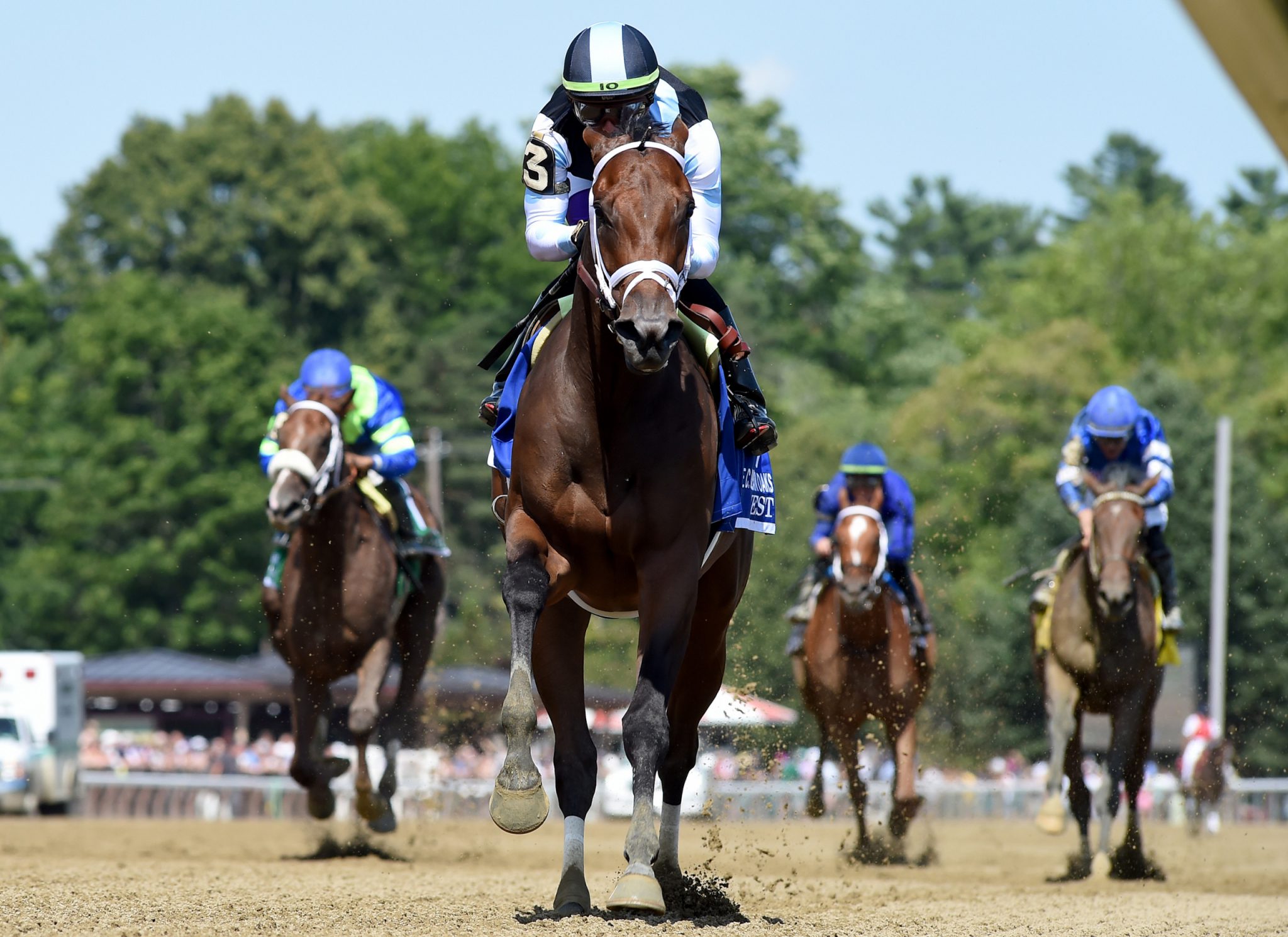 For Nest (Curlin), the easy route to the Breeders' Cup includes a stop in the GI Alabama Aug 20. It's a prestigious race, has a $600,000 purse and Nest would be an odds-on favorite against many of the same horses she thrashed Saturday in the GI Coaching Club American Oaks. But what fun is that?

Owners Mike Repole, Michael House and Eclipse Thoroughbred Partners and trainer Todd Pletcher have already shown that they will think outside the box. They ran their filly in the GI Belmont S., where she finished second despite stumbling and getting bumped at the start. It was a huge effort and proved that she can handle herself if thrown into the mix with the sport's best 3-year-old males.

Yet, there had to be a sense of disappointment that she ran so well but lost. Now, there is a chance to make amends, one that could put Nest into the conversation when it comes to the Horse-of-the-Year picture. There's a race out there where she could make history and it's not the Alabama. Nest should go in the GI Travers S.

It's a race the connections will consider.

“We're leaning towards [the Alabama],” Pletcher said Sunday. “I had a brief conversation [with her owners] though and we did not completely rule out the Travers. She showed she can hold her own against [males] and we know the mile and a quarter suits her. So, we'll keep it in the back of our mind. I'd say all things being equal, we'll probably see her in the Alabama.”

The Travers is the right call. For one, she can win it. She got a 104 Beyer for winning the CCA Oaks, two points better than the number Cyberknife (Gun Runner) received for winning the GI Haskell S. on the same day. Among those eyeing the Travers, only her stablemate, Charge It (Tapit), who got a 111 Beyer when winning he GIII Dwyer S., is notably faster. Nest is in the same range as all the other top colts.

And, yes, the Travers will be a very tough race, but it got a lot easier Saturday when Jack Christopher (Munnings) finished a tiring third in the Haskell, all but cementing his status as a horse that wants no part of 1 1/4 miles. The race has also lost Mo Donegal (Uncle Mo), who beat Nest in the Belmont but has since been sidelined.

This has become a sport where there are few chance-takers and the sportsmen have given way to the businessmen. But there remain some out there who get it, that it doesn't always have to be about the money and that you can't put a price on challenging yourself and doing something special. Get Nest to the Travers winner's circle and you have done something that will stamp her as one of the greatest fillies of her generation. In modern times, no filly has won the Travers. Seven fillies have won the race but none since Lady Rotha in 1915. That's 107 years.

It will take a special filly to erase 107 years of history and owners and a trainer who understand the historical significance of pulling off such a feat. In Nest, Repole, Eclipse, House and Pletcher we may just have that combination. For them, winning the Alabama would fall under the category of “just another race.” The Travers would be so much more.

Fixed odds wagering may some day become a big part of how people bet on the sport, but the slow progress the concept is making is frustrating. It remains available only on Monmouth Park races and only to on-track customers at Monmouth.

Just imagine, though, for a minute, what might have happened last week had fixed odds bets have been available and had they been available to sports betting customers through their on-line wagering accounts.

The Wednesday following the MLB All-Star game is the single slowest day of the year for sports betting. When it comes to the four major sports, nothing is available. It's normally the only day of the year when that is the case.

There's a huge void and maybe some day racing can fill it and fill it in a way that can expose the sport to hundreds of thousands of sports bettors craving action on a Wednesday. But that can't happen until much more progress is made, starting with the advent of fixed odds and getting the product available on sports betting websites. This is something everyone needs to get behind.

The New York Gaming Commission came out last week with a press release crowing about how Juan Vazquez has beeen banned from running horses in the state through Jan. 26, 2025. That's sort of like announcing that today is Sunday.

The New York regulators did nothing other than honor the reciprocity agreement that exists among all horse racing states and has been around forever. Vazquez was suspended by the Pennsylvania Racing Commission, so New York, and everyone else, had no choice but to honor the suspension. There was absolutely no need to tell everyone that New York was honoring the suspension and by doing so it looks like the New York commission was looking to take credit for something it had absolutely nothing to do with.

Because the Pennsylvania suspension did not take effect until a few days after it was announced, Vazquez was able to run six horses in Saratoga after it was announced that he had received the lengthy suspension after the Pennsylvania regulators alleged that a horse he shipped from Belmont to Parx arrived in such bad shape with a severe case of laminitis that it had to be put down. The Pennsylvania stewards said his actions were “grossly negligent, cruel and abusive,” yet there he was running in Saratoga. That's a terrible optic.

If the New York Gaming Commission really wanted to do something about Vazquez, it should have taken steps to keep him from running in Saratoga.

So, Jack Christopher is not a two-turn, mile-and-an-eighth horse. At least he sure didn't look line one in the Haskell. But that doesn't mean he still can't have a sensational ending to his 3-year-old campaign. He's still a very fast horse. Trainer Chad Brown can now look to races like the GI Allen Jerkens Memorial and, maybe, the GI Breeders' Cup Sprint, where we could see what could be a scintillating  showdown between Jack Christopher and Jackie's Warrior (Maclean's Music).

“We tried!,” began a tweet Saturday from Liz Crow, who purchased the colt for his owners. “Jack Christopher doesn't want nine furlongs. Cut him back to one turn and we will enjoy the ride from there.”