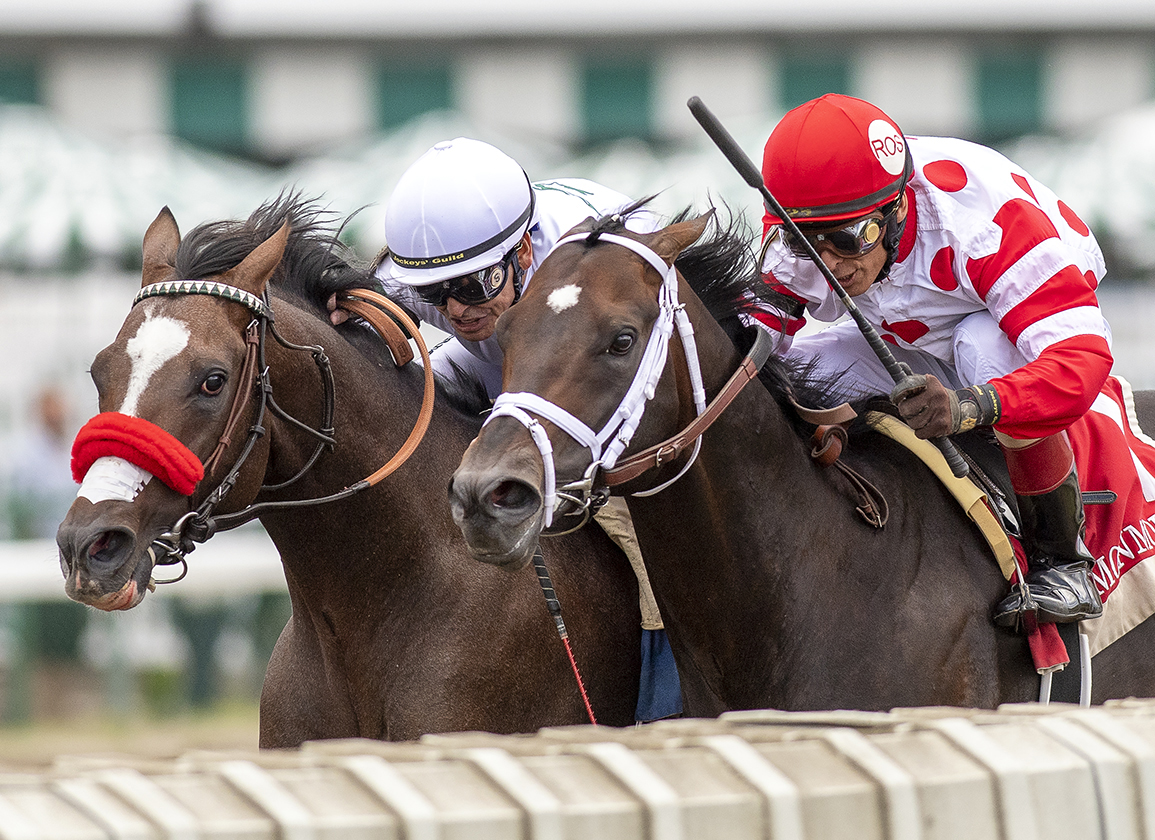 When the late John Brunetti Sr., the colorful and sometimes controversial owner of Hialeah Park and the Red Oak Stable breeding and racing operation, died at 87 in 2018, his racing manager, Rick Sacco, told TDN, “He's been active right up until the very end [and] this is probably Mr. Brunetti's best crop of homebred 2-year-olds that we've ever had.”

The standout from that Red Oak foaling class of '16 ended up being GISW Mind Control (Stay Thirsty), who at age six edged up over the $1.5 million earnings mark Saturday.

Brunetti never got to see Mind Control's debut or his evolution into a no-quit, middle-distance grinder, most recently evidenced by his refuse-to-lose smackdown of 3-10 favorite Hot Rod Charlie in the GIII Salvator Mile S. at Monmouth Park.

But a third generation of Brunettis, led by sons Steven and John Jr., are charting a path with Mind Control that could carry the Red Oak silks (in partnership with Madaket Stables) to the winner's circle in the GI Breeders' Cup Dirt Mile.

Mind Control broke his maiden at Monmouth in his second try on Aug. 12, 2018, then wired the GI Hopeful S. at Saratoga at 10-1 odds in start number three.

A trip-troubled seventh in the GI Breeders' Cup Juvenile going 1 1/16 miles seemed to stamp him as a one-turn type, and he picked off some lower-level stakes at a mile or under in New York before springing another 10-1 upset going seven furlongs at the Spa, this time in the 2019 edition of the GI H. Allen Jerkins S.

After starting 2020 with a pair of Grade III sprint victories, Mind Control went 0-for-8 over the next 12 months before Red Oak executed a trainer change, from Rick Sacco's brother, Greg Sacco, to Todd Pletcher. The move was not without some family friction for the Saccos, according to published reports at the time.

Reunited with John Velazquez, who had piloted Mind Control to his pair of Grade I wins, the 5-year-old scored at first placement for Pletcher in the GII John Nerud S. at Belmont Park July 4, 2021, then ran a credible fourth in the GI Forego S. at Saratoga.

By that point late last summer, there were enough known qualities about Mind Control to establish that he belonged in the upper tier of middle-distance horses in America. Adjectives like sound, smart, tenacious, determined, professional, hard-working, and unafraid to fight aptly described him.

But Mind Control was often perceived as if he still had something left to prove. Bettors rarely fancied him. Even now, with 26 starts under his belt, he's only gone off favored five times in his career, and not once has he been the chalk in his last 14 starts, extending back more than two years.

A sizable stumbling block last summer was that Mind Control was essentially caught between distances when it came to a Breeders' Cup try. Six furlongs in the GI Sprint seemed too short (despite a 2-for-4 career record), and stretching beyond his sweet spot of seven furlongs (5-for-15) in the Dirt Mile meant going around two turns for just the second time in his life.

Yet because Mind Control had won and finished second in his only two one-turn-mile attempts at Aqueduct back in 2019, the distance itself didn't seem to be out of his grasp.

To gauge his affinity for two turns, Red Oak and Pletcher tried Mind Control in the Sept. 25, 2021, Parx Dirt Mile. That experiment appeared over soon after the break. Mind Control had a stutter-step start, got caught wide around both bends, and shortly after he made a far-turn, last-gasp move that reeled in the two leaders, he was immediately pounced upon by 4-5 fave Silver State (Hard Spun).

Under a full head of steam, Silver State extended his lead to nearly a full length inside the sixteenth pole and appeared home free. But Mind Control, pinned down inside, re-rallied and clawed his way back to win by a furious head bob over the final 50 yards. The result was a 104 Beyer Speed Figure–his first foray into triple digits after thrice peaking at 99.

A fever knocked Mind Control out of last year's Dirt Mile at Del Mar, and he spent the winter recuperating at Red Oak's farm in Ocala, where he annually enjoys his own paddock.

Starting fresh in '22, Mind Control had the misfortune of hooking two razor-sharp winners in a pair of seven-furlong races, both of whom were building three-race winning streaks in stakes.

On Apr. 9, he was third behind the odds-on Speaker's Corner in the GI Carter H. at Aqueduct. Then on the GI Kentucky Derby undercard, Mind Control was a no-match fifth for the '21 sprint champ Jackie's Warrior (Maclean's Music) in the GI Churchill Downs S.

A confidence-builder was in order, and the Salvator Mile at the Jersey shore figured to offer a touch of class relief.

But Mind Control's day at the beach got party-crashed at entry time by Hot Rod Charlie, whose connections had also sized up the Salvator Mile as a potentially cushy spot coming off his runner-up try in the G1 Dubai World Cup three months ago.

Third in last year's Derby and second in the GI Belmont S., Hot Rod Charlie would also be returning to the scene of his controversial GI Haskell S. disqualification from last summer, thickening the plot.

Mind Control broke sharply from the rail under Johnny V. and was immediately accosted by a keen Hot Rod Charlie. But after establishing early positioning near the head of affairs, Mike Smith opted to back off with his heavy favorite, sitting second while keeping Mind Control well within striking sight, maintaining a cushion of about 1 3/4 lengths down the back straight behind measured splits of :23.60 and :23.06 for the first two opening quarters.

At the midpoint of the race, Smith attempted to reengage with Hot Rod Charlie, but Mind Control didn't need much more that a subtle flick of the wrists from Velazquez to open back up, this time by three-quarters of a length.

But by the far turn Velazquez was hand-riding with a bit more urgency while Smith had yet to even think about unleashing Hot Rod Charlie, and the favorite clearly had better momentum as the dueling duo crested the quarter pole.

Moving on the outside, Hot Rod Charlie asserted himself at the eighth pole, finally wresting away the lead.

Then the scene shifted.

Reminiscent of his Lazarus-like clawback when in tight at the rail in deep stretch in the Parx Mile, Mind Control responded to Johnny V.'s unpanicked urging, incrementally edging back on even terms even while Hot Rod Charlie continued to roll homeward without any quit on his account.

They head-bobbed together while hurtling home in lockstep through the final sixteenth, with Mind Control prevailing in 1:35.79.

Just like in the Parx Mile, Mind Control's winning margin was a head. By the numbers, the result was the same too–another 104 Beyer.

Not a bad effort for a horse allegedly out of his element around two turns.

Maybe it was the public that was in need of the confidence booster, not Mind Control.