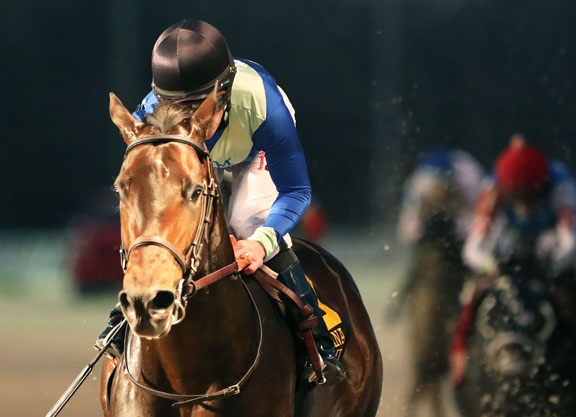 There's never been a GI Kentucky Derby contender quite like No Parole (Violence), who stayed undefeated when winning Saturday's Premier Night Prince S. at Delta Downs. He may not be the best 3-year-old in the country, but he is certainly the most intriguing. How good is he? It's impossible to tell.

His route to the Derby has included a maiden race, an allowance race and the Prince, all races against fellow Louisiana-breds. Normally, anyone winning those races wouldn't register on anyone's radar, but this horse is different. The 'TDN Rising Star' won his first two races by a combined 27 1/2 lengths and then scored a ridiculously easy win in the Prince by 6 1/2 lengths. Owned by Maggi Moss, he's been so dominant and impressive in each of his races that it's hard not to get excited.

“His temperament is great,” trainer Tom Amoss said. “He has that gifted athleticism and we've seen how that is so important in the Derby preps and in the Derby. I'm really excited to see what he does. He deserves the chance to see what he can do in one of these preps.”

No Parole's first two wins came at six furlongs and Amoss was anxious to see what he would do when stretched out to a mile and around two turns in the Delta Downs race. Against the level of competition he was facing, No Parole, who went off at odds of 1-20, didn't get much of a test. But the distance was obviously not a problem. Ridden by James Graham, he went right to the front and was allowed to coast on the lead through fractions of :49.39 and 1:14.38. Graham let him run a little bit down the lane before wrapping up on his mount late.

The only negative was that he didn't run particularly fast. The final time of 1:39.93 was good enough for a Beyer Figure of only 79. Amoss was quick to dismiss the number.

“When you talk about race set up, we were able to control things early on and slow the pace down quite a bit,” he said. “The rider's job is to give the horse the best chance to win. So I don't want to hear about this speed figure or that speed figure right now because you are not taking into account how the race developed. I'm more interested in how did my horse do it and did he have the ability to quicken going that far. The answer is yes. He did it and did it well. That's exciting.”

No Parole ran a 90 Beyer in his first start and an 87 in his second. Those figures put him more in the neighborhood of a Derby contender, but they, too, are open to further examination. Whenever a horse is winning by such a wide margin against such inferior competition, they are rarely asked for their very best.

What is No Parole's best? Amoss doesn't know. But the answer will come soon enough. Amoss knows that it is time to test his horse against open company in a traditional Derby prep.

“We will look at one, possibly two, races over the next month-and-a-half and make a decision whether he is a legitimate Kentucky Derby horse or not,” he said.

Amoss said he hasn't picked which race will be next for No Parole, but said the Mar. 14 GII Rebel S. at Oaklawn is a possibility. That's the same race that Bob Baffert has mentioned as a possible start for the much-hyped Nadal (Blame), the winner of Sunday's GII San Vicente S. at Santa Anita.

The fillies may take a back seat to the colts this time of year, but the field for the GI Kentucky Oaks is shaping up to be as good, perhaps, as any that has ever raced in the sport's biggest race for 3-year-old fillies.

Going into the weekend, the known commodities were Eclipse Award winner British Idiom (Flashback), the very exciting Taraz (Into Mischief), Finite (Munnings) and Bast (Uncle Mo), the winner of three Grade I races.

Now, there's Venetian Harbor (Munnings). In her second career start and her first on dirt, she broke her maiden by 10 3/4 lengths. Stretching out from six furlongs to a mile, she returned in Saturday's GII Las Virgenes S. and drew off to win by 9 1/4 lengths. Bob Baffert finished second and third with Gingham (Quality Road) and Stellar Sound (Tapit), respectively.

“When you have the speed my filly has and can carry it, it's kind of like having Songbird,” trainer Richie Baltas said. “I'm not saying she's the next Songbird, but they are the kind that horses start chasing and they can never catch up. It's pretty freaky how she ran. California speed is a lot better than people give it credit for. You are running here against Bob Baffert and he's got the strongest young horses of anybody in the country. He has by far, hands down, the best horses in the country.”

Baltas wasn't sure where Venetian Harbor would wind up next, but said the Apr. 4 GII Santa Anita Oaks was a possibility.

Pennsylvania Tracks Must Focus on Betting

Lost amid the uproar over the Governor of Pennsylvania's attempt to empty out the Race Horse Development Fund was the poor record of the state's tracks when it comes to building up handle. The takeout rate in the state has always been excessive and that's one of the main reasons the tracks handle so little and why they are so dependent on slot revenues. Eighty-eight percent of the purse money in Pennsylvania comes from the slots.

“Besides selling programs and hot dogs and sodas and having a spectacle here, we sell bets. If we don't sell enough bets, we're not going to be able to pay for a lot of what we do here,” Pennsylvania Thoroughbred Horsemen's Association (PTHA)  President Sal DeBunda told racing writer Dick Jerardi. “Over the years, we've tried to find more and more ways to sell more bets. We've been working with the frontside and we've finally come to an agreement that we're going to try something different. We're going to lower the takeout on some of the bets that are made here in hopes that will attract more bettors to Parx races rather than other jurisdictions.”

The takeout reduction at Parx should be a first step. The rate is still way too high and puts racing at a competitive disadvantage versus other forms of gambling.

As this situation has reminded us, the politicians can take away casino funds any time they want. They can't take away racing's share of handle. With its back against the wall, Pennsylvania racing needs to bolster the handle. Let the same state that has been the poster child for excessive takeout structures now lead the way by slashing the take and giving the bettor the type of fair shake that is so hard to find at the racetrack.

From the XFL, a Lesson on Transparency

The reboot of the XFL received positive reviews from most Monday morning quarterbacks, many of which liked the various innovations the football league had implemented. The list includes allowing the television viewer to hear and watch the replay officials discuss a controversial or potentially missed call.  The process is 100% transparent as the replay officials discuss what they saw, watch replays of the play in question and then come to a conclusion about the play. The viewer at home is also treated to live discussions between the coaches and players.

What does this have to do with horse racing? Plenty. It shows that the XFL gets it, that the consumer wants full transparency and doesn't want to feel like they have been kept in the dark, particularly when gambling is involved. The football replay booth is much like the stewards' booth at the track. Except, that is, that the majority of stewards make their decisions about possible disqualifications in private and aren't required to issue the betting public an explanation. Never was this more apparent than in last year's Kentucky Derby, when everyone was put on hold while the Churchill Downs stewards debated the race. Things went from bad to worse when the stewards came out to meet the media and issued a bland statement without taking any questions. It was a debacle.

Let the public hear what is being said among the stewards. Make the stewards come on closed circuit television after a race in which there was an inquiry or an objection and explain why they did what they did. The secretive nature of these rulings doesn't do anyone any good.