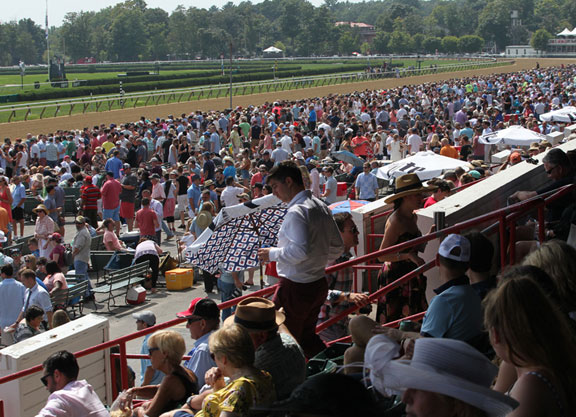 The grandstand at Saratoga, where schedule changes are afoot for this year’s meet | Horsephotos

Even though the calendar officially says there are two weeks to go until the midpoint of the year, the middle of June is the traditional halfway mark of the North American racing season. The Triple Crown is in the books, Saratoga and Del Mar are a few weeks away, and the long days of June mean every regional circuit is in action (37 separate Thoroughbred race meets were going on this past Saturday).

One interesting aspect of 2019 that’s getting overlooked in the headlines is the subtle shifting of the overall racing calendar. We rarely see major changes from year to year, but there is a bit of continental drift going on right now.

Oaklawn Park this year extended its race meet into May for the first time, adding three weeks after the GI Arkansas Derby while shedding some non-desirable January dates and providing direct competition to portions of the Keeneland and Churchill Downs spring meets.

Saratoga will be opening earlier than ever, on July 11. The first week of the season will feature four dates of racing; closing week will have six (winding up on Labor Day as in recent seasons), and the weeks in between will all feature five-day weeks, with Mondays now joining traditionally dark Tuesdays. This preserves the meet’s 40-day structure, and in theory provides a minimally-disruptive path toward elongating the Spa’s season while (again, theoretically) making it easier to card improved day-to-day racing.

Ellis Park, while not substantially shifting race dates (June 30 through Labor Day), will attempt to emerge as a stronger summer competitor thanks to a horsemen-approved purse transfer agreement funded by Kentucky Downs gaming revenue that will peg average daily purses at $330,000 (up from $230,000 last year and more than double what horses ran for at Ellis four years ago). Maiden special weight races will be worth $50,000 for the 29-day meet, and while that’s not Saratoga or Del Mar-type money, it’s enticed trainer Mark Casse to send a string of 25 horses to Ellis for the first time in more than 25 years.

“We’re going to have our smallest contingent at Saratoga that we’ve had,” Casse said. “We’re just going to focus more on Kentucky.”

In the mid-Atlantic region, after six years of closure, Colonial Downs will re-emerge under new management, armed for the first time with historical horse racing-fueled purses.

The Virginia track’s signature outsized turf course (that in previous years accounted for nearly 90% of the races carded at the track) will be the main attraction for 15 dates in 2019, spanning Aug. 8-Sept. 7. But Colonial management indicated upon taking control of the track last year that it has aspirations to double that number of race dates to 30 in 2020.

One scenario that Colonial officials discussed last year involves a meet that potentially opens in late September, after Kentucky Downs, Monmouth Park, and the turf-centric meet at Meadowlands. If that happens in 2020, Colonial could be at the second-highest purse level nationally in the early October time slot, behind only Keeneland. It would also be a geographically-convenient stopping point for horses migrating from the Northeast to Florida for the winter.

And while all of the above changes are examples of tweaking the national racing landscape by addition, it’s also worth noting that there is significant subtraction going on, with a pair of circuit-anchoring tracks on each coast sliding off the grid.

In Oregon, Portland Meadows, which dates to 1946, has already run its final races. The track, previously a stronghold in the Pacific Northwest, is in the process of being sold by The Stronach Group. The property will be developed into a warehousing/shipping center.

Oregon does host a fairly decent five-stop summer fairs circuit, and one of those tracks, Grants Pass Downs, has secured licensure to take over as the state’s surviving commercial race meet by scheduling a second Sept. 22-Nov. 4 season that bookends the nine-date meet going on right now.

But Grants Pass is way down in the southern tier of the state, some 250 miles from Portland and the bulk of Oregon’s population. In terms of maintaining the sport’s fan base in the region, the closure of Portland Meadows will have longer-term adverse implications that won’t be fully felt for a few years.

In Massachusetts, my hometown track, Suffolk Downs, will cease live racing after a grand finale weekend June 29-30. The hardscrabble East Boston oval has had more comebacks than Lazarus during its historic 84-year run, leading some grizzled local racegoers to deny that the end truly is near. But several ominous, building-sized piles of landfill dirt that are being stockpiled in the track’s main parking lot serve as graphic reminders that this time burial will indeed be for real–the lone remaining stop on the once-thriving New England circuit is on schedule to be razed for commercial development.

In Colonial times, New England was the horse capital of the New World. As recently as a few decades ago, the region supported commercial venues in Massachusetts, New Hampshire, Rhode Island, Maine, and Vermont, plus a robust sub-circuit of nine country fairs. That’s why it’s so inconceivable to think that New England is on the brink of becoming the most densely-populated part of the country without access to any live Thoroughbred racing.

The absence is even more glaringly magnified when you consider how greater Boston is the nation’s epicenter for colleges and universities–the demographic that our sport covets.

Tie goes to the runner(s)…

Last week marked the 75th anniversary of a racing rarity–the triple dead heat in the June 10, 1944, running of the Carter H. at Aqueduct. Not only was the three-way tie for win the first triple dead heat in an American stakes race, but it was considered a technological marvel at the time because it was just the third triple dead heat for win after the advent of the photo-finish camera in the late 1930s.

“Before the magic-eye camera’s result of the finish was posted, the crowd was divided on the winner,” the New York Daily News reported. “‘Brownie won it!’… ‘Wait a Bit won it!… ‘Aw, Bossuet won it!’ These cries shot through the crowd for 10 excitement-laden minutes. Only a few thought the ‘impossible’ had happened… a three-way dead heat. But that’s what it was.

“Confusion resulted when they flashed the payoff figures on the tote board. Brownie’s number went up first, Bossuet’s next and then Wait a Bit’s. But the tote board has only enough ‘win’ slots for a two-way dead heat and, for minutes, nobody knew what Wait a Bit’s winning price was. Then an attendant came out and hung up the third ‘win’ price in white figures.”

Another big part of the story back then was that the triple dead heat signified a once-in-a-lifetime achievement for the track official who assigned weights for the race. In the glory days of handicap racing, weight imposts were supposed to equate to a hypothetical ideal that gave all horses an equal chance at winning.

“It was the crowning triumph in the career of John B. Campbell, the portly gentleman who assigns weights to horses for all New York tracks,” the Daily News gushed. “He had been living for the day when he could turn out such a masterpiece.”

“A big part of the reasoning is a problem in formulating weight spreads,” Churchill’s racing secretary, Ben Huffman, told Daily Racing Form, which first reported the change. “I’d actually always enjoyed doing the handicaps, but jockeys’ weights have evolved to the point that most of our local riders are tacking 118 pounds or more. You really can’t assign much higher than 125, and a lot of trainers don’t want to use light riders if you assign 113 or so. It became a pretty burdensome task.”