The Week in Review: Industry Needs to Embrace Fixed-Odds Wagering 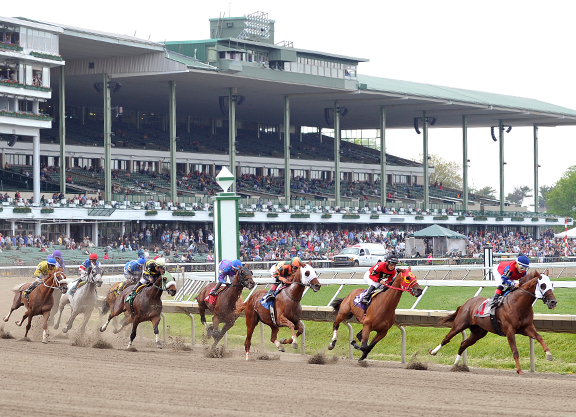 Monmouth Park announced last week that it will begin to offer fixed odds wagering starting May 7, opening day of the meet. That was the good news. The bad news was that fixed odds betting will begin with a cautious rollout and without the major players in the sport on board.

Starting Saturday, bettors on-track at Monmouth will have the choice of making traditional pari-mutuel bets or placing fixed odds wagers. Two areas of the track will be designated for fixed odds and the bets can only be made through tellers. The minimum bet will be $1. Any wager calculated to return a profit of $5,000 or more on a win bet or $2,000 or more on a place or show bet will be subject to approval. At the start, the only track available to patrons will be Monmouth Park.

It's a bit disappointing that the bets will be limited to on-track patrons at first. Without having an on-line outlet, the handle will likely be very small at first. According to Dallas Baker, who is the head of international operations for BetMakers, the Australian firm that will deliver and manage fixed odds wagering at Monmouth Park, it won't be long until New Jersey residents can bet on-line. Some regulatory hurdles need to be cleared and when they are, the on-line bookmakers in the state licensed to accept sports bets will begin to take fixed odds racing bets. There are no current plans to have traditional ADWs like TVG, Twin Spires and Xpressbet accept fixed odds bets.

Saturday, will mark an exciting development. For years, the sport has been debating the importance of fixed odds bets and whether or not it should be part of racing's future. Now, finally, it will be offered by a U.S. track on U.S. wagers and we can start to see how it all plays out and whether or not players will gravitate to the new form of wagering. Fixed odds betting has been particularly successful in Australia, where it has led to a sizeable increase in total handle, which has boosted purses, and has been the most popular form of wagering in the U.K. for decades.

Should fixed-odds betting catch on, it will go a long way toward solving what is a huge and growing problem for the sport. With the computer-assisted players dominating the pari-mutuel pools, the everyday bettor has no idea what price his or her horse is going to go off at. You might bet a horse who is 4-1 going into the gate and it gets pounded down to 2-1 at the last second. Win or lose, that leaves a very bad taste in the bettors' mouths.

While fixed odds can help with the massive problem of shifting odds, that's only one small part of the picture. Will it help to grow the sport? That's the great unknown.

To work, fixed odds wagering will have to lure some sports bettors over to racing. As things stand now, the pari-mutuel form of wagering doesn't fit into the model of on-line sports betting, but fixed odds do. If a sports bettor could place a fixed-odds wager on Mo Donegal (Uncle Mo) at +900 in the GI Kentucky Derby, that might be something they'd be inclined to do. The sports bettor is always looking for action and even obscure sports such as ping pong have attracted a surprisingly large amount of handle. Sports betting is a huge business and if racing could tap into just a sliver of the market that would mean significant gains.

“There are opportunities in front of us, specifically in sports betting, that offer us what I would term probably a once-in-a-generation opportunity,” NYRA CEO and President David O'Rourke said at last year's University of Arizona's Race Track Industry Program's Global Symposium on Racing. “Our content isn't on those platforms yet and we have the opportunity to actually do that. There's a lot of hurdles to get there. I know there's a panel on fixed odds and that's a debate, but in the end I believe, and I think our company believes, you have to give the customers what they want. We do have a great product–pari-mutuel is excellent, it's great specifically in the exotics, but there is room, I believe, for proposition bets and for this content to live side by side. And I think as these sportsbooks grow and acquire customers, that's just a huge distribution channel for us.”

O'Rourke isn't wrong, but this won't work if the product is not a good one. A different form of fixed odds betting was already tried in New Jersey, and it was a bust. Betfair, which offers exchange wagering and is wildly popular in the U.K., began in 2016. Four years later, the plug was pulled. Betfair was handling so little money that it no longer made economic sense to keep the platform operating. Betfair failed for a number of reasons, but the main problem may have been the content it offered. All of the top tracks, including the Stronach and Churchill tracks and NYRA, did not offer their signals to Betfair. What was left were tracks like Turf Paradise and Penn National. There just wasn't an appetite to bet on those smaller tracks.

So far, fixed-odds betting is saddled with the same issues. Baker said that about 15 tracks have signed up and that within a few weeks on-track players at Monmouth can also make fixed-odds bets on those signals. But BetMakers has not signed up any of the same premier tracks that Betfair never landed. That is a problem.

Baker is hoping that fixed odds will eventually prove to be so successful that tracks will come to the realization that it is something they need to be a part of.

“I'd like to think that once we start to show the model, we will prove that the sky isn't going to fall down because of fixed-odds wagering,” Baker said. “We're not expecting a miracle solution day one, to flip the switch and everything has changed. This is something that is going to take at least six to 12 months before it starts capturing the attention to the extent it needs to do before we see any great results. We hope this will speak for itself, that this is a really good solution for the racing industry. We hope the results speak for themselves and make it a no-brainer for other tracks to become involved once we can get rid of the fear factor. Once it starts speaking for itself, it will become an obvious decision for other tracks to be involved.”

Baker said that NYRA has expressed interest in selling its signal to BetMakers for fixed odds betting.

That would help, but it's going to take a lot more than that. It's understandable that tracks want to proceed slowly and let a place like Monmouth be the guinea pig. There is a possibility that fixed odds will do nothing more than siphon money out of the pari-mutuel pools and not grow the pie. That wouldn't do anyone any good.

A future sport without fixed odds and ties with on-line bookmakers is not a pretty picture, not with the way sports betting is dominating the landscape. This needs to be given a chance. And that means the top tier tracks coming on board. It means working behind the scenes to legalize fixed-odds bets throughout the country. It means looking at ways to involve the ADWs. It means taking these steps sooner rather than later.

Yes, it's still early in the game and, yes, having fixed odds betting at Monmouth is one small step in the right direction. But it's just one racetrack in one state taking bets on only one track and offering them only to those who are at the track. One would have hoped this could have hit the groung running. That hasn't happened. Hopefully, the best is yet to come.