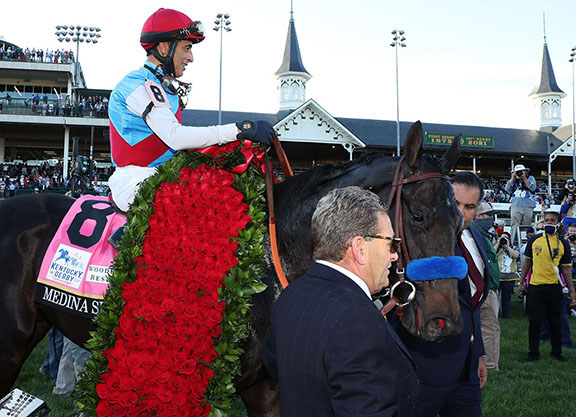 As consignor Christy Whitman remembers, it was deathly quiet when Medina Spirit (Protonico) entered the ring as a yearling at the 2019 OBS Winter Mixed sale. She seemed to be the only one paying any attention to him

“I knew he wasn't going to bring much because no one was looking at him,” she said.

A few minutes later, Medina Spirit would be hers, forever remembered as the GI Kentucky Derby winner who sold for $1,000 as a yearling.

It's the umpteenth reminder about how beautifully unpredictable this sport can be. The Derby field included horses who sold for $525,000, $725,000, $650,000, $950,000, plus a handful of beautifully bred homebreds. But these sons of super sires Tapit, Into Mischief, Curlin and others didn't have what it took to win the Kentucky Derby. A bargain-basement colt did.

One of Whitman's exercise riders, Jose Gallego, asked her to see if she could buy on his behalf an inexpensive horse that could be sold for a profit at the 2-year-old sales the following year. Whitman had a small budget and modest plans for the purchase.

“I've always been on a bit of a budget and I don't have a lot of money to spend on a horse,” she said. “I kind of have a knack for finding horses everyone else is overlooking, whether they are immature or maybe have a slight issue. I am looking for diamond-in-the-rough horses. I have honed that skill over the years because that's the only way I've been able to get horses bought.”

She realized that Medina Spirit's pedigree page was not a selling point. The sire, Protonico, who never won a Grade I race and stood at the time for $5,000, was hardly in demand. And on the dam's side you had to go back three generations before finding any blacktype. This was the first foal from a mare, Mongolian Changa (Brilliant Speed), who won one of six starts and earned just $25,970.

“He had all the things I look for,” she said. “He was really well balanced, had a really good hip and top line, was decently correct, athletic and had a good walk to him. I really liked the colt and nobody was looking at him and that was because of his page. With the mare there was pretty much no blacktype and it was her first foal. I didn't even know who Prontonico was. I had to look him up. This was a really nice colt, pretty well put together, but I knew he wasn't going to bring much because absolutely no one was looking at him.”

Whitman opened the bidding on Medina Spirit at $1,000. It was the only bid for the horse.

Gallego broke the horse and Whitman had him back in the Ocala sales ring for last year's July 2-Year-Old Sale.

Whitman was starting to believe that the $1,000 yearling had some talent, but she and Gallego stuck to their plan. Medina Spirit worked three furlongs in :33 flat prior to the sale, which, Whitman knew, would mean there would at least be some interest in him. He was bought by Gary Young, the agent for Zedan Racing Stables for $35,000.

Whitman will occasionally keep a horse and race them, but she never gave that a thought with Medina Spirit.

“If I had kept the horse and raced him, he would have never made it to the Derby,” she said. “It takes a lot of things coming together to make that happen. He's a good horse, but it is important that he wound up with a good trainer in Bob Baffert. Everything fell into place for him.”

Whitman may never again come across another horse like Medina Spirit, but she will keep trying. She looks for horses that have been overlooked for one reason or another and doesn't worry about their breeding.

“One thing I've always been adamant about is that a lot of people overlook a horse for what I would say are stupid reasons, like their page,” she said. “The horses don't know what their pedigree looks like. They don't know what you paid for them. Just because a horse has a great pedigree does not necessarily mean they are going to be a great horse. I very much go for the individual. If I like the horse I don't care about their page. It's always easier to sell a horse who is an athlete, whether it has the pedigree or not.”

It's no coincidence that Bob Baffert's two most recent Derby winners won the race in wire-to-wire fashion. Baffert and jockey John Velazquez clearly understand the importance of using early speed as a weapon in the Derby.

In five prior starts, Medina Spirit went wire to wire only once, but there he was on the lead at every call for the Derby. Of course, it didn't hurt that Rock Your World (Candy Ride {Arg}) got off to a poor start.

A year earlier, it was the same story. Authentic (Into Mischief) wasn't always on the lead in his starts prior to the 2020 Kentucky Derby. But in his Derby, he led every step of the way under Velazquez and had a relatively easy time holding off the heavy favorite Tiz the Law (Constitution).

Medina Spirit wasn't an easy horse to come up with, but at least one person from the NBC team was not fooled. Working his first-ever Kentucky Derby broadcast, Steve Kornacki nailed it and was the only one from the NBC talent pool who picked the winner.

Kornacki is best known for his work as a national correspondent for NBC News and MSNBC, but is also a long-time racing fan and horseplayer. He brought a lot of insights to the broadcast, in particular his explanation of how the $2-million-plus win bet on Essential Quality (Tapit) by Jim McIngvale affected the odds on the other horses.