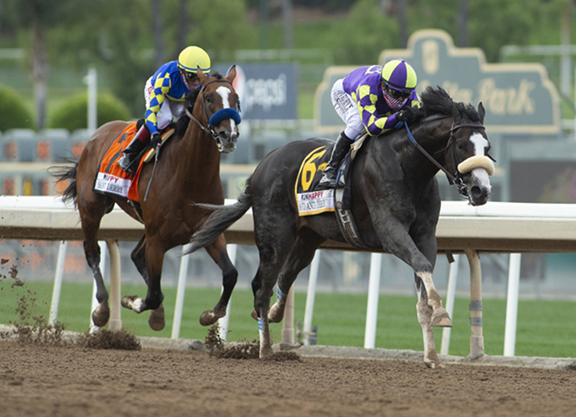 In a non-pandemic world, this column would be wrapping up the just-concluded Triple Crown, and top-level graded stakes racing in America would be going into that early-summer lull between the spring Classics and the July openings of Saratoga and Del Mar.

But this is the new normal imposed by COVID-19, and one of the post-lockdown perks it provides is that elite-level on-track action is just now starting to heat up.

And in California, a similarly styled closing kick by Honor A.P. (Honor Code) in the GI Runhappy Santa Anita Derby cemented his status as a sophomore powerhouse whose long-term potential is only eclipsed right now by his long, ground-devouring stride.

Back in Action in New York

Away since a seventh-place run in last year's Breeders' Cup Classic, Code of Honor's favored (1.25-1) comeback came amid a sudden cloudburst that rendered Belmont Park's main track muddy for the 1 1/16 miles Westchester.

The race unfolded in tactically entertaining fashion as second favorite Endorsed (Medaglia d'Oro) seized the lead assertively at the half-mile pole with a back-of-the-pack run up an open rail, while Code of Honor took the overland route, advancing methodically under his own power.

The two peeled off from the pack for their own private stretch duel, with the heart of the fight coming between the eighth and sixteenth poles, and Code of Honor edging away incrementally thereafter for a half-length win.

Although the Westchester provided the most aesthetically satisfying stakes finish of the afternoon at Belmont, it wasn't the feature on the card by graded ranking. That distinction went to the seven-furlong GI Runhappy Carter H., won emphatically by 1.65-1 favorite Vekoma (Candy Ride {Arg}), who romped by 7 1/4 lengths against a respectable field.

Vekoma is in the midst of his own comeback–he's now two races back from a 13th-place drubbing in last year's GI Kentucky Derby. Now that he's four-for-four in one-turn races, middle distances are emerging as his obvious sweet spot.

The turf stakes at Belmont on Saturday? Trainer Chad Brown absolutely dominated them.

Honor A. P. emerged from his 2 3/4-length Santa Anita Derby score as the clear West Coast kingpin in the sophomore division.

Authentic (Into Mischief), the 1-2 favorite, did himself no favors by breaking flat-footed and outward, straying about three paths to the right of his outermost starting stall before righting himself to contest the pace while parked three wide into the clubhouse turn.

Authentic sparred for a share of the lead behind a pair of longshot pacemakers while Honor A.P., the 2-1 second choice, never let him out of his striking sights for the backstretch run of the nine-furlong test, staying in the clear and well outside of horses.

As the pack tightened into the far turn, Authentic again gave up real estate, but Honor A.P. loomed even wider, commencing his bid 3 1/2 furlongs out but not truly winding up until five-sixteenths out. His four-wide sweep into the stretch put him over the top three-sixteenths from the wire, and the ridgling determinedly ramped up the pressure through the stretch while not overly extending himself.

Honor A.P.'s win is best described as a blunt-force show of power rather than a lightning-in-a-bottle display of brilliance. Like older counterpart Code of Honor on the East Coast, he is to be feared as the distances increase in future stakes engagements.

The heavy favorites delivered as expected in the 1 1/4-mile GI Hollywood Gold Cup and 1 1/16-mile GII Santa Anita Oaks. But both winners faced little in the way of serious competition in those short-field (six and four entrants, respectively) stakes.

'TDN Rising Star' Improbable (City Zip) stalked the pace and opened up at will to win the Gold Cup by 3 1/4 lengths at 1.3-1 odds.

Swiss Skydiver (Daredevil) easily wired the Oaks by four lengths at 3-5 for her third consecutive victory at her third different track. Gone are the days when you could bet her at 9-1 and 16-1, like in her previous two tallies at Gulfstream and Oaklawn.

It would be a fair question to ask whether or not we saw the GI Kentucky Derby winner on Saturday at Santa Anita. But it would be equally reasonable to wonder if that potential future superstar might not be Cezanne (Curlin), the $3.65-million Fasig-Tipton Gulfstream topper who was unveiled as a 2 1/4-length winner at 2-5 odds in a maiden special weight. He was just nominated to the Triple Crown last week at the revised second deadline for the series.

Named after the 19th-century French painter Paul Cezanne, the Bob Baffert trainee broke okay, was asked to pick up the pace to engage the frontrunners, and shifted outward to the two path soon after clearing the gap at the 6 1/2-furlong start point.

Cezanne was always in the hunt and under pressure in a four-way go for the lead through legit splits. He hit the top coming off the turn, wandered slightly outward, got a couple of right-handed reminders to stay focused, then opened up to win by a measured 2 1/4 lengths.

What's in a Name?

Watching jockeys soar through the homestretch wearing protective face masks in front of empty grandstands should be enough of a reminder that America's racetracks are operating in the midst of a pandemic. But in case you need further reinforcement that the COVID-19 crisis is a part of our social fabric, the first wave of coronavirus-related Thoroughbred names is just now hitting the entries in the form of 2-year-olds.

Herd Immunity (Union Rags) won his five-furlong debut at Santa Anita on Saturday as the 3-5 chalk. The term is a descriptor for when most of a population is immune to an infectious disease, and it's been increasingly cited as a goal for the global overcoming of COVID-19.

Last Wednesday, on the first day of the season at Belmont, juvenile colt Fauci (Malibu Moon) ran second as the beaten favorite in his first start. He's named in honor of Dr. Anthony Fauci, the director of the National Institute of Allergy and Infectious Diseases.

Self Isolation (Square Eddie) ran third on May 17 in her 2-year-old Santa Anita debut.

Social Distancing, Flatten the Curve, and No Spectators are all in the pipeline as registered names according to Associated Press, although none of those horses yet appear in the Equibase database.