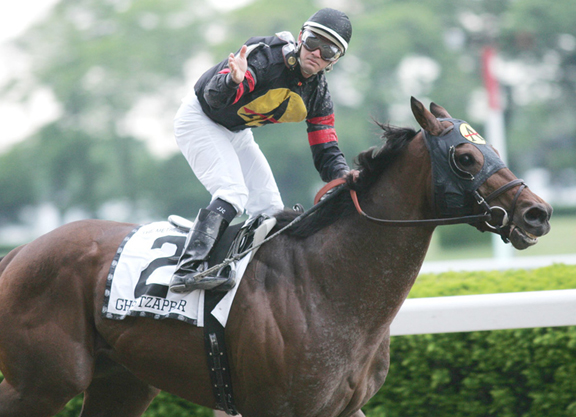 Ghostzapper winning the Met Mile on Memorial Day in 2005 | Horsephotos

Remember when Memorial Day was a big deal in horse racing?

For decades, this was the start-of-summer holiday that the sport “owned.” Traditionally, Memorial Day attendance and handle eclipsed turnouts on Independence Day and Labor Day, and a number of tracks nationwide set all-time records for those metrics on Memorial Day that still stand.

The final Monday of May (the holiday used to be May 30 before the feds gave us the three-day weekend in 1971) was known for all sorts of creative on-track giveaways and promotions. And Memorial Day in general always seemed to be a useful barometer to judge the health of the racing industry, because it featured both a long list of top-notch national stakes and solid grass-roots racing at smaller venues.

As recently as 1991, 48 North American tracks carded races on Memorial Day. This year there are 26 tracks running, a 46% reduction.

The number of Memorial Day graded stakes has also slid off the grid. This year there are only four on Monday in all of North America–a $100,000 Grade III at Golden Gate Fields and a decent trio of $500,000 Grade I races at Santa Anita Park.

At Belmont Park, where the prestigious GI Metropolitan H. for decades was the Memorial Day fixture, they now run six state-bred stakes races. In 2014, the Met Mile was moved off the holiday to the GI Belmont S. undercard as part of the practice of stacking top stakes races as supporting features on big-race Saturdays.

It pains me to write “Met Mile” and “undercard” in the same sentence, because that status doesn’t match the gravitas of the race. Everyone in the racing industry can recall a big race that got them hooked on the sport for good, and the 1990 version of the Met Mile is anchored in my mind as the most defining matchup of heavy hitters I witnessed in the formative years of my budding racetrack degeneracy.

The Met Mile is usually an intriguing race because it matches 3-year-olds against older rivals and stretch-out sprinters against proven routers cutting back to a one-turn configuration. But the 1990 nine-horse Met Mile was loaded in terms of horseflesh, and will likely never be matched in terms of depth because it featured a fascinating four-way go of past and future champions:

Housebuster, the only 3-year-old in the field, blitzed straight to the front and led until the final few jumps when Criminal Type surged past for a neck victory. Easy Goer closed late but could do no better than third at 2-5 odds (watch it here).

Even though this showdown among four champions happened 29 years ago, some aspects of the race make it seem like a relic from a more distant era: Easy Goer, handicapped at 127 pounds, was spotting Housebuster a gargantuan (by today’s standards) weight spread of 14 pounds, and he gave Criminal Type seven. Easy Goer had raced only 12 days prior, using a $45,000 stakes as a tune-up, a training move you rarely see today. In terms of overall race spacing, it was only the end of May, but Criminal Type was already making his eighth (!) start of the year; Housebuster his seventh. None of the horses raced on Lasix, which was banned in New York. Even the 32,139 attendance seems unfathomably robust.

So what does all of this reminiscing have to do with today? It’s not like we’re capable of turning the clock back to rosier times for racing. You don’t even have to go back 29 years to recall when the industry was facing far fewer crises. Remember just six months ago when the biggest brouhaha in the headlines was that Santa Anita was changing announcers?

Since then, the sport has endured the California equine fatality emergency, highly charged debates about whip and drug reforms, the messy Stronach clan lawsuits that threaten the family’s portfolio of tracks, the ongoing battle between the Maryland Jockey Club and the City of Baltimore over the future of Pimlico Race Course and the GI Preakness S., and the unprecedented GI Kentucky Derby disqualification and its cumbersome snarl of litigation.

All that is a large collective burden to bear, and the year isn’t even half over yet.

But here’s hoping that at least one historical constant will remain the same: That A-level, on-track matchups of the game’s top equine stars will act as a balm to help ease the pain and strain, at least temporarily.

Even if you think that Gary West’s $20 million head-to-head “match race within a race” challenge to rival horse owners is a kooky idea, you have to admit that at least he’s on the right track about harnessing the attention-grabbing power of an old-fashioned grudge match.

Maximum Security (New Year’s Day) versus War of Will (War Front) might not ever carry the cachet of Sunday Silence versus Easy Goer. But thicken the plot by looking forward to the returns of Derby-winner-by-DQ County House (Lookin At Lucky) and Omaha Beach (War Front), who was forced to scratch as the commanding Derby fave two days before the race, and there could be a four-way go later this season that might recall that Memorial Day Met Mile from 1990.