The Week in Review: Erik Johnson Shows That Racing Has a Big Heart 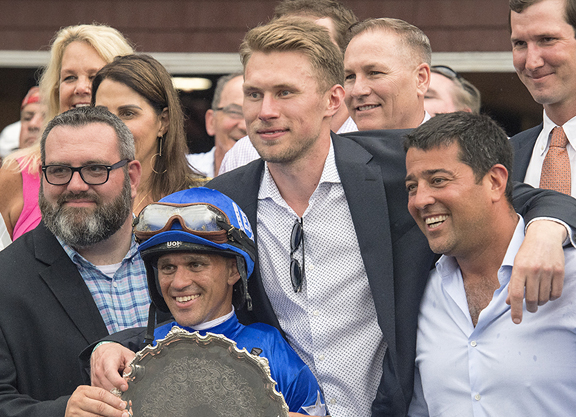 Every time a horse breaks down at a Southern California racetrack, it is front-page news. But no one bothers to dig any deeper and find out if there is more to the story. Had they when three horses were injured Nov. 10 at Del Mar, they would have discovered how much some individuals really do love their horses and the extent they will go to make sure they are safe.

It was an awful day at Del Mar, with three horses suffering serious injuries, which led to two of them being euthanized. The third was an $8,000 claimer named Princess Dorian (Idiot Proof). She is alive today and that probably wouldn’t be the case if not for owner Erik Johnson’s steadfast determination to do whatever it took to save the mare.

“We’ve only owned her for a couple of months, but I have so much love and respect for her,” Johnson said when appearing on the TDN Writers’ Room podcast. “It doesn’t matter to me if she were a graded stakes winner or an $8,000 claimer. I felt like it was up to me to do what was best for her.”

Johnson is an All Star defenseman for the Colorado Avalanche, who were off last Sunday. He was watching the race on television and experienced what no owner ever wants to experience, watching their horse break down. Princess Dorian had a fractured left front leg.

“My stomach just sunk,” he said. “It was the worst feeling ever.”

If racing’s critics are to be believed, race horse owners are a callous group who care more about the money than the welfare of the animal. That’s not most owners and it’s certainly not Johnson.

“It’s so great training for a guy like Erik Johnson,” said Andrew Lerner, who trained Princess Dorian and is also her co-owner. “He loves the sport so much. He’s not a greedy owner at all. The first thing he said when he saw her go down on TV was, ‘Do whatever you can to save this horse. I don’t care what is costs.'”

Had Johnson cared more about the money than the horse, he would have told Lerner to let her be put down. The injury was career-ending and Princess Dorian has no value as a broodmare. Johnson estimates that the total costs involved in saving the horse, who has no economic value, will be about $20,000.

On Wednesday, Princess Dorian underwent surgery at the San Luis Rey Equine Hospital. Lerner reports that she is doing well, but says the surgery was just one step in what might be a long and difficult road to recovery.

“She’s doing really well,” he said. “She was a good patient and has such a big heart. That fighting spirit has helped her get better. She has a long way to go before she is fully recovered and we are all aware of that. We cleared one hurdle with the surgery. She’s bearing weight on it now. We’re hopeful she’ll come out of this ok and lead a fun life on the farm.”

Johnson is well aware of the pressure racing is under in light of the rash of breakdowns earlier this year at Santa Anita and the death of Mongolian Groom (Hightail) in the GI Breeders’ Cup Classic. He knew how important it was for Princess Dorian to not become a statistic, to not become fodder for animal rights activists.

“I think with the negativity that has gone on in California, people need to see that owners and trainers care for their horses in this way,” he said. “I think 99% of owners really care about their horses. It was important for me to show the general public that they need to look at the lengths that these people are going to go to save a horse’s life. Princess Dorian is worth nothing as a broodmare if she retired today. But she’s worth everything in my mind, which is why I am trying to save her life and give her a good life. She earned $150,000 on the race track. How could we not step up and try and do what’s best for her? And if she had a chance to survive, we’re going to do everything we can to do it.”

A cheap horse will likely live out her life in a pasture on a farm somewhere, and all because her owner did the right thing. This is the other side of horse racing, the one the public doesn’t hear anything about amid the uproar and the negative press. When it comes to the horse, racing people really do care.

Has the Kentucky Derby Become Too Big?

Everyone wants to win the GI Kentucky Derby, but should it be such a priority that trainers and owners sacrifice a horse’s 2-year-old season in hopes that they’ll have a horse who isn’t running on empty come the first Saturday in May?

We’re seeing a new trend where owners and trainers are so focused on winning the Kentucky Derby that they look past some of the most important juvenile races on the calendar. The latest example is Independence Hall (Constitution), whose win in the GIII Nashua S. was so impressive that many consider him the horse to beat in the Derby. The next step for him seemed to be the GII Remsen S., but trainer Mike Trombetta said last week that he will sit that race out. He’s foregoing the chance to win a $250,000 race in which Independence Hall would be the odds-on favorite if he were to run. Instead, we likely won’t see the horse until 2020.

Last year, it was Instagrand (Into Mischief), whose owner, Larry Best, pulled the plug on his 2-year-old campaign after he won the GII Best Pal S. in August. The move looks like it backfired as Instagrand never made it to the Derby and is 0 for 3 on the year.

Is less actually more? We will find out.

No Rush to Synthetic Tracks

Keeneland Vice President and COO Vince Gabbert said last week that Keeneland has no plans to install a synthetic surface. It also seems that Santa Anita is sticking with dirt for the time being. The Stronach Group’s chief strategy officer told the TDN’s Dan Ross, “What I don’t want to do is throw in a synthetic track and work out the horses hate it, the horsemen hate it.”

These pronouncements come despite the fact that synthetic surfaces are safer than dirt tracks. Not only have synthetic tracks proven to be safer in this country than dirt, but the newest version of them is recording eye-opening results in England. There is a Tapeta synthetic surface at Wolverhampton and Newcastle and, according to the last account from the British Horse Racing Authority, there have been 8,799 starts since the last fatality at either track. Overall, there have been 0.03% fatalities over three years at both tracks.

The numbers don’t lie. The decision to stay with dirt may please breeders, owners, trainers and some gamblers, but how will it play with the public at large, which is demanding that racing change? Can the sport really argue that it is doing everything to make racing as safe as possible when there seems to be no movement anywhere to install synthetic tracks?