The “Untold” Story of Synthetics in California 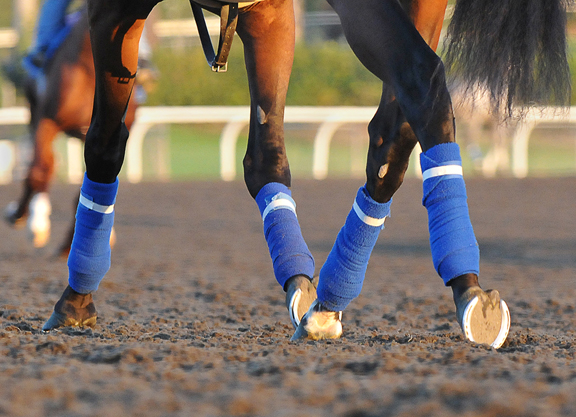 It may have started in 2006, but California’s synthetics experiment sure seems like a tale as old as time. Certainly, it’s tangled plot lines–ill-chosen sands, cut corners, drainage problems–have endured more renditions than there are camp-fires to sit around.

But now, as tongues wag with growing enthusiasm for another round of synthetics in the state, it’s time to revisit the story once more, and a hitherto undisclosed cautionary tale with the tarnished sheen of what might have been.

“We were going to understand how these materials were going to function under the unique environmental factors here,” said attorney, Drew Couto, about a previously “untold plan” to employ Kenneth Vecchio–a professor of nanoengineering at the University of California San Diego–to conduct a battery of scientific tests to see how the available synthetic materials would have behaved under the conditions at each SoCal track. This, before the first synthetic surface in California had even been identified and installed.

The objective, Couto said, was to single out the one surface best adapted to the environments across each track location.

“By having a uniform surface, when they went from one [track] to the other, we were going to reduce the risk of injury,” said Couto, who at the time was president of the Thoroughbred Owners of California (TOC). “We were saying, ‘Let’s take an analytical, methodical approach to this.'”

The year 2006 smacks of similarities with today. Rising fatality rates had led to simmering public discontent. The powers that be had their backs against the wall. Synthetics, it was widely thought, was a white knight. Indeed, in May of that year, the CHRB gave Hollywood Park, Santa Anita, Golden Gate Fields and Del Mar until the end of 2007 to switch out their dirt surfaces for synthetic.

At this point, Couto and a group of executives–California Thoroughbred Trainers’ Ed Halpern, Del Mar’s Tom Robbins and Craig Fravel, and Santa Anita’s Ron Charles–decided the mandate required a prudent approach guided by expert opinion, said Couto. “That was the fundamental objective of bringing in Dr. Vecchio,” he said.

A few weeks after the CHRB’s mandate was inked, most of the group met Vecchio for a lunch at the exclusive Lodge at Torrey Pines, in La Jolla, said Couto.

The study–projected to cost between $180,000 and $200,000–was to be funded using money from the California Marketing Committee, Couto said.

“We thought we had enough support [from the board] to get this done,” he said.

Only, days after that lunch, Hollywood Park made the formal announcement that it was installing a Cushion Track.

“[Craig] Fravel and I just looked at each other and went, ‘Well, there goes that idea,'” said Couto. In the mad scramble to implement synthetic tracks in California–indeed, Hollywood Park’s Cushion Track was open to training by the start of September that year–Vecchio never conducted his study.

“We were hell-bent on putting in a synthetic track”

Vecchio told the TDN that, at the time of Hollywood Park’s formal announcement, he had already acquired samples from a variety of potential surface composites, and had used some of the scientific literature on their “mixes and their makeups,” to put together a proposed outline of a study. He had also fielded quotes for laboratory “test chambers” which were needed to evaluate the materials under a battery of different conditions.

So, what would the study have looked like? According to Vecchio, it would have taken about six months to complete, and was designed to comprise a series of accelerated tests on some of the proposed synthetic surfaces to see how the materials used would have reacted in an environment and under conditions resembling that of the various Southern Californian racetracks.

“The idea was to accelerate the nominal conditions you were expecting the materials to experience in the working environment,” he said.

That involved looking at the degradation of the materials in two ways as they were constantly exposed to harsh ultraviolet light and to saline water. The first concerned “overall compaction behavior changes” of the surfaces, he said, while the other related to the “material properties” of the individual surface components.

“Let’s say it starts to compact differently–you want to know which material components of the surface is causing that,” he said.

Vecchio wasn’t aware of any prior accelerated tests that had been conducted on the proposed surface materials, to understand their degradation rate in an environment peculiar to the ones in which they would soon be employed, he said.

“If they didn’t really have information about the durability of the surface in Southern California conditions, it would have made sense to do that before investing money in the track,” Vecchio added. “I would have wanted to know that for that kind of investment.”

According to Jack Liebau, president of Hollywood Park when the Cushion Track was singled out and installed, track management had been eyeing synthetics since the year prior, when the Bay Meadows Land Company purchased the property from Churchill Downs Incorporated, well before the CHRB’s mandate on synthetics.

“We were hell-bent on putting in a synthetic track,” said Liebau. “But at that point in time, it was clear that Polytrack was the flavor of the month because it had the backing of Keeneland. Keeneland in fact owned 50% of it.”

Liebau wasn’t wedded, he said, to the idea of the Polytrack, however. And so, during the winter of 2005-2006, he and a small contingent from Hollywood Park–Martin Panza, Hollywood Park’s racing executive at the time, general manager Eual Wyatt, and the track’s former superintendent, Dennis Moore–took a series of reconnaissance trips to the United Kingdom, to examine some of the synthetic surfaces already in use over there.

They ended up bringing back with them “piles of samples”–materials they stored in the Hollywood Park car park, where they studied them over a couple of months, “see how they reacted to the temperatures,” said Liebau. “It wasn’t a half-assed investigation.”

In the end, the decision came down to a toss-up between Cushion Track or Tapeta–the former, imported from England, winning out. “We went the extra mile as far as the under-surface was concerned, and it proved to be a very successful track,” he said, of an eventual hybrid material, part Cushion Track, part sand. “We used it for eight years, till we closed in December of 2013.”

Liebau said that he “wasn’t party” to Vecchio’s planned experiments (something that Couto confirms). But Liebau–who suggested that talk now of such a plan to be “a bit of historical revisionism”–warned the “rush” to put in synthetic tracks can’t be replicated again, if California once again heads in that direction.

“For that reason alone,” he said, “there needs to be much steady thought about what the hell’s going on.”

What do the manufacturers themselves say about preparations they took before installation? Martin Collins, founder of the Polytrack, which was installed at Del Mar, explained that his company had conducted their own accelerated scientific tests at a laboratory in France.

Nevertheless, “There’s nothing like experience” to see how the materials will adapt to a particular climate, he said. “You can’t simulate the environment–it’s impossible. You can’t simulate everyday changes. Some days you get more sun than others, more wind than other days. It varies all the time.”

And while the series of evaluations that Vecchio had planned might have helped “to some degree,” what would have been more beneficial is if the surface had first been trialed at a nearby training facility to see how the waxes responded over a period of time, Collins said.

“For all the testing in the world, there’s nothing like sticking it outside and getting horses to go over it,” he said. “There’s a lot of factors here.”

For, more than just an issue of producing the perfect surface, the success or failure of any synthetic is incumbent upon the way it’s managed on a daily basis, Collins said. Indeed, his Polytrack is currently installed at 26 different racetracks around the world, he said, emphasizing how there’s no one-size-fits-all maintenance protocol that can be employed at each individual location, though a general rule-of-thumb is “the less work you give it” the better.

“Since all this happened, we have spent literally hundreds of thousands of pounds, developing better quality waxes and polymers,” Collins added. “We can produce a much better surface now than we did then.”

Couto, nevertheless, is more confident that, had Vecchio had the opportunity to conduct his six-month battery of tests, California’s relationship with synthetics could have been a far more magnanimous one.

“I’ve never been surprised by the outcome,” said Couto, of an experiment which has been estimated to cost the state as much as $40 million. “Knowing how it came about in the first place, nobody should have been surprised.”

[Note: the TDN reached out to a number of individuals familiar with the plan to employ Kenneth Vecchio, though none, other than those quoted above, were willing to go on record. Of those that remembered the plan, all confirmed the general outline of events, though their chronologies of events were a little hazy from the near 15 years that subsequently passed. \The TDN also reached out multiple times to Tapeta founder, Michael Dickinson, but didn’t hear back before deadline].