Home » Archive » Shared News » The Summer of the New York-Bred

The Summer of the New York-Bred 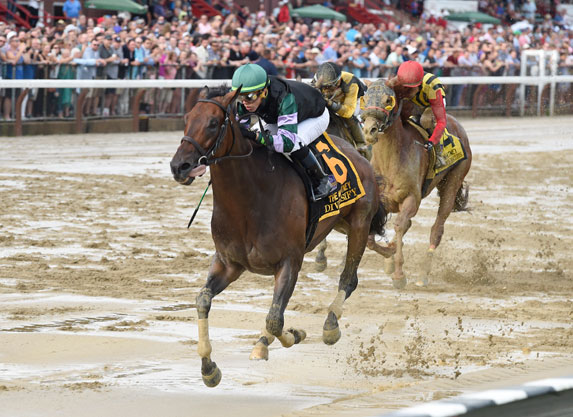 SARATOGA SPRINGS, NY–The day was May 3, 2003. The 129th Kentucky Derby was set to unfold under clear skies in front of a crowd of 148,530 at Churchill Downs, and a chestnut owned by a ragtag group of six high school friends was getting ready to make history. Yes, the game victory of Funny Cide (Distorted Humor) was a significant one because it struck a blow for geldings, the blue-collar variety of racehorse, among the parade of colts with stallion futures who had so dominated the Run for the Roses. But there was another reason that the longshot’s heroics made a dent in racing lore, one that has proven much more meaningful over time: Funny Cide was a New York-bred.

“It was New York pride,” winning rider Jose Santos said when asked to describe the effort of the “gutsy gelding,” as New York-based track announcer Tom Durkin had dubbed him.

Few could foresee what that exhibit of pride would have portended 15 years later, but today, New York-breds are so competitive and, in some cases, so dominant, that their home-state designation has become a selling point, rather than a hindrance, throughout the sport.

“Funny Cide was a walking equine marketing campaign for us,” said Jeff Cannizzo, executive director of the New York Thoroughbred Breeders. “In his day, being a New York-bred and winning in graded company, running on Saturdays and Sundays, it was essentially an anomaly. Funny Cide demonstrated the incentive program and he really jump-started that at the Grade I, Triple Crown level. Today, literally every weekend around the world, you have New York-breds not just performing, but actually winning.”

Back when Funny Cide captured the Derby, and two weeks later, the Preakness, New York-breds were considered second-class citizens in the racing world. Now, they count among them some of the fastest horses on the planet, and nowhere has that been more evident than this summer at Saratoga, where they have been impossible to miss.

“To have a New York-bred win the Derby and the Preakness and have every chance to win the Triple Crown, that was a pivotal year,” said trainer Rick Violette, who also served as the president of the New York Thoroughbred Horsemen’s Association from 2008-2017. “It convinced people that you could expect a high-quality, consistent racehorse even if they were bred in New York, and that’s been confirmed since, as we’ve had multiple Grade I winners in multiple years. You can’t just say it’s the exception that proves the rule anymore, because we have too many exceptions.”

There was the Aug. 4 GI Whitney S., one of the two most prestigious races the Spa has to offer, which was conquered by Empire-bred, leading older male and Violette trainee Diversify (Bellamy Road), and the state-bred runner-up Mind Your Biscuits (Posse), who himself has raided Dubai to capture back-to-back renewals of the G1 Dubai Golden Shaheen. Last Saturday was another showcase for the hometown team, as a gutsy chestnut who would’ve made Funny Cide proud, Voodoo Song (English Channel), annexed the GI Fourstardave H. to follow Sue’s Fortune (Jump Start) capturing the GII Adirondack S. earlier in the card.

“We had a one-two finish in the Whitney with the top two choices who happen to be two of the top 10 horses in training,” Cannizzo said. “Voodoo Song wins a Grade I here in Saratoga, Fourstar Crook (Freud) runs a bang-up second in the Beverly D. the same day. It’s literally every weekend in racing that New York-breds are on the map.”

Clearly, this didn’t happen solely because of Funny Cide, and it’s taken a lot of work in the time since he shocked the sport to get the New York-bred program to this level. There were lean years, and major questions about the future of racing in the state as a whole, after Cannizzo came aboard in 2008. The New York Racing Association was in dire fiscal straits and its quest to secure the lifeline of video lottery terminal revenue was tied up in the kind of bureaucratic red tape Albany is infamous for. The sport’s principals in the state were generally more worried at that time about keeping the lights on than bolstering its state-bred incentive program.

“When I started at NYTB, you had the NYRA franchise unraveling,” Cannizzo recalled. “There was a lot of uncertainty still. There was no VLT operator even earmarked at that point for Aqueduct and we had New York City OTB collapsing into 2010, so my first few years here, there was significant financial struggle, uncertainty and a dark cloud hanging over New York racing.”

The fog finally began to lift in September 2010, when the Genting Group, an international gaming conglomerate, was given final approval to install VLTs at Aqueduct. That led to what is now Resorts World, a state-of-the-art casino, being built next door to the Ozone Park oval in 2012 and providing a strengthened foundation for New York racing and, by extension, the growth of the New York-bred program.

“Prior to the VLT era, you had people leaving ownership and breedership by the truckload, foal crop was dropping to the basement level, purse structure was dramatically different by 100%, the breeding fund was different by upwards of 100%,” said Cannizzo. “Once Resorts World came on, much change has taken place since then and it’s been a renaissance period for our industry here in New York.”

The New York-bred program has seen substantial growth in purses and owner/breeder incentives, as well as foal crop size, throughout this decade. At a time when registered foal numbers are on a steady decline throughout the industry at large, the number of New York-breds has been surging and as a result, has comprised a larger share of the national market. According to a study by The Jockey Club, the program produced just 1,185 foals in 2011, which accounted for 4.8% of all the foals in America that year. In 2016, that figure jumped to 1,502 foals, representing a record 6.7% of the total crop size.

“We’ve had people coming from all over the world into our market here, and horsemen all have New York-breds now in their stable,” Cannizzo said. “We’ve created a commercial marketplace in New York that absolutely did not exist to this extent 10 years ago. Literally every aspect has changed here over a 10-year period. Purse structure has grown by $60 million over that period and breeder rewards are at an all-time high.”

Just as noteworthy as New York-breds’ unprecedented success on the racetrack has been their skyrocketing value in the sales ring. Fasig-Tipton’s recently-concluded New York-Bred Yearling Sale sets new records every year, and this renewal was no different, posting all-time highs in gross, average and median, as well as selling the highest-priced offering in the auction’s history when a Pioneerof the Nile colt hammered for $600,000.

“When the program first started, none of the major trainers had New York-breds,” said Violette. “The expectations used to be pretty low, and at sales, if it was a New York-bred, the page would just be turned. Now, there’s no longer a ceiling to their ability or performance, and you just can’t afford to do that.”

“The sales market has definitely evolved and changed for the better,” Cannizzo said. “It goes hand-in-hand with the incentive and purse structure here. We have a commercial market largely because we have the strongest restricted racing product in the world.”

In totality, what all of this means is that the New York-bred program has achieved the best of both worlds: creating an exclusive space to boost breeding and racing locally, while also establishing credibility that its horses can compete anywhere on the planet.

As Violette said of the Fasig-Tipton auction, “It’s a New York-bred sale, but first and foremost, it’s a racehorse sale.” And everyone with a stake in racing in the Empire State has, at least partially, one gutsy gelding with “New York pride” to thank.