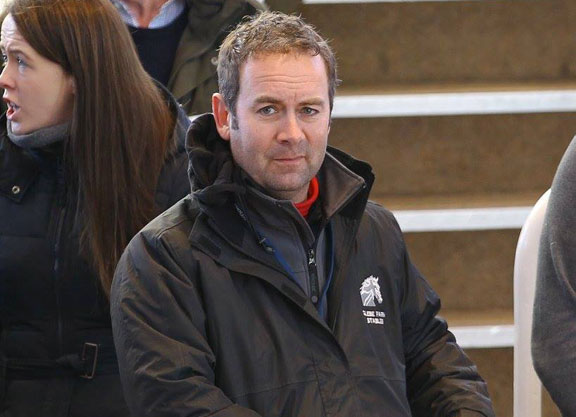 Increased competition from abroad in recent years has made it more difficult for independent studs in the UK to secure top-class stallion prospects. Add to that the considerable obstacles brought on by Brexit, and British breeders' challenge of accessing the continent's best sires has been amplified. That's why Nick Bradley and Sam Hoskins are spearheading an effort to keep more of the best stallion prospects in Britain with their new initiative, The Stallion Syndicate, which will see a number of UK breeders and stallion masters band together to target the best Group 1-winning colts.

“A lot of UK breeders this year have had the problem that a lot of the best stallions are standing outside the UK,” Bradley said. “With the UK leaving Europe through Brexit it's made things a lot harder for the UK breeders. The costs have increased and accessing these stallions has gotten a lot harder. We're not allowed to use our own transport [into Ireland] unless it's been certified in Ireland, and we haven't been able to do that with Covid.

“So things are a lot harder this year, and I felt it would benefit the UK breeders if we could put something together whereby we could try to get some of the stallions off the track to stand in the UK rather than going to Ireland or France. I've spoken with a lot of UK breeders, and the aim is to form partnerships to go and purchase one stallion each year to stand in the UK. We've almost completed [the syndicate] before the [first] horse has even been bought. The general idea is that we'll buy a horse to stand in the UK and it's owned by the leading UK breeders.”

Among those who have expressed interest in The Stallion Syndicate, Bradley said, are Whitsbury Manor Stud and The National Stud-with Ed Harper and Tim Lane already signed on to the management committee-as well as Newsells Park, Tweenhills, Mickley Stud, Elwick Stud, Hillwood Stud, Longview Stud and Salcey Forest Stud, while the likes of Peter Stanley, Dermot Farrington, Oliver St Lawrence and The Jockey Club have also voiced support. The Stallion Syndicate of 2021 will include 150 shares, with each share earning the owner one nomination in each stallion each year. The profit from additional seasons sold at the advertised stud fee will be divided among the shareholders. A committee of the larger shareholders will be formed, with a minimum 65% agreement from the board required to purchase a colt. The first colt purchased will stand at The National Stud, with future locations to be decided among the committee.

Conversations with potential shareholders are continuing, and Bradley said he and Hoskins have already made a shortlist of colts.

“Myself and Sam have looked at the 2-year-olds from last year who performed well on the track in England, Ireland and France and we've come up with a shortlist of about eight horses,” he said. “We want something in place so that when racing starts in a month and we see the horse that goes and wins a Group 1, we're in a position to go and buy the horse rather than reacting and trying to get something sorted. We want to be able to compete with the big studs in France and Ireland so that we can secure a stallion prospect equal to the stallions that they're currently able to stand.”

Bradley's racing partnerships through Nick Bradley Racing have made big strides since coming onto the scene in 2015, their black-and-white silks now familiar on some of racing's biggest stages, with group-winning fillies Dandalla (Ire) (Dandy Man {Ire}) and Fev Rover (Ire) (Gutaifan {Ire}) being flagbearers in 2020. But Bradley also operates burgeoning mares' syndicates from his farms in North Lincolnshire under the Glebe Farm Bloodstock banner. He has 25 mares foaling in 2021, and including the young mares entering stud can count about 45-head. Among the highlights of those is Learned Friend (Ger) (Seeking The Gold), who Bradley bought in partnership for 21,000gns at Tattersalls July in 2016. Four months later her second foal, Inns Of Court (Ire) (Invincible Spirit {Ire}), broke his maiden on debut for Andre Fabre and went on to win three Group 3s over sprint trips in addition to placings in the G1 Prix Jacques le Marois and G1 Prix de la Foret. Inns Of Court stands for €5,000 at Tally-Ho Stud and has his first foals arriving this year, and his dam has an Oasis Dream yearling filly and was scanned in foal to Lope De Vega (Ire) this week.

Bristol Fashion (GB) (Dansili {GB}) was the very first mare that Bradley bought for 35,000gns back in 2012 in foal to Rip Van Winkle, and the filly she was carrying at the time was later named Cribbs Causeway (Ire) and won five times for Nick Bradley Racing and was twice Group 3 placed. Bristol Fashion is in foal to Calyx (GB) and visits Mehmas (Ire) later this season.

The stakes-producing Mujabaha (GB) (Redoute's Choice {Aus}) was bought by Bradley for €55,000 at Arqana December, and she has foaled a Kodiac (GB) filly and will visit Blue Point (Ire) in the coming weeks.

Another mare to foal recently at Glebe Farm was Vandergirl (Ire) (Dutch Art {GB}), who was herself unraced but is a half-sister to the Lope De Vega trio of black-type winners Hero Look (Ire), Manuela De Vega (Ire) and Isabella De Urbina (Ire). It didn't take a whole lot of science, then, to send Vandergirl to Lope De Vega, and she has produced a filly.

“She's the dam of Glitter Queen (GB) (Night Of Thunder {Ire}), who won the Qatar Oaks in December, and her 2-year-old last year was called Rising Star (GB) (Fast Company {GB}),” Bradley said. “She won twice for Marco Botti and is held in high regard. She's in foal to Mehmas and we're not quite sure where she's going to go next; she's a later foaler.”

Joining the Glebe Farm broodmare band this year is Furlong Factor (GB) (Adaay {Ire}), who was a winner and listed-placed last year for Bradley and has already been covered by Ribchester (Ire).

While the odd horse will be retained and a few may go to the sales as yearlings, the majority of the Glebe Farm crops are sold as foals. Bradley said his focus is on growing the quality of the mare syndicates.

“The way I see the market is that generally the higher end is the strongest end; it's where we all want to be,” he said. “The cost of keeping a mare is generally the same no matter the standard of the mare, so what I try to do is find the best quality mares I can for my clients. We're very much in our infancy; most of our mares only have one or two foals on the ground so we haven't had a heap of runners yet. What we've focused on is trying to buy nicer mares for the farm.”

There will be plenty of focus, too, on the Nick Bradley 3-year-olds this season, with the likes of G3 Albany S. and G2 Duchess of Cambridge S. winner Dandalla and Fev Rover, winner of the Listed Star S. and G2 Prix du Calvados, back in training ahead of the Classics with Karl Burke and Richard Fahey, respectively.

“Fev Rover went back into training in mid-December,” Bradley confirmed. “Richard wanted to give her plenty of time. She'll be entered for the G3 Nell Gwyn S. at Newmarket and the idea is that she'll go up for the trial and then she'll go the [G1 1000] Guineas at Newmarket. She's been entered in the French version [G1 Poule d'Essai des Pouliches] as well, but right now we're thinking she's going to go to Newmarket.

“Dandalla came in slightly later, but both fillies are exactly where we want them to be. She's settled a lot better this year; she was an out-and-out sprinter last year, but Karl tells me she's settling a lot better at home and he couldn't be happier with her. He sends me videos every day and she's working with a couple lead horses. She goes to the [G3] Fred Darling, which is the other 1000 Guineas trial at Newbury. We actually put her in the Newmarket 1000 Guineas [on Tuesday]; we were contemplating not. She's more than likely going to go to the Fred Darling and then to the French 1000 Guineas.”

“Mystery Angel was in training in early December and our thinking was that there was a listed race at Saint-Cloud on Mar. 11, the Rose De Mai. That's her first big target,” Bradley said. “She ran the other night at Wolverhampton and we knew she'd need the run. She didn't get the clearest of runs but she ran very well. She was about 80% fit going into that and she'll go to Saint-Cloud nine days from now and we're expecting her to run a massive race.”

Mystery Angel could head further afield thereafter to the G2 UAE Derby on Mar. 27, or stay on in France.

“She's been accepted for the UAE Derby,” Bradley said. “We aren't sure what we'll do, but it's certainly an option. We're either going to go there or leave her in France for another listed race on Mar. 21, the 10 1/2 furlong race against the colts. We're probably going to run in France on the 11th and then make a decision.”

And there is plenty to look forward to, also, from the Nick Bradley Racing 2-year-olds.

“We have 32 2-year-olds in training,” Bradley said. “They all come to our farm after the yearling sales and then they're dispersed in November or December. I have five at Richard Fahey's, and there is a sister there to Accidental Agent [by Muhaarar {GB}) who has thrived since she was bought at the yearling sales. I have a Time Test filly that I named Simply Gorgeous; I thought she was the nicest yearling I saw at the sales last year. She had a bout of colic the day after I bought her so we slowed down her stages and she only left two weeks ago to join Richard Fahey.

“At Karl Burke's we have 12 and he's going to increase their work over the next couple weeks, but at the moment he's telling me I've got a very smart bunch. There is a Mastercraftsman filly there that we like a lot who has been named Guilded. There is an Adaay filly called Honey Sweet that we bought from Book 2 who is going particularly well. We have a Lope De Vega filly at Jessica Harrington's who is called Lope's Gold, and she's done everything well so far.”