The Safe Act and Slaughter: Q & A With Chris Heyde 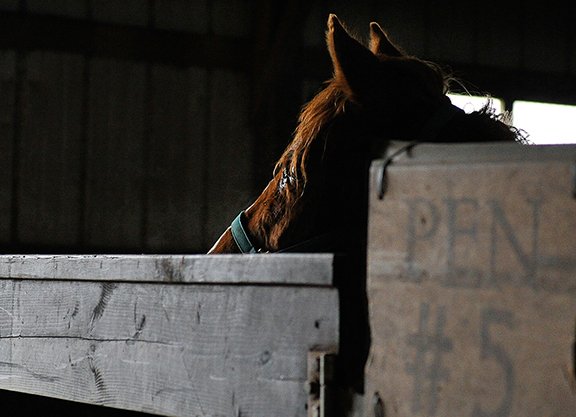 Chris Heyde is the founder of Blue Marble Strategy, LLC, a government affairs firm in Washington, D.C., which is the country's leading animal protection lobbyist. Heyde has been working towards passing a ban on horse slaughter in the United States for almost 20 years, serving as head of government and legal affairs for 17 years for the Animal Welfare Institute, the nation's oldest federal animal protection legislation program. Before entering the animal protection field, Chris was vice president of a Washington, D.C., lobbying firm that represented clients from health care, education and defense. Prior to that, he worked on the staff of former Republican U.S. Senators Chuck Hagel of Nebraska and Connie Mack of Florida, covering issue areas that included animal protection and the environment, veterans' affairs and small business.

We caught up with Heyde as news and social media posts of Thoroughbred racehorses being exported for slaughter continue to plague the racing industry.

TDN: What is the status of horse slaughter right now in the United States?

CH: Certain states have a ban on the slaughter of horses. There is no federal ban on horse slaughter or the transportation of horses for slaughter. Horses are not being slaughtered legally anywhere in the U.S. right now because every year we push congress to de-fund the USDA inspectors that are necessary to operate slaughterhouses. It's risky because there is never a guarantee that the de-fund is going to happen, and we must pass it each year.

TDN: What is the current pending legislation and how would it stop the transport of horses over the borders for slaughter in Canada, Europe, Asia and Mexico?

CH: The bill is called the Safeguard American Food Exports (SAFE) Act. It took years for us to get to this version. It deals completely with food safety. Horses in the course of their lives are given drugs and treatments that are not allowed to be used in animals intended to be food. Even a prevalent medicine like Bute is banned in livestock to be eaten by humans. And Bute never leaves a horse's body. That is just one small example of the many things that horses are regularly given that are banned by the USDA. So, the SAFE Act says it is illegal to export horses that are intended for food.

TDN: How would the SAFE Act work at the border?

CH: Now, when someone has a truckload of horses that are heading for slaughter, they have a minimal amount of paperwork to produce when they cross. After the act is passed, no horse could get through the border without a valid health certificate, identification, proof of plans for quarantine, and all of the other paperwork necessary for owning, breeding and showing. It would make no sense economically for killer buyers to do this and to forge papers would have more of a penalty that a killer buyer would likely risk. It would cost more than they would make on the sale of the horses.

TDN: Does the SAFE Act ban the slaughter of horses within the U.S. as well as the export of horses?

CH: The SAFE Act considers horsemeat to be toxic and prohibits if for human consumption. It couldn't get USDA approval which is needed for meat that is consumed by humans.

CH: One reason is that we have a new administration and President Biden was one of the original co-sponsors when he was a senator. He supported the effort when he was a vice president and there is every reason to think he will support it now. More than ever before, no one reputable is in the business of transporting horses for slaughter and there is no real economic engine to the practice. It is just these killer buyers making a few bucks on this gruesome death for American horses.

One of the opposing arguments was that there would be too many unwanted horses to care for if they were not slaughtered. That was always a red herring, but now it is completely illogical.  Since the numbers of horses going to slaughter has diminished from almost 400,000 a year to just 30,000 or so, there has been no increase in the number of horses being found neglected or abandoned. Plus, 20 years ago, except for the Thoroughbred Retirement Foundation, there was no real discussion about retirement, rehoming, re-training, responsible breeding, accreditation or funding for aftercare. But within all of that time until now, the landscape has changed dramatically and in so many ways. To name a few, the Homes for Horses Coalition was formed, there are hundreds more horse rescues, there are grants available for people to expand their horse rescue capacity and horses that are not rideable have become therapy horses. Probably, most important is how the Thoroughbred industry took the lead and completely transformed its way of thinking about aftercare. Tracks have taken action to prevent slaughter and find homes for the horses on track grounds, the TAA was formed and funded, and Thoroughbreds are successfully being promoted in all different disciplines and it is mostly coming from the industry itself.

If the transport of horses over the borders stopped right now, the horses that would otherwise go to slaughter would not even be noticed. Remember, because it is a business, horses are being sought out by kill buyers for slaughter. If or when the law passes, only 1,000 or so horses in the pipeline would have to be dealt with.

TDN: If no one reputable is doing it and it has no economic engine, why hasn't this passed already and what do we need to do differently

CH: It lost momentum after John Hettinger died. Even though the opposition has weakened and the facts are more in favor of a ban, there is no longer energy on the offensive. There are a few activists still screaming about horse slaughter, but until horse owners and, hopefully, the Thoroughbred industry stands up and tells their members of Congress that this is the priority, when push comes to shove, it will keep getting placed on the back burner.

The public and the people with power have to make it clear to their legislators that just co-sponsoring a bill and saying you support the ban is not enough, they have to make it a priority and see it through to passage–just like they did in January with the Horseracing Integrity and Safety Act. There comes that time when senators or representatives are negotiating on what actually passes and what slides. Recently, there is no funding and no one with clout to push this and make it a priority. Consequently, no legislator feels that his or her constituents are going to vote this issue.

TDN: What are the steps?

CH: First, we have to find members of the racing industry–major horse owners and business owners willing to speak to their representatives and demand action. Elected officials need to believe that they will be held accountable in the voting booth and in campaign contributions. Otherwise, they won't focus on it.

TDN: Is there a grass-roots marketing effort as well?

CH: Yes, particularly in major media outlets, and the Thoroughbred industry can take the lead on this so that the story will be how they are leading the fight as opposed to looking the other way while thoroughbreds still get slaughtered.

TDN: Who are the current co-sponsors of the Safe Act?

TDN: Is there a need to raise money?

CH: Yes, we need the lobbying aspect and we need some public relations and marketing. But it is not a long campaign and as I said, it can all be positive for the Thoroughbred industry.

TDN: How do state bills like the one that recently passed the New York Senate help?

CH: It helps a ton. If New York bans transportation for slaughter on its roadways, that is great because it closes one of the routes to Canada. But, even generally, the more states that are on board, the easier it is to pass a federal bill. The federal bill is essential if we are going to stop the horses from crossing the border.

TDN: Where can people go to read more?

CH: You can visit www.horsesinourhands.org. There you will find a detailed fact sheet on the issue of horse slaughter along with ways to contact your legislators.

TDN: How can people contact you to get involved in taking advantage of this perfect storm and get this law passed?

CH: They can send me an email to [email protected] and I will be happy to answer any questions.  We need all Americans to stand up and demand passage of this humane and long overdue bill.