The Remarkable Journey Of Starspangledbanner 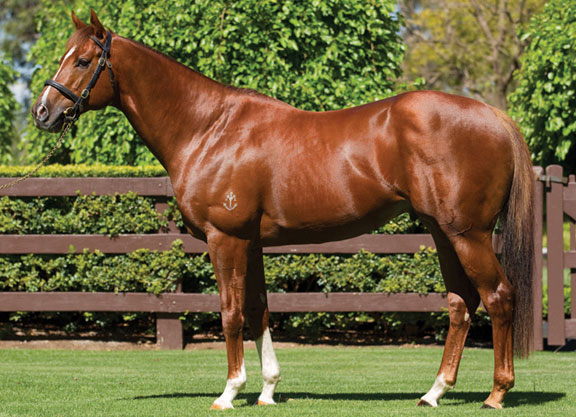 An array of success stories have emerged from the remarkable crop of stallions that retired to stud in Europe in 2011 with no less than eight of them having sired Group 1 winners thus far, but of all of those stories, none have as many twists and turns as that of the remarkable Starspangledbanner (Aus). An Australian-bred son of Choisir (Aus), Starspangledbanner was purchased by a syndicate for A$120,000 at the Inglis Premier Yearling Sale and sent to be trained by Leon Corstens. He quickly progressed into a high-class 3-year-old and while he is generally remembered as a sprinter, his first Group 1 win came when he made all to win the Caulfield Guineas over a mile, leaving So You Think (NZ) (High Chaparral {Ire}) languishing back in fifth and in the process becoming the first Group 1 winner for his sire Choisir. It was in the months after that win that Coolmore purchased 95% of him in a deal that reportedly valued the 3-year-old at over A$10m. The other 5% was owned by syndicate member Michelle Massey, an Australian lady who had been gifted the A$8,000 share by her sister, and she could not be convinced to sell her share, but more on that later.

Soon after Coolmore got involved, Starspangledbanner was dropped to sprint trips for his final three starts of the season, which yielded a victory in the G1 Oakleigh Plate at Caulfield over five-and-a-half furlongs and placings in the G1 Lightning S. and the G1 Newmarket H. at Flemington, performances that were sufficient to see him crowned Australian Champion Sprinter. After that, he was put on a plane to Ireland where he joined Aidan O'Brien in Ballydoyle to continue his racing career in Europe. With Australian sprinters such as Starspangledbanner's sire Choisir, Takeover Target (Aus), Miss Andretti (Aus) and Scenic Blast (Aus) having made a stunning impact in the Group 1 sprints at Royal Ascot in the preceding years, the prospect of a top-class Australian sprinter being switched to the care of O'Brien very much captured the public's imagination. Even considering the weight of expectations that followed him, Starspangledbanner very much justified the hype.

His first big engagement was the G1 Diamond Jubilee S. at Royal Ascot and despite having 11 previous Group 1 winners amongst his 23 rivals, he made all the running to record an impressive victory. He confirmed that form on the undulations of the July course at Newmarket when winning the G1 July Cup just three weeks later. He was dropped back to five furlongs for the G1 Nunthorpe S. at York for his next start and while there was much head scratching at the time after he was nailed close home by an unconsidered 100/1 shot Sole Power (GB) (Kyllachy {GB}), that rival's four subsequent Group 1 wins made that defeat much more understandable with the benefit of hindsight. While he met with defeat in his final start of the season in the G1 Haydock Sprint Cup, his earlier performances were enough to see him crowned European Champion Sprinter.

At the conclusion of the 2010 season, it was decided to retire Starspangledbanner to stud. All this time, the aforementioned Michelle Massey had been enjoying an incredible ride as the 5% owner of one of the top sprinters in the world, but she was now ready to cash out her share. With her remaining unwilling to sell it to Coolmore, she took the quite extraordinary decision to advertise her share in one of the hottest stallion prospects in Europe on the Australian bloodstock trading website bloodstock.com.au. From that advert, Massey ended up selling her share to Anthony Mithen, a former sports reporter whose family owned Rosemont Stud in Australia, for a sum reported to be in the region of A$1m. With that, Starspangledbanner embarked on his stud career at Coolmore for a nomination fee of €15,000 in 2011, but this is where the story takes the first of a series of unlikely turns.

Early on in Starspangledbanner's first season at stud it became evident that he was subfertile, siring just 33 foals in his first season in Ireland and 30 foals when shuttled to Australia later that year. With his problems by then common knowledge, Starspangledbanner only covered 22 mares back in Tipperary in 2012 and with interest in him understandably waning with few breeders willing to risk visiting a stallion with poor fertility, he was sensationally returned to training in Ballydoyle. However, returning to racing after spending time at stud is a notoriously tough ask for a stallion and Starspangledbanner was one of those that failed to recapture his best form, failing to win in six starts in 2012. At that point, one proposed course of action was to geld Starspangledbanner in an effort to help him recapture his form on the racecourse, but his 5% owner Anthony Mithen came to the table with an alternative proposal. He wished to stand Starspangledbanner at Rosemont Stud in the hope that a different environment and approach might help his fertility.

With little left to lose, Coolmore allowed Mithen to transport Starspangledbanner back to Australia for one last throw of the dice. In his first season in Rosemont in 2013, he succeeded in getting 24 mares in foal, but that still fell well short of what he needed to achieve to make himself any more than a risky novelty punt as a stallion. At this stage, most people had all but forgotten about Starspangledbanner. He had been written off as just another stallion with fertility issues that was too much of a risk to support. Then his first runners hit the track in 2014. From his first Irish crop of just 33 foals, Starspangledbanner made a simply stunning start. His first three runners all won and two of them, The Wow Signal (Ire) and Anthem Alexander (Ire), proved to be amongst the best 2-year-olds of their sex that season. The Wow Signal won the G2 Coventry S. at Royal Ascot and the G1 Prix Morny at Deauville, whilst Anthem Alexander won the G2 Queen Mary at Royal Ascot and was just touched off in the G1 Cheveley Park S. Since then, that small first crop has yielded eight more RPR90+ performers in Europe, including four more RPR105+ horses, most notably the very talented Group 3 winner Home Of The Brave (Ire).

Unsurprisingly, Coolmore were very keen to get Starspangledbanner back in Tipperary for the 2015 season, but in another dramatic turn of events, a bout of colic in late-2014 prevented him from doing so and it was decided he would remain at Rosemont Stud in Australia until the end of the 2015 Southern Hemisphere breeding season. While there was understandably more breeders willing to take a chance on him following the exploits of his first crop, Starspangledbanner was still operating at a sub-optimal strike rate of 50% for getting mares in foal. The results of his exploits in 2015 were 16 mares in foal to Northern Hemisphere time and 46 mares in foal to Southern Hemisphere time. At the conclusion of that season, he made his long-awaited return return to Tipperary late last year for the 2016 breeding season. One might have expected breeders to exercise caution in sending mares to a sire with such well-established fertility issues at the far-from-cheap covering fee of €15,000, but the Starspangledbanner story had another twist to offer. Despite those in charge of him reportedly not doing anything notably different with him other than restricting him to two coverings per day, in defiance of all veterinary logic Starspangledbanner started getting mares in foal with far greater success than he had previously from the outset of the 2016 season. Word started to spread of his improved fertility and by the time his breeding season had finished, he reportedly had got no less than 91 mares in foal, which is a simply mind-boggling return for a horse with his fertility history. It is a situation without precedent that has amazed even the most experienced veterinary and breeding professionals in Coolmore.

While Starspangledbanner's revelatory improvement in fertility resulted in him being sent mares owned by high-profile breeders such as the Niarchos family, Anne-Marie O'Brien and Croom House Stud amongst others this year, now that his new-found fertility has come to more widespread attention, one suspects the quality of mares he covers will take an even bigger leap forward in his coming season at Coolmore Australia and back in Coolmore in 2017. So, despite all the dramas, setbacks and misfortunes along the way, it looks as though Starspangledbanner will indeed get his chance to become a stallion of major commercial significance in the years ahead. It will seem a long wait to see his progeny that result from this season's coverings on the track, but it is likely to seem a lot shorter for the Coolmore team given how much of an emotional rollercoaster the horse has brought them on in the last number of years. Based on the stunning achievements of his offspring thus far, his future crops are very much likely to be worth the wait.