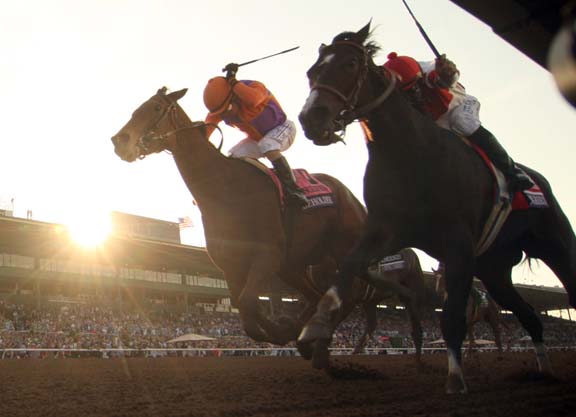 In a race for the ages, the sport's grand dame Beholder (Henny Hughes) just got her nose in front of the previously unbeaten sophomore star Songbird (Medaglia d'Oro) after a toe-to-toe, eye-to-eye stretch-long battle in the GI Longines Breeders' Cup Distaff at Santa Anita Friday. Coming into her third Breeders' Cup start, there were whispers Beholder had lost a step after suffering a pair of defeats to Stellar Wind (Curlin), and the crowd made last year's Breeders' Cup Juvenile Fillies winner Songbird its even-money favorite. Songbird broke well from the rail and assumed the early lead as Beholder, breaking from the outside in the field of eight, rushed up and over to chase the pace while three wide into the first turn. Songbird opened a clear lead after a quarter in :23.32 and a half in :47.16 as Beholder settled in the second tier. Gary Stevens began nudging Beholder leaving the backstretch and the three-time Eclipse champion shadowed I'm a Chatterbox (Munning)'s move to challenge Songbird after three-quarters in 1:11.14. Songbird and jockey Mike Smith still had a narrow advantage at the top of the lane and, while headed briefly, battled back to take the lead once again with a furlong to run and the scene was set for a battle royale. The two mares were inseparable as they battled stride-for-stride to the wire, with Beholder earning the grittiest of victories as Stevens raised his whip in triumph.

“She gave me absolutely everything,” said Stevens. “I have a new respect for Songbird, even in defeat. Beholder, even in the past, has never given me everything like she gave me today.”

Asked if he knew he had the race won, Stevens added, “I let out with a pretty loud holler three or four strides past the finish line, and both Mike and I both rode past the finish line a bit, because there's purple Breeders' Cup colors underneath the rail. So we were coming down, I had my head down, just riding for all I was worth. I'm thinking, man, that finish line's got to be coming. And all of a sudden I could see purple out of my peripheral vision, and I said, 'We're getting there. I'm in front.' When we stood up, I let out with a yell, and Mike looked over at me and congratulated me. When I saw the photo after the trophy presentation, it was closer than I thought it was. But they always are.”

Trainer Richard Mandella observed that racing fans have owner B. Wayne Hughes's sportsmanship to thank for keeping the great mare in training as a 6-year-old.

“I'd like to say, I think racing owes Mr. Hughes a hand of gratitude,” Mandella said. “Most people would have sold her or gone on and bred her and took the easy route.”

Hughes laughingly responded, “You know, I don't deserve that because I was afraid if I take her out, Richard would be dangerous.”

Still Hughes admitted Friday he was the lucky one.

“I don't think I'll ever have another horse like this, and so I'm very grateful to have been a part of it,” Hughes said. “I mean, I really compliment Richard. I don't know of any trainer that could have taken a horse for six years and done what he's done. But Gary has been a big part of it.”

Stevens, winning his 11th Breeders' Cup race and first since the 2013 Classic, also gave credit for Beholder's longevity to trainer Richard Mandella, whose nine Breeders' Cup wins have all come at Santa Anita.

“I've been in battles before, but never the length of the stretch,” he said. “I mean, it was a full almost 5/16ths, definitely a quarter of a mile of just a street fight. For six years old, I would just say the way that she's been managed throughout her career allowed her to do what she did on her final day of racing, and she laid it all on the line. The best of the best was training her, and he'd had this mapped out for a long time. The guy doesn't just get lucky. Things happen for a reason in that barn.”

Songbird, who had marched virtually unchallenged through the first 11 races of her career, lost nothing in defeat.

“She ran incredible and I'm so proud of her,” said jockey Mike Smith. “The real Beholder showed up today. That was probably the best race she has run in her life. My filly made her reach down as deep as she has. In losing, I feel like we won. We got beat a short nose. It's easy when you are winning and you have to take it when you lose. Beholder is retiring, but my filly will get bigger and stronger next year as they all do when they get older. She's a true champion.”

Trainer Jerry Hollendorfer added, “It was a great race. The fractions were a little slower than I thought they'd be early, but she still ran her race. She dug in through the stretch when the other mare came alongside of us. From where I was sitting, it looked like we got beat right on the wire.”

The bay mare came back even better than ever as a 5-year-old in 2015, winning three Grade I events and earning a shot at Triple Crown winner American Pharoah (Pioneerof the Nile) in the first-ever Breeders' Cup Classic at Keeneland with a spine-tingling 8 1/4-length victory in the GI Pacific Classic. But the match-up was not be, as Beholder spiked a fever after shipping to Lexington and missed her second straight championship weekend.

After opening 2016 with a pair of victories, Beholder stumbled for the first time in two years when finishing second to Stellar Wind in the July 30 GI Clement L. Hirsch S. She lost nothing while finishing second behind Saturday's Classic favorite California Chrome (Lucky Pulpit) in the Aug. 20 Pacific Classic, but was nipped once again by Stellar Wind in the Oct. 1 Zenyatta.

Despite the three straight losses, Mandella was full of confidence going into Friday's Distaff. “Anybody that saw her train would have had the same confidence,” Mandella commented. “People would come out of the stands and tell me what they saw on the TV. So it wasn't hard to see. She was really at her best.”

The Distaff was marred by the breakdown of Corona Del Inca (Arg) (Luhuk). “Sadly the radiographs of Corona Del Inca revealed that she had a much more serious injury than it was apparent on the racetrack,” A.A.E.P. on-call vet Dr. Scott Palmer said in a statement. “She suffered a lateral condylar fracture of her right foreleg, a sesamoid fracture and a fracture of the first pastern bone. The nature of these injuries was so severe that there was no way she could be kept comfortable nor the prognosis be good for treatment. For those reasons she was euthanized.”